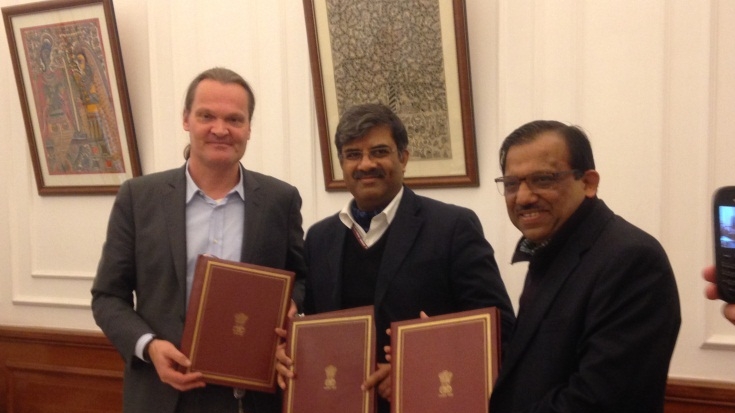 The agreement was signed by Onno Ruhl, Nilaya Mitash, and Rakesh Sharma.

About 2,500 permanent disaster resilient houses to be built and about 3,600 km of roads to be reconstructed

NEW DELHI - The government of India, the government of Uttarakhand and the World Bank today signed a $250 million credit agreement for the Uttarakhand Disaster Recovery Project to support the state in its post disaster recovery plans as well as strengthen its capacity for disaster risk management.

“In keeping with the government of India’s commitment to disaster risk mitigation at the national and state levels, this project will focus on the post disaster recovery plans in Uttarakhand as well as improve the resilience of the state’s infrastructure and that of its communities from the impacts of such disasters in the future,” said Nilaya Mitash, joint secretary, department of economic affairs, ministry of finance.

The Uttarakhand Disaster Recovery Project signed today was fast-tracked under the World Bank’s emergency procedures and was prepared within a three-month period.

A Joint World Bank and Asian Development Bank team conducted a Rapid Damage and Needs Assessment (JRDNA) at the request of the government of India to rebuild the state’s infrastructure and assets lost in the June 2013 disaster. The JRDNA, conducted in close collaboration with the government of Uttarakhand, estimated the physical damages across a range of sectors and calculated the cost of reconstruction at about $661 million. The sectors covered included housing and public infrastructure; roads and bridges; water supply and sanitation (both urban and rural); livelihoods (in agriculture, fisheries and medium and small-scale enterprises); tourism; energy; and the environment.

“Disasters, like the one we witnessed in Uttarakhand, can roll back decades of development and are a fundamental threat to economic development and the fight against poverty. This project will focus on both reconstruction and disaster preparedness. It will help the government of Uttarakhand with immediate relief efforts by building houses and public infrastructure including rural connectivity and bridges. A very important part of the project will be to help the state be better prepared for the future. Disaster preparedness work will include putting in place information and communication systems that can provide early warning to people likely to be impacted,” said Onno Ruhl, World Bank country director in India. “In Uttarakhand, the challenge is to build smarter, so that they do not undermine the fragility of the environment. This project will incorporate lessons from previous national and global post-disaster recovery projects to ensure that recovery is targeted, effective and more resilient to future disasters,” he added.

From June 15 to 17 this past year, Uttarakhand, endowed with vast natural resources and one of the most frequented tourist and pilgrimage destinations in India, suffered unprecedented rainfall devastating the towns of Kedarnath, Rambara, Gaurikund and others. According to official government figures, over 4,000 human lives were lost; 4,200 villages were affected; more than 3,300 houses were fully damaged; close to 9,000 km of roads were affected; and 85 motor bridges and 140 bridle bridges were damaged. This event also left over 70,000 tourists and 100,000 local inhabitants stranded in the upper reaches of the state.

Some of the key components of this project include the reconstruction of damaged houses and public buildings; reconstruction of damaged roads and bridges; and enhancement of the technical capacity of the state for managing future disaster risks. About 2,500 permanent disaster resilient houses will be built under this project. About 3,600 km of damaged village roads and about 675 km of other district roads will be reconstructed. About 440 km of bridle roads and about 140 bridle bridges that facilitate pedestrian connectivity for villages located in remote areas will also be reconstructed.

“While reconstruction is a key component of the project, globally there is evidence that disaster recovery programs  offer the opportunity to focus  on better adaptation, preparedness and in building resilience for the future through other complementary investments such as disaster risk modeling, enhanced weather forecasting and early warning communication systems. This can not only help in saving lives and livelihoods but also in long-term disaster risk reduction,” said Saurabh S. Dani, senior disaster risk management specialist and the task team leader for the project.

Hence, the reconstruction of the state’s early warning infrastructure will be an important component of the project and will enhance the capabilities of the government entities and others working on risk mitigation and response. It will also focus on strengthening the capacity of the state’s disaster response force, fire services personnel and other key agencies in responding adequately to disaster situations through better search and rescue equipment and enhanced training.

The project will be financed by a credit from the International Development Association (IDA) – the part of the World Bank that helps the world’s poorest countries – which provides interest-free loans with 25 years to maturity and a grace period of five years.