World Bank approves $360 million to strengthen and modernize water sector in UP, India’s most populous state

About one million farm families will benefit

WASHINGTON, August 28 2013 ­­­­-- A $360 million credit to India’s most populous state, Uttar Pradesh (UP), was approved by the World Bank Board of Executive Directors today to help build the institutional capacity needed to increase agricultural productivity in this low-income state where agriculture will continue to play an important role in alleviating poverty.

With a population of approximately 200 million, UP lags behind most Indian states across a number of human development indicators. Currently, over 50 million people live below the poverty line, the majority of them in rural areas. Agriculture accounts for about 30% of the state GDP and 60% of total 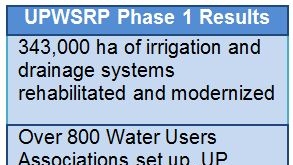 employment. The rural population is dependent for its livelihood on the agriculture sector which grew at a mere 1.3% each year between 2001 and 2007.

“Investing in agriculture will help reduce poverty in UP. More importantly, improving water use efficiency will not only help the agriculture sector – by far the largest consumer of water in India – but also address the growing mismatch between water demands and use patterns, a critical problem that cuts across many development challenges in UP, and India more generally,” said Onno Ruhl, World Bank Country Director in India. “This is the first project being delivered under the new Country Partnership Strategy for the World Bank in India, which has committed to working towards fostering inclusive growth in low-income states like UP, a state with the largest number of poor in India.”

An earlier World Bank assisted project, the Uttar Pradesh Water Sector Restructuring Project Phase 1, which closed on 31 October, 2011, developed a multi-faceted long-term program covering a 15-20 year horizon. The Uttar Pradesh Water Sector Restructuring Project Phase 2, approved today, will strengthen various water institutions set up under Phase 1 and help rehabilitate and modernize critical irrigation and drainage infrastructure in identified areas.  The project will be implemented in 16 districts[1] identified by the UP government as priority areas. The project will impact over one million farm families and strengthen over 2000 water users associations.

The project will also support the Government of Uttar Pradesh’s efforts to consolidate and deepen its various institutional reform initiatives such as the Participatory Irrigation Management (PIM) Act. During Phase 1, the PIM Act played a transformative role in giving water user associations (WUA) greater responsibility in managing waters available for their farms. The WUAs are also playing a greater role in managing the operations and maintenance (O&M) of local systems, resolving conflicts amongst competing users and assessing water charges.

“Based on our experience in the first phase, we will expand the rehabilitation and modernization of the state irrigation and drainage system to newer areas identified by the government of Uttar Pradesh,” said Winston Yu, senior water resources specialist and the task team leader for the project. “This, we hope, will not only improve agricultural performance, but also improve water use efficiency.”

Some of the other important initiatives that will be taken up in this phase include a specialized flood management information system (FMIS) as more than 30% of the total geographical area in 23 districts of UP is flood-prone. Extensive use of modern technology such as satellite remote sensing, GIS, and mobile-based applications will be employed.  As part of the project’s innovative design, the Uttar Pradesh Remote Sensing Applications Center will monitor agriculture areas using satellite technologies.

The project also plans to develop an integrated water resources information system hosted by the State Water Resources Agency (SWARA) since water resources are currently being planned, developed and managed by different departments in the state. A web-enabled GIS-based Integrated Water Resources Information System will be developed under this project.

To promote water saving agricultural practices, the project will set up farmer water schools. These schools will help farmers over an entire cropping season to improve their management practices.  These may include piloting ridge and furrow irrigation, training on crop-water budgeting, laser leveling, and using raised beds. These schools are expected to create a network of trainers and practitioners from the field who can then spread these practices amongst the local communities.

The Project will be financed by a credit from the International Development Association (IDA) – the World Bank’s concessionary lending arm – which provides interest-free loans with 25 years to maturity and a grace period of five years.