What Is the Cost of Crony Capitalism for Ukraine?

The Revolution of Dignity sparked by the then Government’s decision to suspend the signing of the association agreement with the EU reflected widespread discontent over deep-seated corruption. From its independence over two decades ago, Ukraine has struggled with corruption and state capture. Oligarchs dominate large sectors of the Ukrainian economy, extracting rents and exerting their influence on the state through representation in the Parliament.

This has allowed oligarchs to tap into rich sources of corruption, including in energy, public procurement, privatization of state assets and tax administration. These governance failures have created an economy largely built around redistribution of rents (excess returns above the normal levels that are generated in competitive markets). The model of economic governance in which policy decisions are subject to undue influence of a small number of businesses is called “crony capitalism”.

This is not news for Ukrainians. Mass media and civil society organizations frequently investigate cases of corruption and political connections. Rather than looking at specific cases of state capture, recent World Bank research has focused on identifying the impact of crony capitalism on Ukraine’s economic performance. Our team has asked: What is the extent of political connections among Ukrainian firms? Are these political connections associated with different outcomes for the connected firms? The research produced some striking results.

First, politically connected firms are prominent in Ukraine’s economy. A firm is considered connected if it has at least one politically exposed person among its owners, shareholders or managers. A politically exposed person is someone who has been entrusted with prominent public functions, including senior politicians and party officials, senior government, judicial or military officials, and senior executives of state-owned enterprises. In Ukraine 2 percent of firms are politically connected, but they control over 20 percent of the total turnover and over a quarter of the assets of all Ukrainian companies. 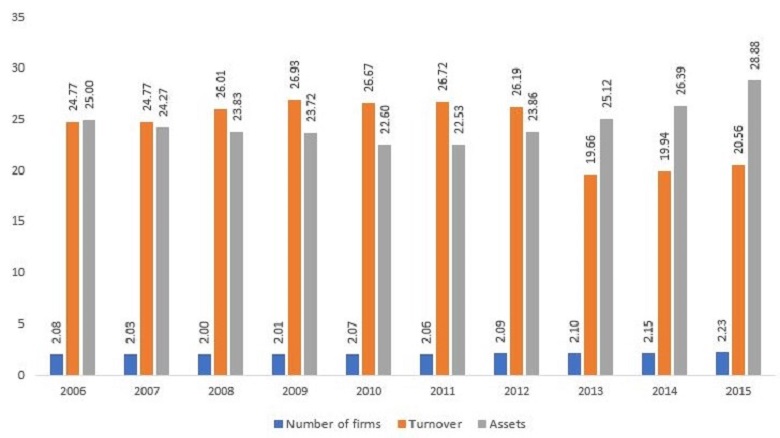 Second, over the past two decades politically connected firms used various channels to access economic rents: public procurement, subsidized loans, transfers from the budget, trade regulations that restrict imports, privileged access to state assets through privatizations, and beneficial tax regimes.  Looking at the VAT refund process from 2016 to March 2017, the analysis revealed that a politically connected firm is 61 percent less likely to be audited than a non-connected firm. The single VAT refund registry introduced in April 2017 introduced by the Government should help in ensuring fair treatment for all companies.

Third, there is a strong negative correlation between political connection and productivity. Politically-connected firms are larger and employ more people, but they are less productive and grow slower in terms of turnover and job creation. While this research was not able to establish whether being politically connected is the cause for lower productivity, one can still engage in a thought experiment and estimate what would be the impact on the economy of eliminating all political connections, leaving non-connected firms in place of connected ones. In this scenario, Ukraine would grow 1-2 percent faster than in the current situation with 20 percent of turnover produced by connected firms.

Finally, our analysis showed that despite the clear economic cost of crony capitalism, the ultimate success of economic reforms in Ukraine will depend in large part on overcoming resistance from vested interests to any efforts to establish a rule-based system and regulations. The establishment of the anticorruption framework with the National Anti-Corruption Bureau, Special Anticorruption Prosecutor Office, and the use of electronic procurement system Prozorro have been the first steps in this process. Independent anticorruption court should be next step to complete the anti-corruption framework as envisaged in the corruption prevention law.

Ukrainians now have heightened expectations that the government will deliver on its promise of real change and transparent governance.  These expectations are the strongest counterweight to oligarchic power and state capture.  An engaged and vocal citizenry is Ukraine’s best bet at breaking the vicious cycle of crony capitalism.