Interview with Elisabetta Capannelli, World Bank Country Manager for Croatia and Slovenia, originally published in the print version of Poslovni Dnevnik on October 12, 2017.

Elisabetta Capannelli, the new World Bank Country Manager for Croatia and Slovenia, in her first interview for the Croatian media, talks about growth, the introduction of the euro, etc...

Poslovni Dnevnik: How do you asses the growth and the recovery in Croatia?

Elisabetta Capannelli: We are glad that after six years of recession, growth in Croatia has finally picked up. Last year it was 3 percent, while this year we forecast 2.9 percent. This is a good sign, but the question is whether it is sustainable, what it consists of, and if it is reaching all citizens? We estimate that the current growth potential is not enough for a new EU member state. Three-percent growth, even if sustained, which is not guaranteed, will not bring the country to the desired level so that people can reach the European average income and see similar employment opportunities. 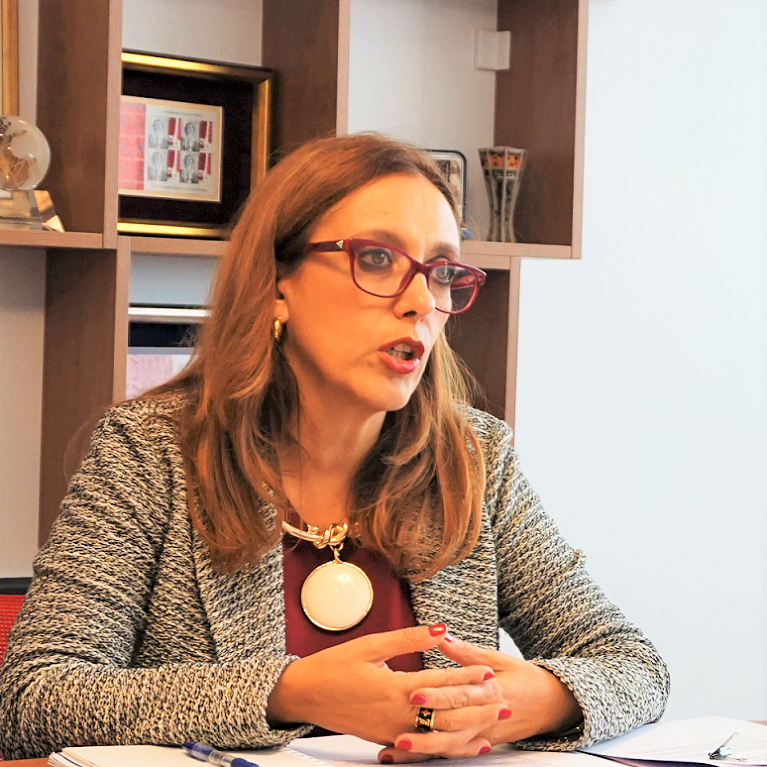 Elisabetta Capannelli
GDP is recovering, but mainly thanks to personal spending due to fiscal relaxation. It is not bad to have growth driven by personal consumption, but that's just not enough. You need to change the generators of growth, which can be done by reducing the public sector and having a greater presence of the private sector. A private sector which should be more productive, more dynamic, with more added value. It is fine to have tourism revenues equal to 20 percent of GDP, but the question is whether you want tourism to be the generator of growth or whether this should be a dynamic and strong private sector able to compete at the European level?

PD: Do you agree with Governor Vujčić's assessment that Croatia has stopped catching up with comparable countries?

EC: Yes, I share his opinion. Before the crisis, Croatia grew because of private investments and foreign capital inflows. Now capital is returning, but the question is what do you want to do with that capital? If you want to change the structure of the economy, it is necessary to increase the productivity of labor and industry. This does not necessarily have to be the processing industry. The focus could be on services, innovative sectors, or IT, like Romania, which, by focusing on a targeted removal of barriers, grew faster than other countries, including Croatia, and made more productive use of its natural resources such as agriculture. As a newcomer, it seems to me that Croatia has not decided what it wants to be, which model of growth would help it achieve its goals and it has not implemented the policies to reach these.

PD: A public debate on the euro is forthcoming. The financial sector is supporting the euro. What are your views?

EC: When Croatia joined the EU, it committed to introducing the euro at a pace that will benefit the country, so it is important to have a public debate. Croatia is a highly 'euroized' country, so the introduction will not make as big a difference as it would in countries that are not so closely linked to the euro. Your monetary policy is already aligned with the European Central Bank policy and is not used to achieving competitive depreciation. Being part of the Eurozone allows you to have a bigger market - another barrier to trade is abolished, monetary policy is harmonized. In short, it is good to be part of a larger group. This has been the experience of most new members. But this is not about having good numbers on paper, it is about having good institutions that will make membership sustainable. This involves many things, including other regulatory bodies, the judicial system, a strong administration, and a good management system.

Even before entering the Eurozone waiting room, the ERM II mechanism, Croatia needs to ask itself whether it has adequate institutions to be a resilient Eurozone member that will behave proactively. Concerning the banks, let us hope that entry into the Eurozone will expose them to greater pressure from competition - to the benefit of consumers.

PD: The Doing Business report is a 'checklist' for reforms. Which priorities should be addressed first?

EC: I support initiatives such as the removal of 100 unnecessary barriers, but a list of priorities must be drawn up and ticked off one by one.  Just look at countries which have successfully dealt with this, such as Romania. It abolished barriers for foreigners investing in IT. It is important to not do everything at once, to set up a 'benchmark', expose yourself to the public, and clearly say that you will remove one barrier at a time.

Then, the tax burden should be reduced, which has proved useful in attracting businesses to certain segments. You need to choose which sectors you want to focus on and allow preferential conditions, such as a the reduction of VAT. But for that, one has to decide on, and design, the policies since the current model of broad-based provision of incentives is not producing results. It seems to me that people know what needs to be done, but the problem lies in the implementation.

PD: How can this be accomplished when each new administration shoves the projects of its predecessors into a drawer?

EC: It is crucial to have a consensus between the private and public sectors, civil society organizations, and the government about the focus on specific areas. Croatia is at a difficult crossroad; you entered the EU by consensus, having completed many reforms. At the same time, there remains a lot of the "legacy" of the past. You have become what we call 'the country of an unfinished reforms agenda', which is not a term that the World Bank likes to use, but, unfortunately, this is the case.

Lack of implementation of reforms creates enormous pressure for Croatia to move forward. For example, the railway reform being discussed today is similar to those implemented by other countries ten years before they entered the EU. Croatia initiated some steps, such as the model of managing companies in the railway sector, and then it changed its course. You appoint managers on paper, but they are accountable to a management board controlled by the government and they cannot act like the private sector in the decision-making processes. Investments in the railway sector are not achieved because of the way companies are managed and controlled by politics or interest groups.

PD: Fiscal consolidation has started, public debt has been reduced. How do you asses fiscal risks such as negotiations with trade unions or the law on war veterans?

EC: The government should definitely be commended for its fiscal consolidation efforts, as this was one of the reasons for a six-year recession. Today, it is important to curb the deficit and sustain the debt reduction trend, which, at 84 percent of GDP in 2016, is still very high. But we expect 76 percent by 2019. We see huge internal pressure on this government to increase allocations for sectors that are not necessarily the most productive, to take care of particular groups rather than looking at the society as a whole. Look at the recent debate on the new war veterans law, which further expanded their rights and benefits, or expenditures on collective agreements, for example, for the railways workers. Employees must be protected, of course, but the railway sector cannot be used solely to hire people. This is no longer happening anywhere else.

Tomorrow, more pressure can come from other interest groups. It is more important to look at equity, to protect people by targeting benefits instead of distributing them across the board. We have conducted detailed analyses that point to the existence of deep pockets of poverty. The society is becoming marginalized and inequalities are increasing. This is where the government has a role to play - to care for the poorest and provide for those who cannot be active members of society.

PD: How big a risk is Agrokor? Was ‘Lex Agrokor’ a good solution?

EC: I cannot comment on 'lex Agrokor.' The Bank gave its opinion when the decisions were being made. The government was facing a daunting problem of debt - which amounts to about 11 percent of GDP - and had to react quickly. When a country deals with such a big potential bankruptcy, there is no perfect solution. It is necessary to react quickly to reduce systemic risk. New bankruptcy laws are a novelty in Europe and implementation is very tough. The situation now is much better than before, but fiscal risk should be taken into account. We believe that the Government must be extremely conservative and count on a possible fiscal impact from Agrokor.

PD: Can the materialization of fiscal risks return Croatia to an excessive deficit procedure?

EC: In the next few years the government should address the issues of heritage, such as the transport sector, and not shy away from necessary steps. A lot has accumulated for fear of confronting some interest groups. No one can foresee whether the impact will be so large as to push the country back into the EDP. I think that the finance minister has the situation under enough control to avoid that scenario. But he needs the help of the entire government to avoid creating unnecessary pressures on public finances.

PD: The World Bank would guarantee the issuance of a bond that the state would use to refinance debts of road companies. What is the status of that project?

EC: In April, we approved a EUR 22 million loan and a EUR 350 million guarantee for the project. The idea is to send a clear signal that the government is serious about refinancing and that it is transparently working on the issue with the World Bank. The problem is that a large amount of debt with high interest rates are due in the short term, which is unsustainable. Our role in the process is to, through our participation, help the government secure the best possible financing terms. The result is that creditors are coming to the table without unreasonable demands, knowing that a necessary restructuring of companies has been initiated.

So far, we have positive feedback from everyone and it is possible that by the end of the year, the refinancing and the debt restructuring will be carried out. Various options for bond issuance are being considered, with a more favorable interest rate and a 15 to 20 year maturity. In the market, especially the local one, there is interest from banks to form a consortium that would enroll the issue. Concerning the interest rate, it is important for the Government to reach investment grade. With this kind of refinancing, Croatia may strive for an investment rating, with or without the use of the WB guarantee, which would far outweigh the effect of a lower interest rate.

The guarantee may or may not be used, it is the Government’s decision. The guarantee is to provide maximum benefits, but it should be noted that it is only the first stage; The government must carry out a significant new refinancing in 2019 that needs to be prepared in advance, for which it can count on the support of the World Bank.