These events are particularly timely as the toll from air pollution is becoming increasingly apparent across the world, especially for low and middle-income countries. Those of us living in polluted cities see evidence of the burden of air pollution all around us. That many of our fellow city dwellers choose to wear masks serves as a daily reminder that we are breathing polluted air. 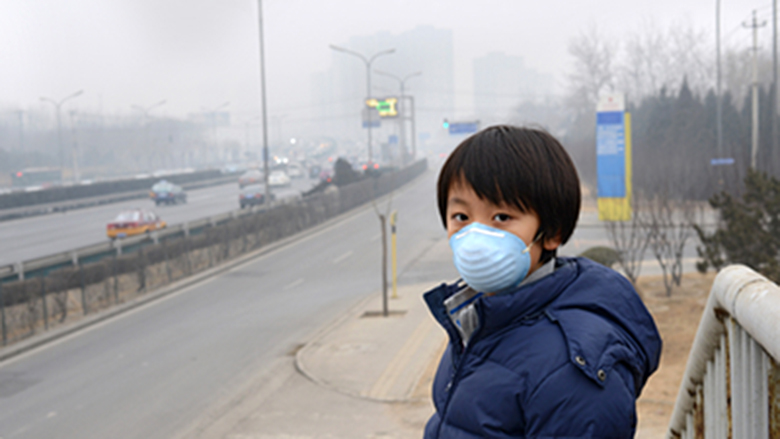 Over the past five years, the Chinese government has been focusing on addressing PM2.5, particulate matter with a diameter of 2.5 micrometers or less, which is the most critical pollutant for public health. In 2012, the government issued stricter standards for ambient PM2.5 concentration, which went into effect in January 2016 and are comparable to standards defined by the World Health Organization. The 13th Five-Year Plan (2016-20) has set the target of reducing PM2.5 concentration by 18 percent. This is the first time PM2.5 targets have been included in a five-year plan. China is establishing the most extensive air monitoring system in the world, which is already covering 338 cities nationwide.

While air quality has improved over the past years, levels of air pollution are and will remain high causing economic and social costs. To continue improving the air quality across China's cities, China needs to address three key challenges.

First, there is a need for an effective regional air quality management mechanism. Wind can carry air pollution more than 500 kilometer from its source, so pollution caused in one province may be blown into another province. Indeed, 20 to 40 percent of PM2.5, the main form of air pollution in China, comes from outside the affected province or city. The Beijing-Tianjin-Hebei region has developed a mechanism for sharing air quality information. This could provide a platform for increasing regional-level planning and commitment setting while implementation remains at the local level.

Second, there is a need to strengthen monitoring and analysis of additional sources of pollution. Some sources of pollution, such as coal-fired power plants, heavy industry, road vehicles and construction sites, are well known and well understood. Other sources, such as agriculture and livestock waste, biomass burning, rural stoves and off-road heavy equipment also contribute significantly to pollution, and require better monitoring and further analysis. This is important because there are chemical interactions between emissions from different sources, like road vehicles and agriculture, which worsen pollution. In the end, regional air quality management plans require a multi-sectoral approach that includes all these sources. Such an approach brings additional benefits of making those sectors more efficient and competitive.

Third, there are cost-efficiencies to be gained from coordinating air quality management and climate change policy. The synergies between carbon emissions and air pollution are well recognized; however, it is important to realize that there are discords too. As such, we cannot assume that a reduction in carbon emissions automatically improves air quality. A clear example of discordance is Europe's shift from gasoline to diesel vehicles. It is true that diesel vehicles emit 15 to 20 percent less carbon dioxide; however, they also emit about 20 times more nitrogen oxides compared to gasoline vehicles, which is a contributor to air pollution.

Chinese authorities realize that reducing air pollution is a long-term process which can be accelerated by benefiting from lessons learned from other countries which have already reduced their air pollution to accepted levels. At the same time, the Pollution Management and Environmental Health Business Week will provide an opportunity for other countries to learn from China's recent experience in implementing and strengthening air quality management policy.

The author is the World Bank's lead environmental specialist for China.