Is it Fair that 80-85 Percent of Personal Income Tax Collections is Formed through Those Earning Less than AMD 120 Thousand Income per Month?

July 1, 2016
168 Zham (168 Hours) Daily
" When I say that the Tax Code is a good document, I don’t mean to say that what is written will be sufficient: the Tax Code must be enforced and implemented the same way as it is written.  " 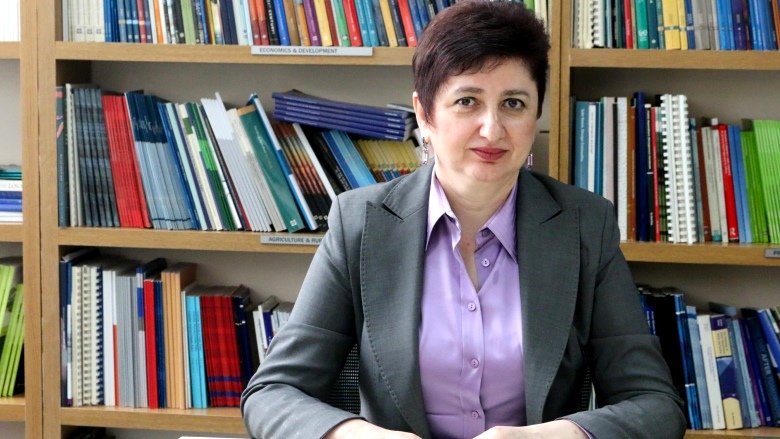 Interview with Ms. Gohar Gyulumyan, Senior Economist of the World Bank Yerevan Office on the Tax Code, which recently passed its first reading at the National Assembly

Ms. Gyulumyan, while the draft Tax Code (TC) has passed its first reading, some of its provisions were severely criticized by MPs from both opposition and ruling fractions. What is the World Bank’s assessment of the TC version in its first reading?

First, I would like to mention that we worked with the respective government counterparts starting from the early stage of analysis through the last stage of finalization of the draft Tax Code. We provided technical assistance, which helped to simulate various scenarios in terms of the adaptation of international experience, its implications, the design and rates of various tax types. It was a purely technical, analytical work aimed to help the authorities’ decision-making.

Some of our recommendations were accepted, others - not.  Nevertheless, the version of the TC, which was sent to the National Assembly had received the positive opinion of the WB experts. And we say ‘positive ’ or ‘negative’ not in their abstract sense but based on certain principles: to what extent the TC with the proposed tax policy  and administration principles is commensurate to the challenges that Armenia is facing today, to what extent it will:

(a) contribute to addressing these challenges, (b) the transparency and effectiveness of the system will increase, (c) the fundamental principles of taxation - horizontal and vertical equity will improve,  and (d) broader opportunities for tax revenue mobilization will be ensured without compromising the equity principle? All of the provisions were reviewed from these stand points. And I can assure that in our judgements we relied on both official statistics and survey data.

State Revenue Committee (SRC) Deputy Chairman Vakhtang Mirumyan mentioned in the Parliament that the positive effect of the TC on the State budget revenues was estimated to account for 1.8% of GDP. This means that it will lead to an increased tax burden. To what extent it will contribute to the development of the economy? You are referring to its positive effects but will the positive effect be equivalent to losses they talk about?

Yes, the overall fiscal effect of the TC is assessed to be equal to 1.8% of the 2015 GDP. It is a fixed figure: around AMD 90 billion. But I would like to stress that this effect will take place during the period of 2017-2021, because the changes will come into force gradually and not all at once.

So, the increase of the tax burden by AMD 90 billion will not happen during the first year?

Let’s clarify. In the National Assembly the raised question was:  what would have been the increase of actual tax collections for 2015 if the TC became effective in January 1, 2015? The answer was: the positive effect on budget revenues is 1.8% of GDP. It appears that the answer was not complete because during the first year of implementing the TC the tax burden increase will be less, won’t it?

The SRC Vice Chairman, in my opinion, meant the hypothetic situation when all of the provisions would become effective on the same date. But this cannot be the case. One should take into account of the economy’s ability to ‘digest’. A tax legislation, suggesting a change equivalent to 1.8% of GDP, cannot be implemented all at once. It should be done in the course of several years so that taxpayers and consumers are able to adapt to the new situation. Therefore, the time span of 2017-2021 was chosen, i.e., there will be a gradual increase of the burden. And the excise tax will be introduced at an earlier stage, because this process will not be associated with any technical complexities.

As a matter of fact, the proposed change in the tobacco and alcohol excise tax is among the most criticized ones. Why?

I know. I am following the discussions at the National Assembly and other platforms, and the focus is on several issues: the personal income tax, dividend taxation and the reduction of the VAT taxation threshold in the SME sector. As to the change to the excise tax on cigarettes, it has its emphatic opponent with its apparent motivation.

An opponent in the tobacco business?

It's not a secret that Armenia is a tobacco manufacturer/exporter and importer. It should be also noted that there are high and low price segments of tobacco. The local manufacturer operates in the lower price segment. The TC proposes a design change in the excise tax: the current design of the excise tax contains only a fixed component, whereas the one proposed in the draft Code also has a value-linked component. And if the value of cigarette goes up, the tax burden will also increase, and the increase will be more significant for the imported cigarettes, which belong to the higher price segment. The TC stipulates that during 2017-2021 the tobacco excise rate will grow by 15% annually.

Moreover, changes to the excise tax on tobacco were to be initiated anyway, irrespective of the Tax Code, due to Armenia’s accession to the Eurasian Economic Union (EEU). The point is that in Armenia the rate is very low compared to other EEU states, and the issue that, over several years, Armenia should consistently increase the rate was part of the agenda of the Eurasian integration processes. And with the changes stipulated in the TC, in 2021, the tobacco excise tax rate will still be lower than in Russia. However, it is justified because Armenia belongs to a lower income grouping of countries compared to Russia and Kazakhstan.

As I mentioned, imported tobacco is in the higher price segment, and the excise tax increase will have an adverse effect for the importer.

Let’s talk about the personal income tax (PIT). Here also the criticism is focused on its higher rate and the issue of replenishing the budget at the cost of medium and medium to high wage earners.

The proposed change to the personal income tax will have a neutral effect on budget revenues. Additional budget receipts of only AMD 1-1.8 billion will be ensured which, in my opinion, is insignificant. The main change in the PIT rate and design aims to improve the tax progressivity. If we assume that the PIT in Armenia should be progressive, then its design should be so as to ensure such progressivity. The PIT structure, which has been applied since 2013, at first glance seems to have a progressive design with 24.4%, 26% and 36% rates. However, note that 24.4% and 26% represent a very weak progressivity design.

The first and second brackets are very close to each other (by 1.6 points), and the third one is very high (by 10 points). It appears that today, according to actual data, high income earners easily split their incomes to comply with the second or even the first thresholds. When we analyze the actual PIT collection data, we come up with actual 25% PIT rate. This is the first deficiency. Now a scale of 23%, 28% and 33% is proposed, i.e., the difference between each of these three thresholds is 5 points. And this transition aims to stress progressivity.

The second deficiency of the existing system is rather global by nature. In particular, according to the applicable tax legislation, in Armenia there is no personal income tax as such. In essence, it is a payroll tax. Thus, if we consider the structure of household incomes, the weight of wage is high on low income groups and, on the opposite, it is low for those with overall high income, because they have other incomes, too (dividends, interest earnings, etc.). \

In other words, in this country the notion of the personal income tax has been equalized to the perception of payroll tax. When we say 'income tax', it should apply to all incomes. All declared incomes should have their fiscal implications that, in reality, is not ensured. It appears that the system of income and property declaration is ineffective. People declare their incomes, and then there is no fiscal implication - no one seems to be interested in this information.

The interview was conducted by Babken Tunyan.