How Much Does It Cost to Fall Ill?

Falling ill costs money. But how much you have to spend out-of-pocket depends on where you live. In Europe, with well-developed social insurance, out-of-pocket spending is typically capped, something that the Affordable Care Act has tried to replicate in the United States.

But this does not mean that out-of-pocket expenditure on health care is affordable. In Central and Eastern Europe, the slowdown in growth and the need to rein in fiscal deficits has meant that many countries have started placing a greater share of health care costs on sick individuals. As a result, out-of-pocket payments have risen to uncomfortably high levels in some countries. While informal payments or bribes have attracted much attention, the higher levels of cost-sharing associated with ill health goes unnoticed.

Figure 1. Out-of-pocket spending on health as a share of GDP per capita (current 2012 $) 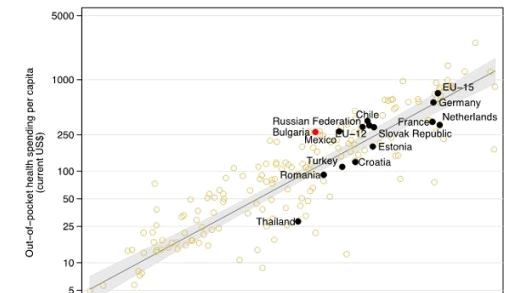 In Bulgaria, roughly half (47 percent) of total health spending is paid for out-of-pocket. The World Health Organization regards 20 percent as a “poverty” threshold for share of out-of-pocket spending.. In health systems where this share is above 20 percent there is a greater risk that the system cannot protect sick people from falling into poverty because of the need to meet unexpected health costs. In Bulgaria this share is not only above 20 percent, it has risen over time (Figure 2). Many other countries in Central and Eastern Europe have seen an increase in the share of out-of-pocket spending, but in no case has the increase been as great as in Bulgaria. Outside the EU, countries such as Turkey, Thailand, and Chile, which all started at comparable shares of out-of-pocket spending, have moved in the opposite direction: lowering spending out-of-pocket to provide greater financial protection.

Figure 2. Changes in out-of-pocket spending as a share of total health spending, 1998-2012 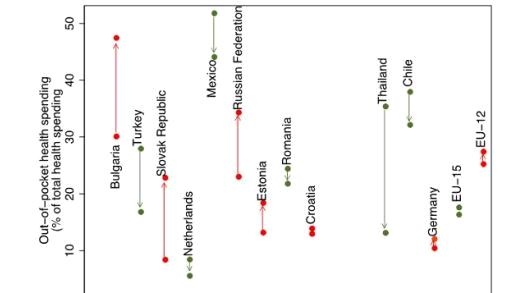 In Bulgaria, the need to meet a significant share of health care costs out-of-pocket places a greater burden on the poor, and this burden has risen over time. Among the bottom 20 percent of the population, spending on health care is around 6 percent of monthly expenditure. This share rises to 7 percent for the second quintile—suggesting that spending may be restrained by available resources for the poorest—before falling to around 4 percent for the richest 20 percent. Since 2010, the share of monthly spending devoted to health care has risen for the poorest quintiles, and fallen for the richest. Given this, it comes as no surprise that all of the countries in the EU, Bulgaria ranks second in terms of the proportion of the poor who report they have foregone medical care (over 20 percent report this to be the case, second to only Latvia.)

Given the high share of out-of-pocket spending, what can be done to protect the poor? The first and perhaps most important step is to acknowledge that the health system provides poor financial protection for the poor. In the specific case of Bulgaria, where the bulk of out-of-pocket spending is on medicines, the high cost has to with the way medicines are priced (with not enough attempt to drive prices down to levels found in other countries at similar income levels) and prescribed (not enough consideration to cost-effectiveness in treatment). Improvements in pricing and prescribing can lower costs. The way pharmacies handle prescriptions also drives up costs to the consumer because of restrictions on substitutions and public distrust of cheaper generic medications. This too can be changed. Loopholes in the billing process (extra-billing, referrals to uncovered private services, etc.) can raise out-of-pocket payments at hospitals. These would need to be curbed. Finally, despite the social-insurance nature of the health system, there is no effective “cap” to protect patients from high out-of-pocket expenditures in the event of with serious illness. This would need to be established and brought fully into force. All of these measures would bring about a rebalancing between public and out-of-pocket spending, and protect the poor.

Falling sick does not need to be unaffordable. The design of cost-sharing arrangements deserves close attention because high out-of-pocket payments can push households into poverty. It can also affect the ability of poor households to manage chronic disease. In aging countries like Bulgaria, where there has been limited improvements in longevity, making health care more affordable would not only contribute to greater equity, but would also have an impact on labor force size and productivity.