Quality and Lack of Resources – Two Challenges in Education, in Romania

The quality and the lack of resources represent two of the Romanian challenges in the area of education, believes Cristian Aedo, Acting Practice Manager for Europe and Central Asia within the World Bank.

He told us in an interview that, in our country, four out of ten employers questioned (i.e. 40%) think that the skills with which youngsters exit the education system and enter the labor market represent a constraint for firms.

The World Bank representative also specified that he noticed a difference between Romanian students and those from OECD, "the first being 50 points under the average of the OECD states, at Mathematics, which is equivalent to one study year": "Thus, we can say that 15 year old students from Romanian schools are, in average, one year behind students of the same age from OECD".

Compared to the Polish students, the Romanian students are one year and a half behind, from the competences point of view, he has also asserted. 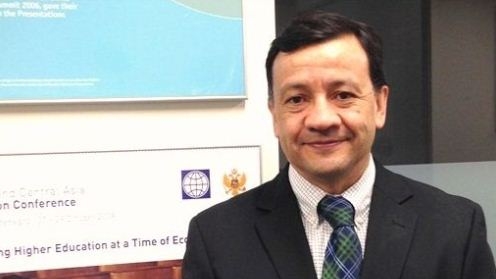 B: What educational projects is the World Bank carrying out in our country?

Cristian Aedo: In Romania we have a long partnership history, with good results. In the past, we had four projects on several educational segments, like pre-schooling education, higher education and research, education in the rural environment. Currently, we are having discussions with the government to support the authorities in implementing, as priority areas, the high school education and the transition to university.

The Ministry of Education has established as a priority to support the pupils in completing their high school studies and succeeding at the baccalaureate, and to support the students entering the first academic year with measures for reducing drop-out and for continuing their studies.

We also have four projects of advisory services in Romania. We support the government with knowhow in preparing strategies for increasing the number of persons attending tertiary education, reducing the early school leaving (in 1st-8th grades), as well as for lifelong learning (what happens after graduation and when the graduate already entered the labor market, but also when adults need requalification). These three strategies represent ex-ante conditionalities of the European Commission for the absorption of structural funds allocated to the "Education and competences" sector during the period 2014-2020.

The fourth project of advisory services is in the area of enhancing the administrative capacity of the Ministry of Education.

B: How is our country ranked compared to the other European states, in the area of education?

C.A.: Romania has regularly been a participant for several years in an international assessment coordinated by OECD - Program for International Student Assessment. There are many European countries that are participants in this assessment - USA, several countries from Latin America (Mexico, Argentina, Chile and Uruguay), India, China and many in Europe. The program provides a benchmark, which can be used for assessing the education level provided here, in Romania, compared to the Western European countries.

The last two tests were carried out in 2009 and 2012, and the next shall take place in 2015, as this assessment is carried out every three years. The program is aimed at the assessment in the field of mathematics, reading and sciences. It is not a test assessing students in relation to a curriculum, they are assessed in terms of competences, and to what extent the education acquired can be applied to everyday needs. The pupils being assessed are 15 year old. The outcomes show a difference between Romanian pupils and OECD pupils, the first being 50 points under the average of the OECD countries, at Mathematics, which is equivalent to one study year. Thus, we can say that 15 year old pupils from Romanian schools are, in average, one year behind pupils of the same age from OECD.

B: What do you think is the cause of this situation?

C.A.: The Romanian challenges are similar to those of many other countries. One of the topics often discussed with ministers - not only the minister of Education, but also the minister of Finance and the minister of Labor - is the discrepancy between the competencies with which the Romanian pupils exit school and those required on the labor market. In all the countries we work in, when questioning employers we can notice this difference between the competences they would need and those developed by the education system, caused for several reasons. In Romania, four out of ten employers questioned, i.e. 40%, think that the skills with which youngsters exit the education system and enter the labor market represent a constraint for firms. In a similar manner, like in other countries in the world, this fact especially affects companies competing on the global market.

B: How could we reduce this gap?

C.A.: Reducing this gap is the key challenge for your country. Moreover, there are also problems regarding the differences between the best students and the worst performer, in Romania such difference is reaching 100 PISA points that is two years. These are inequities that need to be solved, and the difference is probably related to socioeconomic characteristics, like incomes levels, rural vs urban environment and other similar aspects. Quality is an issue, when comparing Romania against Europe as I mentioned before. Another important issue is related to resources. In Romania, about 3.4% of GDP is invested in education, compared to an average of more than 5% in the EU.

We are aware of the fact that this aspect is a priority for Romania, but our recommendations are not simply higher amounts to be invested in education, but for a wiser increase of such amount, trying to invest in those areas with potential, which can achieve the results that Romanian students really need.

Our advice was always for you to increase the education budget wisely.

Another area where we can see a challenge is the equal opportunities. We notice that there are disparities with regard to school attendance, and to how many years of education students attain.

B: How is education helping developing the economic environment?

C.A.: In general, education and human capital represent, according to research, the key determinant of economic growth and economic development, of a country's competitiveness. Education and improvement of education allow you break the intergenerational transmission of poverty. A valid reality in many countries is that education boosts productivity, earnings and employment conditions, especially for the bottom 40% of the population. For these reasons, education is a priority for Romania, and also for us also.

As regards Romania, in addition to what we have discussed above, there are two more specific issues: one is the ageing population, and the other - emigration. There are estimates that the size of population of working age shall decrease by 2050. In order to support the economic growth and the country's competitiveness, the challenge consists on increasing the productivity of this shrinking and ageing population.

B: How is the labor market evolving?

C.A.: We are living in a dynamic world. Many countries show changes between sectors, from agriculture towards services and other industries, where the activities required by those working in these areas are different from those in agriculture. Another trend we can observe is that of the new technologies. Routine work, which can be replaced by computers and technology, is becoming less demanded, in the entire world, while activities involving complex thinking and expert communication which cannot be replaced by technology are those increasingly required. With these changes, the profile of the required competences is also changing.

Within the World Bank, we made an exercise for the USA, to find out which is the probability for a pupil, who enters first grade now, to have in about 16 years - after 12 years of school and four years of college - a job that exists now or demands the skills required nowadays. The answer is 30%.

We are actually living in a continuous change, and in order to reduce this gap more dynamism is required in the education institutions. This means emphasizing the general activities - writing, reading, numeracy, but also certain personal skills - teamwork, communication, complex thinking, compiling information and less on technical competences suitable for a single type of occupation. How the education institutions are preparing youngsters for a different life than the one we had in the past that is our current preoccupation. We need to prepare people capable of changing occupations, they need competences and knowledge that would allow them to carry out such transition.

B: What educational projects does the World Bank have worldwide?

C.A.: We are working with many countries all over the world, in various regions. In the area of education, we have 132 projects currently under implementation, amounting to 11.6 billion dollars - credits and loans.

On the loans side, we are working with countries like India, China, Pakistan, Mexico, Argentina and, in the region that your country is part of, with Bulgaria, Macedonia, Moldova, Montenegro. Among other things, the Bank is also carrying out studies, analyzing higher education systems and providing advisory services in the education sector. On this segment, we are also working with other countries in the region, like Latvia, Russia, Poland, Bulgaria, Croatia, Serbia, Belarus, Cyprus etc. and we have a large project portfolio in progress.

Romanian government has recently approved a contract for a loan amounting to 200 million Euro from the International Bank for Reconstruction and Development (IBRD) to finance a secondary education project. The project's objective is to contribute to an improved transition from the secondary higher education system to the tertiary education system and to increase the degree of completion of the first year of higher education. Beneficiaries will be all the high schools in the public education system with a low school completion rate or high school final examination passing rate, as well as universities from the public education system. The project will be structured around three components and will be implemented in about seven years, from November 2015 until December 2022.

* Romania - first place in the EU at the International Mathematics Olympiad. In July 2014, the Romanian pupils earned six medals - one gold medal and five silver medals - at the 55th edition of the International Mathematics Olympiad, which took place in Cape Town (South Africa). Following these results, Romania ranked 11th in the world and first in the European Union. All of the six pupils of the Romanian team won medals.