Ndeye Ngom is a first-time mother in Senegal’s Fatick region, 150 kilometers southeast of Dakar, the capital city of Senegal. And like any parent, upon hearing the news that her daughter, 9-month-old Khady Faye, was underweight, Ndeye grew immediately worried. “I panicked when they told me the baby is malnourished,” Ndeye remembers. “This is not a disease we know.”

Ndeye’s concern for her daughter was not unfounded. Childhood stunting, an overarching measure of long-term malnutrition, has life-long consequences: It can reduce cognitive abilities, limit school attainment, decrease adult wages, and make children less likely to escape poverty as adults.

But Ndeye no longer needs to worry. Thanks to routine home visits and careful monitoring from her village’s community worker, Nda Ka, children such as Khady can avoid the lifelong devastating impacts caused by stunting. Responsible for holding the monthly weighing sessions and providing extra support to the mothers of children who are malnourished, Nda identified Khady as underweight and counseled Ndeye closely. Nda made sure Ndeye had access to and knew how to prepare fortified porridge. Soon after Ndeye began supplementing Khady’s breastfeeding with the fortified porridge, Khady started to gain weight. “Nda Ka really helped me because if I were alone, my daughter wouldn’t have gotten better,” Ndeye said.

At the start of the millennium, malnutrition was highly prevalent in Senegal, with stunting affecting as many as 30 percent of children under five years of age. In response, the Government of Senegal — with support from IDA, the World Bank’s fund for the poorest, and other partners — shifted its approach on nutrition to a community-based holistic strategy.

The effort was overseen by the Nutrition Policy Coordination Unit in the Prime Minister’s office, which worked with local governments, public service providers and NGOs to deliver nutrition services to communities and households. These services included health education, breastfeeding promotion, infant and young child feeding counseling, monthly weighing sessions, micronutrient supplementation, conditional cash transfers, targeted food security support and more. Today, the stunting prevalence in Senegal has fallen to 19 percent, making it one of the lowest in Sub-Saharan Africa.

For children like Khady, Senegal’s bold steps and clear prioritization at the highest levels of government to reduce stunting has paved the way for what could be a major shift in the trajectory of their futures and also the future of the country’s economy.

Current global estimates suggest that 25 percent of all children under five are stunted. And while stunting can have devastating consequences for individuals, their families, communities and economies, reductions in stunting could potentially increase overall economic productivity by as much as 4 to 11 percent of GDP per capita in Africa and Asia.

Nutrition interventions are consistently identified as one of the most cost-effective development actions. The recently published Investment Framework for Nutrition showed that scaling up nutrition-specific interventions has been highly impactful in saving the lives of 3.7 million children and preventing stunting in 65 million children, with a $4-$35 return on every dollar invested.

Using a community-based service delivery model, the nutrition program in Senegal was also able to adapt to very local contexts and each community’s specific needs. For example — in Balol Elimanne, a 400-person farming village that was hit hard by a 2013 locust invasion — the program provided conditional cash transfers and chickens to help particularly vulnerable families.

Cheikh Diop, a farmer, and his wife, Arame Diaw, head one of these vulnerable households. After a locust invasion destroyed their crops in just two hours, they struggled to feed their children. “Suddenly, the sky turned red and we heard a loud humming sound. By the time we all ran to our fields, the locusts had eaten everything,” Cheikh said. As part of the program’s holistic approach, the Diop family received chickens through the agriculture department. The chickens provided the family with a much-needed additional food source and extra income.

Around that same time, Arame was pregnant, and the program also provided cash incentives for antenatal visits and for delivering her baby in the hospital. The money she received allowed the couple to buy additional food for the family, medicine, and school supplies. “My prayer for each of my children is that they get good degrees and can take care of us in old age,” Arame said. 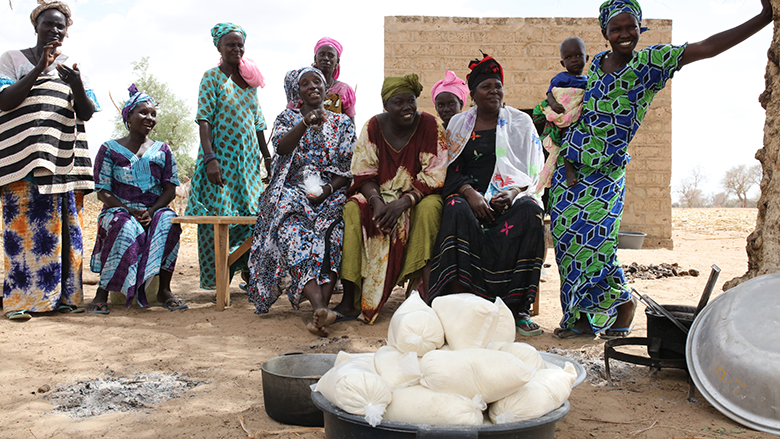 In Ouadiour Serrer, a steering committee manages a cereal bank that provides fortified porridge to mothers whose children have been identified as malnourished. (Photo credit: Dominic Chavez)

In nearby Ouadiour Serrer, a steering committee manages a local cereal bank. Each year after the harvest, community members provide the committee with bags of millet, groundnuts, and black-eyed peas. From those rations, the bank committee prepares the grain to create packages of the nutrition-boosting fortified porridge, which is then distributed to local mothers whose children are identified as malnourished during weighing sessions.

“I have seen a lot of changes . . . the children who went to the weighing session are far smarter than those that didn’t go,” Ndeye said. “My wish is to see some of these children become government ministers . . . or even become president.”