Coastal areas in the Maghreb are essential not only to sustain biodiversity (the Mediterranean basin is among the world’s 25 most important biodiversity hotspots) but also to develop the blue economy to generate wealth, create jobs and sustain livelihoods. The majority of the population in the Maghreb lives by the coast or close to it, and many people depend on the coast for their livelihoods. For example, the tourism sector and connected industries contributed 14.2% of GDP in 2018 in Tunisia, providing jobs to more than two million people, and around 18.6% of GDP and 16.4% of employment in Morocco in 2017. Other sectors, such as fisheries, directly or indirectly also critically depend on the intactness of coastal and marine areas. Jobs in the blue economy, such as fisheries and tourism, are particularly important for low-income households, and losing them would cause many fishers and tourism employees to fall into poverty, comparable to disruptions caused by COVID-19. Losing the foundation for many blue economy livelihoods, namely the beaches, is a slow-run process that has already begun, has already made beaches (half-) disappear, and is expected to accelerate with climate change.

Coastal erosion in the Maghreb: the physical evidence

Coastal erosion is a major threat to the livelihoods of people who depend on the coastal zone. In a recent report, our World Bank team assessed the physical realities – in terms of land areas lost and gained – to changes in the coastal landscape. The team found that beaches in the Maghreb region eroded on average at a rate of 15 centimeters (cm) per year from 1984-2016, more than double the global average (7 cm); a rate only outpaced by South Asian coasts (see figure 1). Within the Maghreb, Tunisia had the highest erosion rates, averaging almost 70 cm a year, followed by Libya’s coasts that receded by 28 cm per year on average. The average sandy shoreline in Morocco retreats by 12 cm a year on the Atlantic side and by 14 cm on the Mediterranean coast, about twice the average globally. With rising sea levels and more frequent extreme weather events, these erosion pressures are set to exacerbate in the future. Without adaptation measures, intensifying coastal erosion, inundation risk and coastal pollution present significant risks for coastal communities and livelihoods.

Figure 1: The Maghreb is the World’s Second-Fastest Coastally Eroding Region 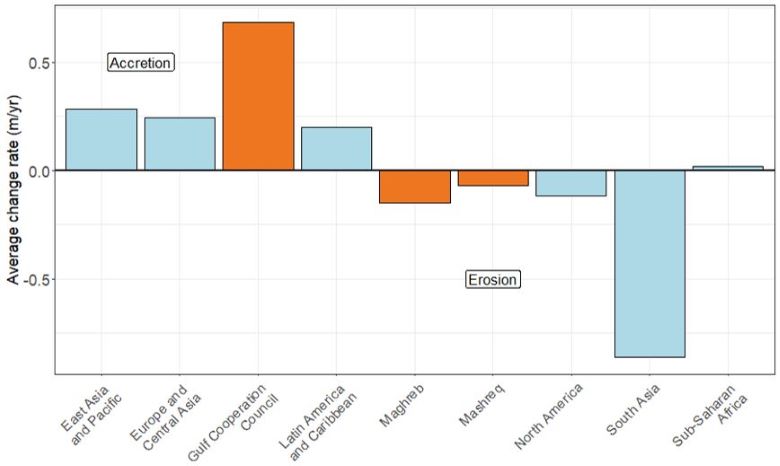 What is behind coastal erosion?

Coasts are constantly changing, with some parts accreting (gaining land), while others are eroding (losing land). However, human activities such as sand mining, development of coastal infrastructure or inland river damming can have significant impacts on these natural patterns on multiple levels, as shown in figure 2. In North Africa, anthropogenic pressures are the main drivers of coastal erosion. 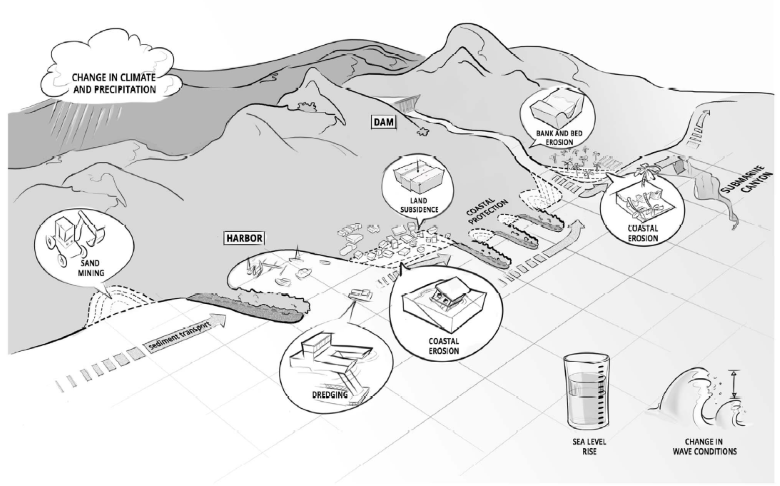 Coastal erosion is not a homogenous process along the coast. Our Bank team partnered with the National Oceanography Centre (NOC) and the European Space Agency (ESA) to get a detailed understanding of coastal erosion. This cooperation resulted in a very fine-gridded dataset allowing for the detection of coastal erosion hotspots. Figure 3 below shows the results for the Moroccan Mediterranean coastline, indicating how some areas have eroded extremely fast, at speeds of a few meters per year, while others have not changed much, and yet others have gained.

Figure 3: Shoreline Changes along the Mediterranean Coast of Morocco 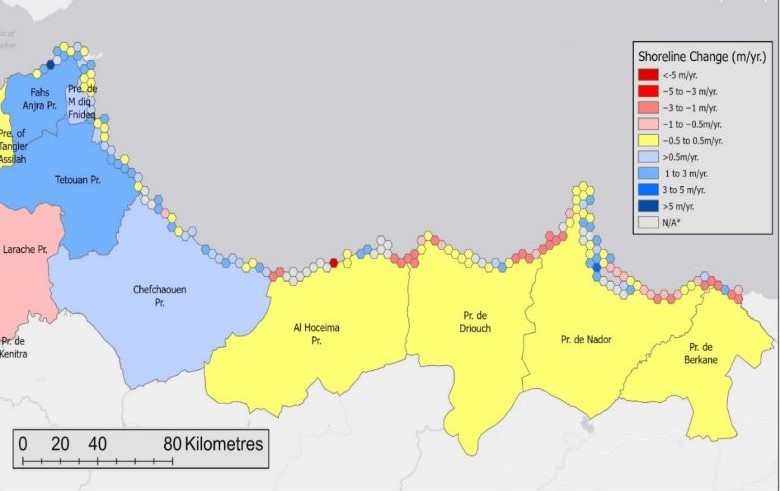 One example of a beach that has lost a large amount of area is Hammamet, south of Tunis, which is depicted in figure 4. In the span of 13 years between 2006 and 2019, the beach lost more than half of its original size. 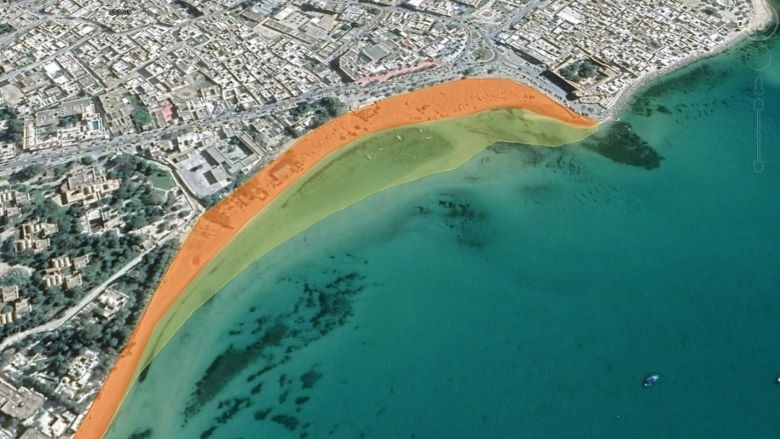 Coastal erosion in the Maghreb: the economic and social evidence

Our Bank team also assessed the economic costs associated with coastal erosion in the Maghreb. The team found that the annual costs of lost land and infrastructure assets are equivalent to about 2.8% of GDP in Tunisia, 0.7% in Libya, 0.4% in Morocco and 0.2% in Algeria. The large range in asset destruction costs is driven by many factors, including erosion rates, degree of urbanization of the coast, and land prizes. These costs, however, are on the lower side as they do not incorporate other values such as foregone revenues from tourism. Diminishing beaches could have major consequences on the blue economy for countries in the region where tourism plays a major role. Results from West African countries suggest that such indirect costs annually amount to up to 45 percent of direct costs.

A large share of the workforce in the blue economy, such as in the fishing and tourism sector, is only informally employed, lacking access to social safety nets and are hence particularly vulnerable to income losses caused by coastal erosion. For example, in Morocco around 700,000 people are employed in fishing and fish processing activities, many of them informally. Informality is less prevalent in the tourism sector but still present. In Tunisia, the informal sector produces between 30 to 40 percent of GDP, with many of the workers, especially young people, employed in the tourism sector. Coastal erosion, slowly but steadily, eats away an important part of their work and hence increases their vulnerability.

As Maghreb countries adopt the paradigm of Green, Resilient, and Inclusive Development (GRID), managing coasts sustainably is critical. Some drivers of coastal erosion, such as ones caused by climate change, are outside of the immediate control of Maghreb countries. Nonetheless, there are steps that can be taken. First and foremost, combatting coastal erosion and managing coastal development requires a holistic view on changes in the coastal landscape and the different stakeholders interested in its further development. This challenge necessitates the implementation of comprehensive Integrated Coastal Zone Management (ICZM) schemes. One such ICZM scheme was launched recently in northern Morocco, the regional coastal management plan in the Rabat-Salé-Kénitra region, with support from the World Bank and the Italian government. Such schemes can also come with fiscal incentives, as for example in France, where the revenues of a tax on coastal construction work is redistributed to local authorities to support land policies that contribute to coastal areas conservation.

There are also concrete engineering measures that can combat coastal erosion as part of ICZM schemes. A focus should be placed on nature-based solutions, which not only increase the resilience of coastal assets, but also simultaneously revitalize important ecosystems. These include dune stabilization through vegetation, seagrass planting, or rehabilitating coral reefs. So-called “soft” measures such as beach nourishment or wind fences for sand accumulation are also viable options. Tunisia has used several soft measures to combat coastal erosion, including the erection of over four kilometers of pinewood fences to stabilize dunes. Banning and effective enforcement of bans on illegal sand mining are important to support efforts for dune stabilization and accumulation. Similarly, removing or retrofitting existing dams to allow for improved sediment transport is effective in reducing coastal erosion further downstream.

Coastal erosion results in substantial costs for the development of the Maghreb’s blue economy. These costs are very likely to increase in the future, exacerbated by sea level rise and more extreme weather events. Going forward, governments in the Maghreb should strengthen their preparedness to combat the adverse effects of coastal erosion. This includes the initiation and further advancement of ICZM schemes as well as a reorientation of protective infrastructure towards nature-based solutions. An upcoming report, entitled “Blue Skies, Blue Seas”, will provide recommendations on how to approach the continuing retreatment of coasts in a broader regional context