The world is facing immense and interconnected challenges: the COVID-19 pandemic, climate change, and nature loss. These crises are forcing a rethink of how we approach and understand development. As policy makers, investors, and development practitioners worldwide consider how to set development on a more green, resilient, and inclusive path going forward, Gross Domestic Product (GDP) remains one of the main tools used to assess the state of the economy. However, GDP does not give the whole picture.

Just as a company measures its value by looking both at its income and balance sheet, countries must complement GDP with a look at its portfolio of assets to better understand the sustainability of national economic growth. GDP alone is insufficient to safeguard prosperity. In fact, GDP growth-focused policies often maximize short-term income at the expense of future income and well-being, for example, by degrading nature for short-term profits.

The Changing Wealth of Nations 2021 is the latest in a series that introduces the concept of wealth as a complementary indicator to GDP. The report tracks the wealth of 146 countries between 1995 and 2018, by measuring the economic value of renewable natural capital (such as forests, cropland, and ocean resources), nonrenewable natural capital (such as minerals and fossil fuels), human capital (earnings over a person’s lifetime), produced capital (such as buildings and infrastructure), and net foreign assets. By looking at all of these assets that underpin national income, wealth accounting provides a means to track the sustainability of economic progress into the future.

The report has made strides in how to measure national wealth since the previous edition in 2018. This includes adding measures for blue natural capital, like marine fisheries and mangroves, as well as increased number of countries covered, making this the most comprehensive wealth accounts available. And for the first time, the report examines the projected impact of future risks such as climate change and the low-carbon transition. 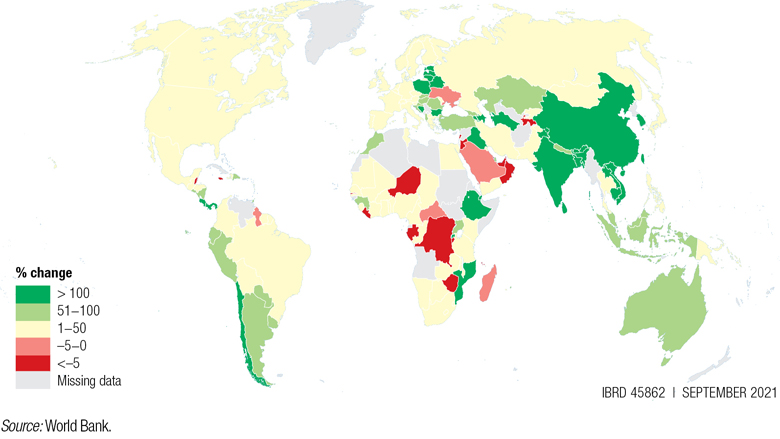 However, a closer look at the wealth accounts paints a more concerning picture. Unfortunately, inequality between countries persists. Between 1995 and 2018, low-income countries’ share of global wealth hardly changed, remaining below 1 percent despite being home to about 8 percent of the world’s population. When looking at wealth per capita, a good indicator of sustainability, trends are also troubling. In 26 countries, wealth per capita actually declined between 1995 and 2018, and almost half of these were in Sub-Saharan Africa.

Although wealth is growing globally, in some countries this may be at the expense of future prosperity. Where wealth in some asset categories is falling despite rising GDP, growth may be unsustainable. Declining wealth per capita breaks a core principle of sustainability: that future generations be left no worse off than current generations. 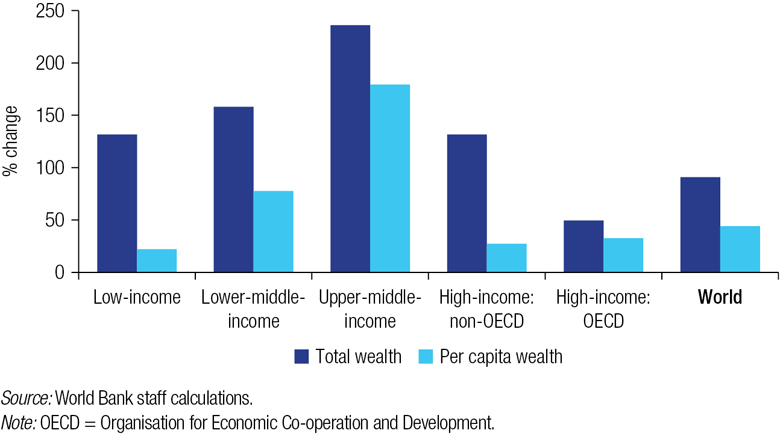 Renewable natural capital, such as forests, cropland, and ocean resources, forms a very large share of wealth for low-income countries. This type of capital provides critical ecosystem services that underpin livelihoods and economies. This means that it is of even greater importance for sustainable socioeconomic development and poverty reduction to manage this wealth carefully and not deplete natural assets for a short-term income boost.

Although in terms of value, wealth in renewable natural capital is growing, its share of total wealth is decreasing and being further threatened by climate change. Among low- and middle-income countries forest wealth per capita has declined 8 percent from 1995 to 2018 largely due to degradation and agricultural conversion. Globally, the value of fish stocks collapsed by 83 percent due to poor management and overfishing. However, mangrove flood protection services have grown more than 2.5 times in value to over $547 billion. The value of protected areas has also rapidly increased. Investments in these types of natural capital could help countries increase their resilience and build future wealth.

Although renewable energy is not yet valued in this edition of the report, water, wind, and solar energy represent a potentially large wealth of nations. Better climate and energy policies, for example pricing carbon emissions, could quickly unlock significant value of renewable energy assets. 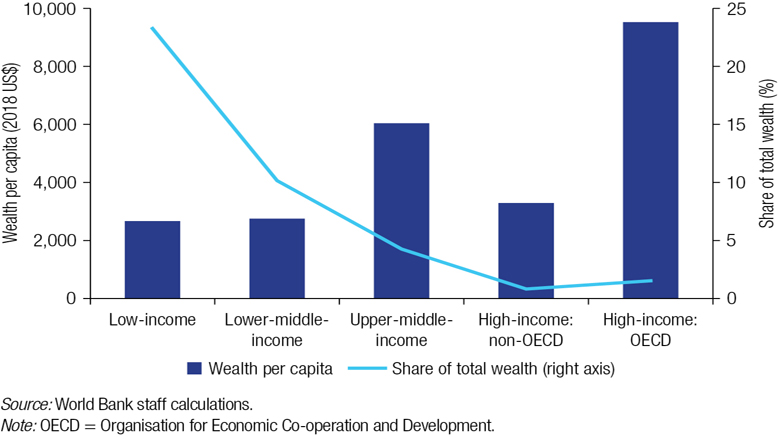 Renewable Natural Capital: Wealth per Capita Value in 2018 versus Share of Total Wealth

Countries with a disproportionate share of wealth coming from individual assets, particularly subsoil resources such as oil, gas, and minerals, have faced volatile and even declining wealth, mainly due to falling commodity prices. Historically, environmentally harmful forms of capital, like carbon-emitting fossil fuels, are often overvalued, creating market incentives to over-invest in these assets. The low-carbon transition poses economic risks to countries that are overly dependent on nonrenewable capital, particularly fossil fuels, and increases the importance of asset diversification. The report finds that the low-carbon transition could lower the global value of fossil fuel assets by US$4.4 trillion to US$6.2 trillion (by 13 - 18 percent) between 2018 and 2050. Countries can manage this risk by reinvesting wealth from fossil fuels into the other types of wealth – for example, human capital - away from fossil fuel value chains. 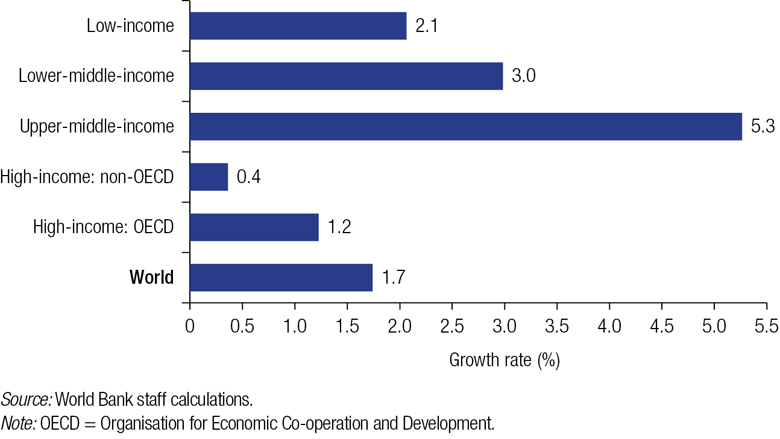 Pollution of outdoor and indoor air is also constraining the potential of human capital. If there were no premature deaths from air pollution, global human capital would have been about 0.3 percent higher in 2018.

Although the long-term impacts of the COVID-19 pandemic remain to be seen, low-income countries are expected to experience the most severe impacts, with a loss of 14 percent of their total human capital compared to 2018. As a share of human capital, Sub-Saharan Africa and South Asia are expected to suffer the greatest setbacks.

We hope that the data in this report will be used by policy makers and others to improve measures of economic progress and help drive policies that improve lives for generations. The report makes several recommendations for policy makers to diversify and rebalance their national portfolios to be more resilient and sustainable.

Economic development, flourishing populations, and nature can all complement each other—indeed this is essential if people are to thrive on this planet. The Changing Wealth of Nations provides a fresh mindset, data and analysis to help countries navigate this challenge and to create the right policy incentives to build comprehensive wealth. Doing so will help to manage climate and environmental risks and ensure that we enjoy our current well-being while building a stronger foundation for the generations who come after us.