A Protective Eye on Bogotá 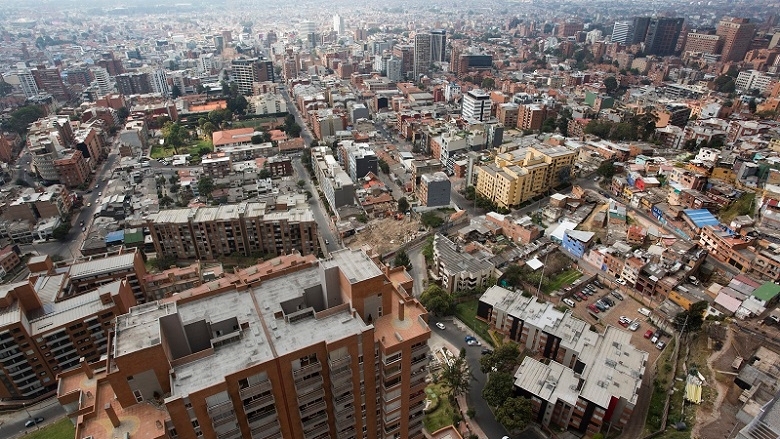 An aerial view of Bogotá

Using artificial intelligence to analyze images collected through terrestrial and aerial mapping, the Capital District of Bogotá, Colombia, is working to identify homes and neighborhoods that need to be improved. The goal is to have families living in better, greener, safer homes before the next disaster strikes.

This effort, supported by the World Bank’s Global Program for Resilient Housing (GPRH), uses a Trimble MX7 vehicle-mounted mobile-mapping system to capture street-level imagery across neighborhoods and combine it with aerial imagery collected by drones.[1] Bogota then uses machine learning algorithms to identify buildings and urban areas that could benefit from upgrading and an inspection by an engineer.

As Nadya Rangel, Secretary of Habitat of Bogota, points out: “This technology will help the city plan and implement future housing and urban upgrading investments in the most vulnerable areas.”

The technology is making vulnerable areas more visible to decision-makers who determine public and private investment in housing and urban infrastructure. “Just as technology can help to detect cancer and provide treatment that we did not think was possible, governments can use technology to triage the homes and neighborhoods that could benefit from immediate upgrading interventions, said Luis Triveño, senior urban development specialist and lead of GPRH.

The idea of imaging neighborhoods to locate homes that are more vulnerable to earthquakes was sparked by the problem of soft-story buildings, said Sarah Elizabeth Antos, a data scientist and co-lead of GPRH.

A "soft story" is a structure in which one or more floors have windows, wide doors, and/or large unobstructed commercial spaces, or other openings where a shear wall would normally be required for stability against earthquakes. History shows that soft-story[2] structures are prone to collapse during earthquakes and that seismic retrofitting is cost-effective.

The risk of soft-story buildings was made evident in Mexico on Sept. 19, 2017, when a 7.1 magnitude earthquake caused more than 40 buildings to collapse, including the Enrique Rébsamen school, where 19 children and seven adults perished.

The World Bank GPRH team started to wonder: Could they use machine learning—computer algorithms that learn and adapt—to mimic an expert’s eye? Could they detect not just school buildings, but also types of homes that might be vulnerable to seismic activity, so that engineers could be sent to conduct further assessments and governments can help retrofit them?

Now in its third phase of data collection, the Bogotá project is focusing on up to 12 priority areas of the city comprising roughly 20 square kilometers.

The method generates a residential inventory of neighborhoods, or GIS layers, that shows the government what might need intervention or upgrading, Antos said. “With this technology, governments can speed up the process of capturing data of the housing units in their districts so they can focus more on optimizing the use of scarce engineering resources and addressing the needs of vulnerable families.”

While mobile mapping and GIS technology are often deployed to create exposure databases or in response to earthquakes, floods or other natural disasters, they also make powerful tools for planning investments to mitigate risk before disasters strike.

“This type of work also creates and preserves the memory of how a place looked before a disaster or something bad happened,” Triveño said. Even when a natural disaster destroys an area, it helps to have the visual record. “That’s why we make that imagery available, so people can see it’s preserved, and it’s shared.”

The World Bank is always testing new mapping and GIS technology, which continues to grow more accessible, with costs decreasing and ease-of-use increasing with better cameras and software.

“We have managed to bring it to a cost per unit that is very low, while keeping these algorithms open-source and trying to maximize the reach of these tools,” Triveño said. “I think in that sense, it’s very unique.”

“Looking at the big picture, the solution to vulnerable housing should be informed by technology; led by policies; and scaled up with private sector participation,” Triveño said.

[1] Personal data is not collected, and other measures, such as automatic face-blurring, are taken to protect privacy.