Climate change in Sudan—If you can’t beat it, adapt to it 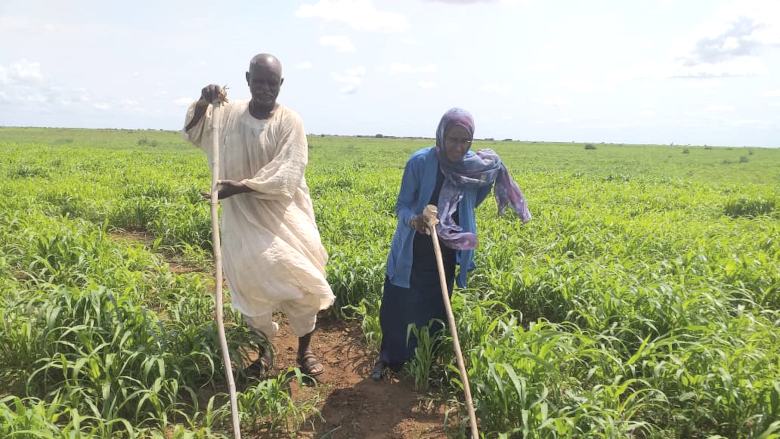 In the rangelands of Gezira State, communities engage in the broadcasting of seeds, a method of scattering seeds mechanically or by hand over large areas, to enhance land productivity, as well as increase the successful yield of sorghum.

KHARTOUM, August 9, 2021— In the arid and semi-arid areas of the White Nile, Gezira, and Kassala states, and as many other areas with similar climatic conditions in Sudan, communities including farmers, pastoralists, and nomads have prolonged conflicts over limited natural resources including agriculture fields, rangelands, and water resources.

With the implementation of the Sudan Sustainable Natural Resources Management Project (SSNRMP), communities built on their local experiences to address existing climate variability and other livelihood and development stresses, and at the same time benefited from the knowledge and technical expertise that the project delivered at the community and local institutions level.

Ali Hassan, a 46-year-old farmer from Wad Musa village in Gaziera State, has witnessed consecutive years of drought brought on by the harsh changes in climate for decades. With poor farming methods, Hassan was often left with low crop yields.

“At the beginning I was very hesitant to use the new seeds and farming techniques introduced by the project but after I planted them and they yielded better crops in terms of quality and quantity, I’m very happy with the result,” Hassan said. “I also learned new agricultural practices supplemented with knowledge on how to conserve my land and the environment at large.”

An independent assessment study of the project conducted in November 2020 revealed that 75.5% of respondents in Gezira State, and 100% of the respondents in White Nile State, mentioned that these conflicts over natural resources which led to injuries, deaths, and ethnic conflicts are now part of the past. As these frequent conflicts have been effectively addressed through the project’s mapping and demarcation of paths between farmers’ lands and pastoralists’ range areas, improvement of crops productivity, and construction and rehabilitation of water resources.

The SSNRMP, implemented in 2014, aims to adopt sustainable land and water management practices while increasing communities’ resilience and capacity to cope with climate impacts in three phases. The project targets about 110,000 people in Gezira, Kassala, White Nile, Northern State, River Nile, North Kordofan, Gedarif and Khartoum states through 2023. Implemented by the Sudan Ministry of Agriculture and Forestry with technical support from the World Bank, the project’s execution was possible with $19 million from the Global Environment Facility.

The project builds on an innovative incentive-driven model that assumes that communities tend to sustainably manage their natural resources if they can derive direct economic benefits from them. Using this approach, more than 47,000 beneficiaries (of which more than 34% are female) received 15 tons of seeds varieties, including watermelon, millet, sesame, ground nuts and hibiscus, and prepared 2050 ha of land for 2,720 farmers of which 325 were women. As a result, 74.4%, 83.5% and 47.3% of beneficiaries in White Nile, Gezira and Kassala states, respectively, were able to grow enough food to feed their families.

Hanan Ahmed is one such beneficiary. The 40-year-old housewife who lives with her family in Taybeen village, Gezira state, the availability of close water source saved her family time and energy, and allowed her to create a home garden, not only securing food for herself and her family, but also creating a source of income generation.

“My 10-year-old daughter who used to walk for long distance to bring water is now having more time to study and achieving better marks at school,” she said.

To increase vegetation coverage, the project rehabilitated  20,687.5 ha of land during Phase 1, more than the original target of 17,400 ha. The Wildlife Breeding Center in Gezira State’s Um Barona forest was established through the project, designed to contribute to wildlife conservation, tourism, and scientific research. The center complements existing interventions to support sustainable utilization of natural resources, in particular, improving the adaptability of wildlife species to climate change and other stresses.

In White Nile State, the project also rehabilitated Um-Jur natural reserve with various ecosystem services, which led to recommend the reserve as a Ramsar site; an international designation under the Ramsar Convention on Wetlands.

“Biodiversity conservation and sustainability of natural resources cannot be achieved, unless viewed in an ‘integrated’ manner, and by adopting collaborative approach that involves all relevant parties to provide an enabling environment for managing natural resources effectively,” said Milena Petrova Stefanova, World Bank Country Manager for Sudan.

Originated from the concept of the necessity to ensure sustainability by harnessing the indigenous knowledge of communities for finding local solutions for local problems, the project envisaged that management of natural resources will be more sustainable if it is rooted in the existing coping strategies of communities. Consequently, the adaptation techniques adopted by the project attempted to build on tested local practices a reality that formed the starting point of the project’s building blocks to fortify community resilience.

This included the creation of space for active community participation and the transfer of power from central government to local institutions. A leading example with this is the establishment of 83 demonstration farms across the targeted areas that have been mainly used as learning fields for helping farmers who have been practicing traditional farming to develop new skills and adopt tested agricultural knowhow.

Since July 2020, Phase III has extended the project implementation to the new two states of Khartoum and Gedarif. The project provided a number of success stories for replication and scaling up in other states of Sudan and externally with other countries within the Great Green Wall Initiative.