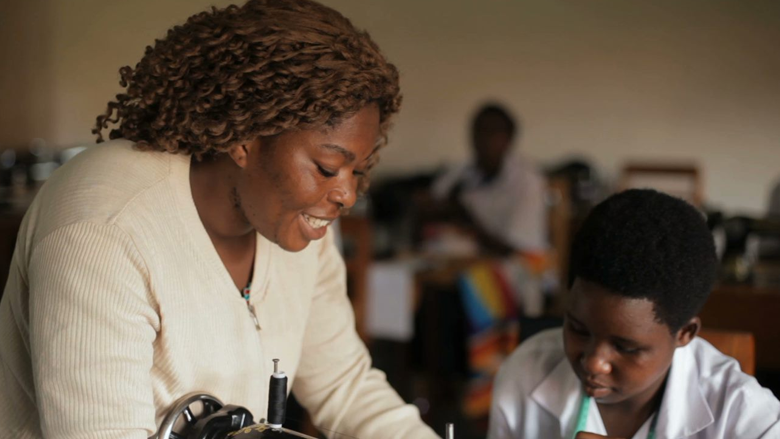 In the aftermath of the Genocide against the Tutsi, the new Government of Rwanda established measures to address the impact of war and move toward national reconciliation. The 1994 genocide took the lives of nearly one million people and left the country devastated. Many from the former government army and militia fled to what is today the Democratic Republic of Congo where they spent decades struggling to survive.

Ex-combatants go through a process of demobilization that includes medical support, psychosocial screening, and counseling. The RDRC also provides training and classes to support the former soldiers as they reintegrate into Rwandan society. The most vulnerable ex-combatants, along with all female and children former combatants, are eligible to receive two years of formal education, vocational training, or apprenticeship training.

“After completing this course, I am confident that this will help me move out of the poverty cycle,” said Marie Tuyizere, a young tailoring student at the training center. “With the skills that I have acquired here, I will be able to venture into the job world and gain an income to support me and my family.”

Nearly 300 former child combatants have come through the program. Often forced to join armed groups and begin fighting as young as 9 years old, upon their return to Rwanda, they spend at least a year at Muhoza Children Rehabilitation Center. Here trained staff attempt to fill in the gaps of the childhood they missed. At the end of their stay, former child soldiers are either reunited with their families or placed within foster families.

Cooperatives have also been a great vehicle for social economic reintegration, as ex-combatants work alongside community members with the common goal of growing a business. The Abahuza Cooperative, a mototaxi business in the capital, Kigali, is an excellent example of this successful model. The cooperative began in 2009 with 10 ex-combatants and a few motorcycles. Today it is a thriving enterprise, employing more than 450 drivers — almost 100 of whom are ex-combatants.

“I joined Abahuza Cooperative and I was well welcomed,” said Martin Muhire, a former solider. “I was given a motorbike and things have been going well ever since. We receive constant trainings from the Demobilization Commission and that helps significantly. I now own a home, all through this job.”

The successful demobilization, economic reintegration, and assimilation of former soldiers has been a crucial component of Rwanda’s long-term development strategy. With IDA’s support, the RDRC has helped to restore social norms and maintain stability for this recovering country.