New Beginnings for Ex-Combatants in Rwanda 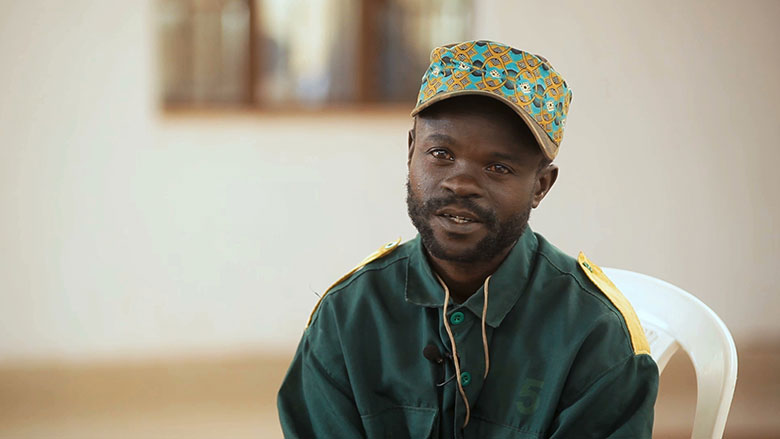 RUHENGERI, January 28, 2019 – It was a cool, foggy morning in Rwanda’s northern province. About 30 men were gathered inside a classroom at the Mutobo Demobilization Center while birds chirped loudly outside a large open window. The men were all former combatants who had recently voluntarily returned to Rwanda from the neighboring Democratic Republic of Congo (DRC) and were seeking to rejoin civilian life. They took attentive notes and listened keenly as their instructor went over a history lesson.

In 1994, Rwanda faced the genocide against the Tutsi, which claimed the lives of more than 1,000,000 Tutsi and moderate Hutu in just 100 days. The country was left devastated. After the Rwanda Patriotic Front, led by now-President Paul Kagame, seized power, the former government army and militia fled to what is today the DRC where many combatants spent decades struggling to survive.

In the aftermath of the genocide, the Rwandan government established measures to address the impact of war and move toward national reconciliation. A key component was the disarmament, demobilization and repatriation of armed groups including the former government army and the new government’s military.

“Rwanda has made extraordinary progress in recent years,” said Yasser El Gammal, World Bank Country Manager for Rwanda. “Consolidating peace and stability in the region is critical for the country to continue realizing strong economic growth and substantial improvements in living standards for all Rwandans.”

Having spent many years outside of Rwanda, former members of armed groups are sometimes scared to repatriate for fear of prosecution for possible crimes committed during the genocide. Others, who joined armed forces while in DRC are held hostage by their commanders, who maintain tight control over mindset and movements of personnel and their families.

The first step in the process of demobilization and reintegration consists of convincing members of armed groups that it is safe for them to disarm and return home.

Elie Mutarambirwa, a commander, returned to Rwanda in 2010. He now works with the RDRC and often speaks to combatants abroad to encourage them to return home.

“We often call them on the telephone,” he said. “We try to give them details on what is happening here in Rwanda. Having lived with most of them they know us, sometimes if we send them messages, they easily understand, and they trust us.”

At the Mutobo Demobilization Center, about two hours from the capital, Kigali, former combatants start their transition to civilian life.

“At Mutobo Demobilization Center, we give them services including medical, shelter, catering, civic education, hands-on skill training, as well as training in basic entrepreneurship,” explained Francis Musoni, Secretary General of the RDRC.

Families of former combatants are also demobilized through a similar, condensed orientation program to facilitate their reintegration in the community.

Several child combatants, between 11-17 years old, are among those who returned to Rwanda. These children were born and raised outside of Rwanda, either within civilian settlements or associated with armed groups. When the boys reach a certain age – usually between 9 and 12 years old - they are often forced into becoming part of armed groups.

By December 2017, 293 former child combatants have come through the program, spending at least a year at Muhoza Children Rehabilitation Center, where trained staff attempt to fill in the gaps of the childhood they missed. At the end of their stay, former child soldiers are either reunited with their families or placed within foster families.

A 2012 survey conducted at Mutobo Demobilization Center revealed the prevalence of Post-Traumatic Stress Disorder (PTSD) and other mental health issues among combatants. As many as one-third of all respondents scored high in indicators for severe mental health problems.

For this reason, the RDRC, with the support of development partners, established a methodology where all ex-combatants and their dependents are screened for mental health challenges. If necessary, some are immediately treated upon their arrival to the Center.

“An important aspect of this activity is that mental health services were set up at the very beginning of the process, in the demobilization center,” said Natacha Lemasle, Team Leader of the Second Emergency Demobilization and Reintegration Project (SEDRP). “That way, people suffering from the most acute challenges could be diagnosed and treated as early as possible.”

By the time SEDRP closed in 2017, all adult ex-combatants reported they had a mental health screening during their stay at Mutobo Center. As a result of the screenings, more than 3,500 ex-combatants were referred to specialized institutions for psychotherapy or psychiatric treatment.

After completing the orientation programs at Mutobo and Muhoza, former combatants must overcome their own fears and the communities’ mistrust in their bid to rejoin civilian life. Their social reintegration is facilitated by local community events, psychosocial counseling and treatment, HIV/AIDS voluntary testing and counseling. The most vulnerable ex-combatants along with all female and child former combatants are offered additional support in the form of access to formal education for two years, vocational training or apprenticeship training.

Jean-Felix Hategekimana returned to Rwanda after spending 23 years in the forests of DRC. He has no formal education and is hopeful that the six-months training in welding and fabrication that he chose as his reintegration package will help him quickly integrate the job market. “I have so many ideas in terms of what I will do when I leave here,” Hategekimana explains, “both in terms of looking for employment but also creating my own employment so I can be able to support myself and my family.”

Many former combatants also opt to join cooperatives, where they work alongside regular community members in fields such as agriculture, construction, motorcycle taxi driving and tailoring.

Celine Mukabagema was part of the former government army.  She returned to civilian life in 2003 but was left with a permanent physical disability that limited her mobility. She was one of the beneficiaries of a custom-built house where she now lives with her family. She also took part in a tailoring course and received a sewing machine that she uses to supplement the monthly allocation she receives from the government. As a result, she was able to support her family and send her two children to school.

Mukabagema also remarks that although she served in the former government’s army, she was not discriminated against and received the full range of support upon her return to civilian life. “I don’t see any differences even if we served the former army, we are all treated like everyone else during the reintegration process,” she said. “There are no differences and I think that’s a good thing.”

The demobilization and reintegration program went beyond achieving its targets and informed the broader development objectives of Rwanda. As such, in 2007, the categorization established by the RDRC to assess the degree of disability in ex-combatants was turned into a national law and mainstreamed to the entire population of Rwanda. The program’s Medical Rehabilitation Unit was also requested by the government to train doctors around the country.

The support of the World Bank for this project lasted for more than a decade and came to an end with the closure of the Second Emergency Demobilization and Reintegration Project in 2017. Building on the lessons learned and the innovative approaches piloted, the Government of Rwanda continues to run the program and offer demobilization and reintegration support to the remaining members of armed groups and their dependents.