Today, they are working together and chatting idly about the hot weather as they open each canal channel. The days of dispute over water distribution are behind them. “The biggest problem in the community used to be water distribution,” says Ramazan Ibrahimkhil, 40, head of the Pazhak village shura, the local community council.

“Disputes came about because the farms in the higher areas naturally received the most water, while lower landowners complained their land was not getting enough water,” says Ramazan. “I had to come here every day to resolve these disputes, which wasted a lot of time and energy of everyone involved.”

The water is distributed fairly without any problems now, says Ramazan. This and other irrigation challenges have been resolved thanks to the rehabilitation of the 8-km long Pazhak canal under the On-Farm Water Management Project (OFWMP). The rehabilitation of both canals took a year and was completed in July 2018 at a total cost of 14.3 million afghanis (about $198,770)*.

“People don’t have any disputes over the irrigation water anymore and everyone feels it is fairly distributed,” says farmer Hazrat Mohammad, 52, who is deputy head of the Pazhak shura.

Hazrat lists the benefits that farmers will enjoy from more reliable irrigation: “Before, people planted only wheat because it can grow without much water, but now in Pazhak, we can plant corn, potatoes, and beans. Water wastage has decreased by 25 percent. Another villager’s yield increased by just over 100 percent because of the canal. The average income will almost double for farmers.”

"The canal is very well-built, and the water comes quickly, so I save time. With my extra time, I intend to farm more land…Farming is now much easier."
Hazrat Mohammad,
farmer, Pazhak village, Paghman district, Kabul Province 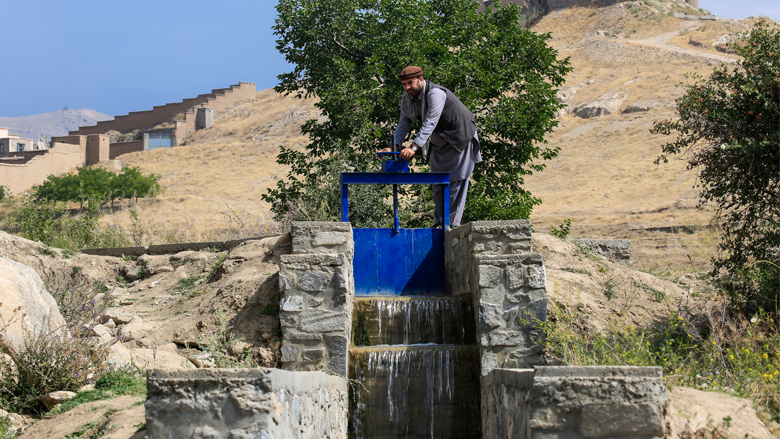 A farmer in Paghman district of Kabul province managing water flow into the newly rehabilitated canal. The canal has helped farmers to reduce water wastage and ensure timely and equal water access to all farmlands in the area.

Naser Waziri, 28, OFWMP manager for Kabul Province, points out that the project has an important impact on farmers’ lives by ensuring regular irrigation, which is already improving crop yield and diversity. “The farmers can dedicate morThe Pazhak and Qara Qhochi canal projects are part of 39 irrigation schemes selected for rehabilitation in Kabul Province under OFWMP. The rehabilitation will benefit over 39,000 people in the province.

OFWMP works to improve agricultural productivity in project areas by enhancing the efficiency of water use. It is implemented by the Ministry of Agriculture, Irrigation and Livestock, and is supported by the Afghanistan Reconstruction Trust Fund (ARTF), managed by the World Bank on behalf of 34 donors.

More Efficient Use of Time 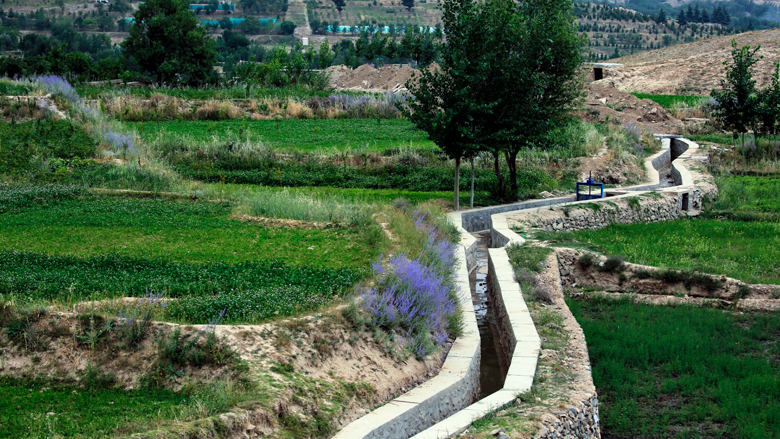 As a result of improved irrigation conditions, farmers in Pazhak and Qara Qhochi villages are able to use their time more efficiently and effectively. “Before I was spending lots of time taking water to my crops and maintaining the [old] canal with the other farmers,” says Hazrat. “Now the canal is very well built, and the water comes quickly, so I save time. With my extra time, I intend to farm more land, but I am enjoying having a rest now and being with my family. Farming is now much easier.”

The new irrigation canals do not require the same amount of maintenance as the old canals. “Cleaning out the old canals used to take 100 men and 8–15 days to complete,” Hazrat says. “But now it just takes a few people and a day.”

Alefuddin Mohammadi, 55, another farmer from Pazhak village, is grateful for the change in his quality of life. “A lot of time had to be spent repairing the holes and cleaning out the old canal,” he says. “Sometimes we even had to work throughout the night to finish our daily tasks.”

Mohammad Azim, 67, a farmer from Qara Qhochi village, also sees the tangible benefits of the rehabilitated irrigation canals, which have decreased farmers’ wait time and increased available irrigation water. “Normally, we had to wait 8 or 9 hours for the water to reach our land. Now, if all goes well, the water gets to our land in less than 1 hour or in 30 minutes,” says Mohammad. “Previously we could only irrigate five farms, but the new canal facilities are much better, we can irrigate 10 farms! The water wastage is much less, so we can do so much more.”