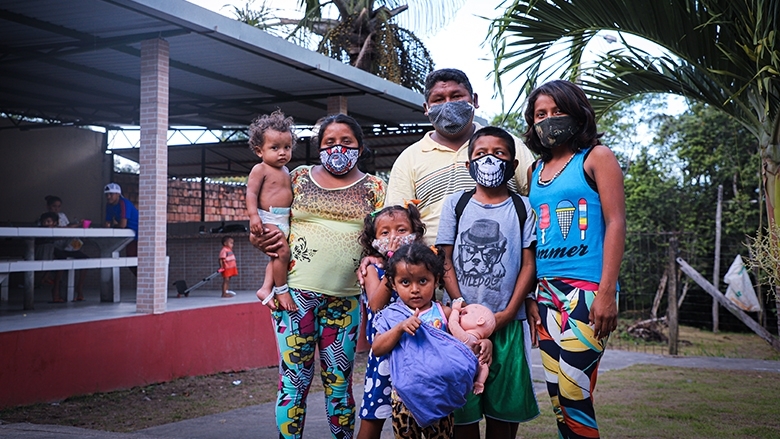 A Venezuelan family in Brazil.

An audio-visual technician for a Venezuelan local television company, Carolina* fled to Brazil with her husband and daughter looking for food, work and education. Ever since she arrived in the country, she has been dedicating herself to taking Portuguese lessons, to making and selling handcrafts, such as dolls, to earn a living.

She is the perfect example of what displaced Venezuelans endure to adapt living in other countries.

Since 2015, around 5,6 million Venezuelans have left behind their homes due to the worsening economic and social crisis in the country. From this total, an estimated 260,000 Venezuelans are currently living in Brazil due to the social, political and economic crisis in their country.

A new study from the World Bank and the UN Refugee Agency (UNHCR) examined this population’s access to education, social protection and the labor market in Brazil. The results show a shocking reality: though as educated as their Brazilian counterparts, Venezuelan adults are 64% less likely to be working in a formal job and children are 53% less likely to be in school.

“We analyzed various administrative and census data from 2017 to 2020 to explore whether Venezuelan refugees and migrants face differential access to education, the formal labor market, and social protection programs. Our goal is to help policymakers and development and humanitarian agencies to improve the design of existing programs to provide greater economic and social inclusion for Venezuelans in their host community,” says Pablo Acosta, the leader of the program at the World Bank who co-authored the report Integration of Venezuelan Refugees and Migrants in Brazil along with Social Protection Specialist Rovane Battaglin Schwengber, WB Young Fellow Mrittika Shamsuddin and UNHCR economists Jedediah Fix and Nikolas Pirani.

The Venezuelan displaced population in Brazil is equivalent to 18% of the total share of the country’s 1.3 million refugees and migrant’s population. Apart from the 46,923 Venezuelans recognized as refugees, there are 96,556 asylum seekers, according to most recent data from CONARE and the Federal Police. Adding up those two numbers, there are 156,300 refugees and asylum seekers from Venezuela, while 145,462 have a residency permit.

Brazil provides universal access to education, health care and social protection irrespective of legal status. However, many Venezuelan refugees and migrants still face barriers to enrol into the public education system, social protection programs and the formal labor markets. According to the report, only 10 percent of the Venezuelan working age population in Brazil manage to access the formal labor market.

“Integration in a foreign country is a long-term process that requires a holistic and multisectoral approach in order to be effective, especially when we are talking about refugees”, highlights UNHCR’s economist and co-author of the report Nikolas Pirani.  “That is why UNHCR bridges these people’s talents and capacities with demands from the private sector, ensuring there is a win-win situation for both refugees and host communities”, he adds.

Naturally, the pandemic has also caused its share of dramatic impact on the already challenging livelihoods scenario of refugees and migrants. The analysis of 2021 data infers that the ones out of labor market are able to get Bolsa Família assistance as a way of surviving while establishing their lives in Brazil. However, the study show that Venezuelans are 30% less likely to be registered in the program compared to their Brazilian counterparts. “Out of those receiving Bolsa Familia, 42% have high school education and 15% have college degrees, compared to 19% of Brazilians having high school education and 1% having college degrees”, reveals Rovane Schwengber.

As for Education, 42% of Venezuelan children are enrolled in school. But even when they attend it, they experience grade downgrading and capacity constraints—making it harder to attain productive human capital and make future generations self-reliant. “They are more likely to attend overcrowded schools than their host community counterparts and more likely to do inferior jobs characterized by temporality, lower wages and higher hours worked,” says Schwengber.

"In Venezuela I was not rich, but I had a good job, I had a house, everything"
Ismênia Elena Beria
Venezuelan nurse currently living in Brazil

Main gateway for Venezuelans into Brazil, the state of Roraima experience relevant economy growth during the period of intensification of the Venezuelan flow, from 2016 to 2017, according to the study "The economy of Roraima and the flow Venezuelan: evidence and subsidies for public policies", carried out by UNHCR and Fundação Getúlio Vargas (FGV). “Roraima had a significant growth in the production of agricultural goods, including Brazil nuts and some livestock items, a sign that integration is as good for migrant as for the host country. The influx of Venezuelan refugees and migrants into Brazil is both a humanitarian crisis and development challenge but it’s also an excellent opportunity of social and economic development,” attest Pirani.

To both reduce infrastructural impact in Roraima, and also considering greater opportunities of social and economic absorption throughout the country, one of the pillars of the Federal Emergency Response, Operation Welcome (Operação Acolhida), is the voluntary relocation of Venezuelans to other Brazilian cities.

“In March, the program completed three years and reached the 50,000 beneficiaries mark. Despite COVID-19, relocations have not stopped over the last year. Since the beginning of the pandemic, more than 1,000 Venezuelans have been safely relocated each month. Overall, 675 municipalities have received refugees and migrants increasing the integration opportunities throughout the country” tells Pirani.

One of these beneficiaries is Ismenia Elena Beria, 48 year-old nurse who is currently living in the capital, Brasilia. She came to Brazil in early 2018 seeking treatment to her thyroid cancer, leaving her husband, children and nursing career behind. After living at the temporary shelter for nearly one year and a half in Roraima, her treatment was concluded with success – as well as the opportunity to be relocated.

"In Venezuela I was not rich, but I had a good job, I had a house, everything," she says. Now, she works at a franchise of a fast-food chain in the Federal District. Away from her family ever since she came, she now waits for the border opening to bring them together in Brazil.

As an effort to help improve integration, the team presented the main findings of the report in a meeting with the Chief of Staff of Brazil’s Federal Government, that coordinates government initiatives regarding refugees and migrants, and representatives from all the organizations and entities involved in the program.  “We are preparing now a new study to analyze the integration program and identify which are the main obstacles preventing this population to enter the Brazilian work force. We hope that our recommendations can help Venezuelans find a home in Brazil,” says Acosta.

The report is part of the program "Building the Evidence on Forced Displacement: A Multi-Stakeholder Partnership'', funded by UK aid from the United Kingdom's Foreign, Commonwealth, and Development Office (FCDO). It is managed by the World Bank Group (WBG) and was established in partnership with the United Nations High Commissioner for Refugees (UNHCR).