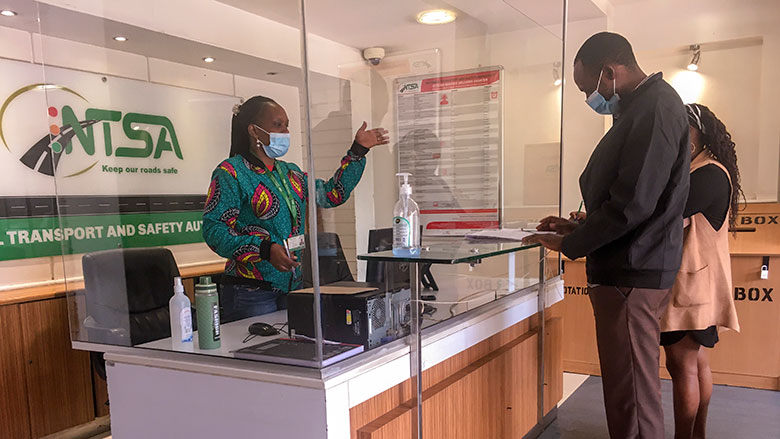 NAIROBI, May 12, 2021— Before 2014, Kenya’s aspiring drivers had to visit several government offices to be licensed to drive. Motor vehicle inspection and driving tests were under the police, while driving licenses were issued and renewed by the Road Transport department of the Kenya Revenue Authority. For the annual licensing of public transport buses and cargo trucks? The Transport Licensing Board.

Fragmented services and manual procedures created loopholes and opportunities for cartels that processed fake licenses and motor vehicle logbooks, contributing to a thriving underground economy that exposed banks and insurance firms to potential fraud and losses.

That was before the Kenyan government established the semi-autonomous National Transport and Safety Authority (NTSA) to harmonize the operations of key road transport departments and manage road safety. To manage essential transport services, the NTSA launched the Transport Integrated Management System (TIMS) electronic data platform in 2016.

“TIMS has made our work easier,” said Richard Kanoru, the Secretary General of the Matatu Transport Vehicles Association. “At a click of a button and within five minutes, an operator can apply for all the necessary licenses to operate a Matatu. Our business costs have come down significantly because we don’t need intermediaries to get services from NTSA.” “Matatu” refers to vans and minibuses that are the most common means of passenger transport across all regions of Kenya.

The streamlined NTSA system is secure and efficient, assuring its users of the integrity of its processes and outputs. By eliminating human interventions, services which used to take weeks or even months is now instant, and documents are generated in a matter of minutes or in a few days at most. Processing of vehicle logbooks and number plates used to take as long as six months but is now done in just three days.

“The World Bank is a major investor in Kenya’s transport sector,” said Keith Hansen, World Bank Country Director for Kenya. “Our technical and financial support to the Kenya government has improved the efficiency of transport systems, facilitated regional trade and eased the cost of doing business in East Africa.”

The TIMS platform was established with funding from the World Bank under the Eastern Africa Regional Transport, Trade and Development Facilitation Project (EARTTDFP)—a $500 million credit approved in June 2015 to facilitate transport and trade between Kenya and its partners in the Eastern Africa region.

“Our resolve from the start was to provide a solution to the cumbersome, manual document slavery, costly and time-consuming processes that frustrated requesters for public transport services,” said George Njao, NTSA’s Director-General. “TIMS has revolutionized these processes by empowering Kenyans digitally in creating a dynamic platform for processing the needs of all transport sector stakeholders.”

TIMS is a sophisticated, yet easy to access digital platform that incorporates motor vehicle registration and transfers, licensing, and inspection in a secure public access online portal. The system provides a cashless, secure, and transparent payment system directly linked to mobile money and internet banking platforms that are now widely used for payment across Kenya. It has an inbuilt short message service (SMS) that updates users on the status of their applications.

Moreover, a secure database that is linked to other government institutions, including Kenya Revenue Authority and the National Registration Bureau, enables the system to automatically verify the personal data of the applicants.

“Integrating the processes of all transport sector agencies and stakeholders through ICT has resolved institutional weaknesses that undermined the safety, reliability and efficiency of transport and trade networks,” said Josphat Sasia, the World Bank team leader for the EARTTDFP.

Since 2017, more than a million vehicles and motorcycles have been registered on the TIMS platform. E-stickers now replace the physical inspection stickers for public transport vehicles, and more than half a million applications for smart driving licenses have been processed. Data on each of these documents is stored on a chip that is integrated with TIMS and can be retrieved by law enforcement agencies from any location using mobile technology.

According to the October 2019 Kenya Economic Update, the growth of Kenya’s ICT sector, at an annual average of 10.8% since 2016, has become a significant driver of economic development and job creation in all areas, and the infusion of ICT in the transformation of the transport sector has cemented Kenya’s reputation as Africa’s Silicon Savannah.