A Jamaican Woman is Raising Crops, and the Next Generation of Farmers 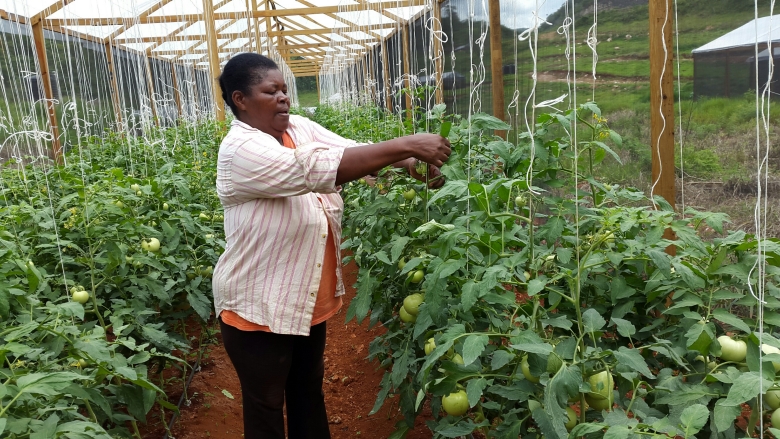 Behind Louise Lawrence’s friendly smile and pleasant manner is a steely resolve. That resolve is necessary as she navigates a typically male-dominated field as a farmer in St Ann, on Jamaica’s verdant north coast.

Louise has chosen farming, in particular greenhouse farming, to make a living. She admits that it was not her first choice of a career, but she now believes farming is her calling. She says, “were I to live my life over again, I would have started farming earlier.”

Over 160 farmers in three parishes benefitted from this project, and over a hundred other farmers have benefitted indirectly. Not only does REDI support those who choose farming, but the program also connects them with ready markets to encourage their success.

Collectively, the Watt Town Greenhouse Farmers Group operates 22 greenhouses in addition to open field farms. Louise directly operates one greenhouse and also oversees the operations of three other greenhouses, one owned by her husband. And she is good at it - in only six years as a farmer, Louise has already received awards and recognition for her greenhouses.

The second phase of the project, known as REDI II, was approved in November 2019 with US$40 million in financing from the World Bank. Louise reports that JSIF recently provided the farmers, through REDI II, with personal protective equipment, including masks, hand-held thermometers, and hand sanitizers, to curb the spread of COVID-19. She underscored the point that “COVID is real,” and as a community leader, Louise helps to spread the message of keeping socially distant, wearing a mask and frequent handwashing.

"Were I to live my life over again, I would have started farming earlier."
Louise Lawrence

Her vigilance is, in part, because Louise and her team have been hit hard by the pandemic. They used to sell collectively to a distributor who then sold their produce to hotels. With fewer tourists visiting Jamaica, the demand for their produce has been low. However, Louise says that a cold storage facility, built by JSIF, has been particularly helpful as it extends the life of their produce while they seek other buyers. Some farmers have turned to other income-generating opportunities, like selling phone credit to enable children in the area to attend school remotely.

Currently, Louise is concentrating on growing tomatoes as she has had some issues lately with sweet peppers. And while markets have been reduced because of the pandemic, Louise says that she continues to make a good living. She is encouraging more people to get involved with agriculture. She says that while the work is hard and the money may not be steady, the reward of feeding the nation, and by extension, the world, cannot be underestimated.

Just as JSIF provided her with the knowledge necessary to begin her career as a farmer, she is also passing that knowledge on to others who are interested. She shares that one of the youngest farmers in her collective is 21-year-old Emanuel Downer who she calls a hard worker, willing to pitch in and work with others. He is making progress, she said, and is now building a house. She says that some of the young people often become discouraged, but Louise is undeterred and continues to share with those eager to learn, especially as so many have lost jobs.

She has walked in their shoes. At one point, Louise was unemployed after spending time as a teacher, and other previous careers. Louise credits the REDI program, and the support of JSIF, for setting her on a path where she could send her children to school, giving them an opportunity for greater success. She believes that her son, Jovan, may one day follow in the footsteps of his mother and father in agriculture. Her two daughters have happily chosen their careers outside the field, Mitsue is a health inspector, and Keneice is a teacher.

Louise Lawrence is a proud ambassador for the REDI initiative as she has seen how it can transform lives. Because of farming, she is financially independent and her children are all making their own way in the world. Louise has now set new aspirations, that of homeownership. With a solid track record of achievement and determination, she has shown that she can take on any challenge.