Earth Day Marks Entry Into Force of Escazú Agreement, a New Environmental Law Treaty for Latin America and the Caribbean

Today, the world celebrates Earth Day, a commemoration that began in 1970 to mark the anniversary of the birth of the modern environmental movement. Since then, Earth Day has become a global event where the international community at large focuses the spotlight and global momentum on tackling the most pressing environmental challenges of our time.

It was on Earth Day that the Paris Agreement was formally opened for signature five years ago, and today, a Leaders’ Climate Summit hosted by the United States is scheduled to begin with countries representing up to 80% of global greenhouse gas emissions. Additionally, hundreds of parallel events are taking place around the world today in a grand display of global environmental awareness.

This Earth Day has special significance for the Latin American and Caribbean region (LAC): it marks the entry into force of the Regional Agreement on Access to Information, Public Participation and Justice in Environmental matters in Latin America and the Caribbean, also known as the “Escazú Agreement.” This Agreement’s entry into force constitutes a major milestone as it is the first regional environmental agreement in LAC. The following story focuses on the key provisions of the Escazú Agreement and its relevance for the region and the World Bank’s work.

Why is the Escazú Agreement significant?

The Escazú Agreement builds upon Principle 10 of the Rio Declaration on Environment and Development (Rio Declaration), one of the many products of the landmark Rio Convention in 1992 (Earth Summit). Principle 10 is centered around the key tenets of access to information, public participation, and access to justice in environmental matters, all elements that are a widely regarded as fostering environmental governance, transparency, participation, and accountability.

The Escazú Agreement was mooted at the Río+20 Summit (World Summit 2012). It was adopted in March 2018 in Escazú, Costa Rica, and is the first regional environmental agreement for LAC.

In itself, this is a key milestone for the region. The Economic Commission for Latin America and the Caribbean (ECLAC) served as the forum for the four-year negotiation process which also involved significant public participation. It will no doubt play an important role in debates around environmental governance in LAC and more broadly in international environmental law, especially as additional countries ratify the treaty. 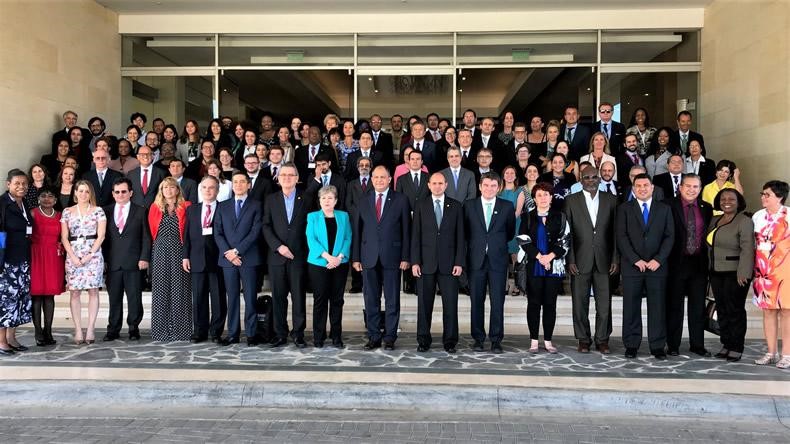 Group photo of the delegates attending the Ninth Meeting of the Negotiating Committe of the Regional Agreement on Principle 10, in Costa Rica. Source/Photo: ECLAC

The Escazú Agreement is comparable in scope and content to the Aarhus Convention, a regional agreement that was negotiated in the 1990s under the umbrella of the United Nations Economic Commission for Europe. The Aarhus Convention has since evolved into a broader regional agreement ratified by 46 countries in Europe and Central Asia, as well as the European Union. Some of the provisions of the Aarhus Convention—the first to cover the key tenets of Principle 10—were innovative and a source of inspiration for many of the provisions of the Escazú Agreement, which also features innovations of its own.

What are some of the main provisions of the Escazú Agreement?[1]

The main pillars of the Agreement are access to information, public participation, and access to justice in environmental matters, all of which are recognized as “access rights.” The treaty’s objective is to “guarantee the full and effective implementation” of these access rights in LAC, and “the creation and strengthening of capacities and cooperation, contributing to the protection of the right of every person of present and future generations to live in a healthy environment and to sustainable development.”

To implement the Agreement, each Party is guided by several principles, including equality and non-discrimination, transparency, maximum disclosure, accountability, intergenerational equity, non-regression, and the precautionary principle. Parties to the Agreement must “guarantee the right of every person to live in a healthy environment and any other universally-recognized human right related to the present Agreement.” For each access right, the treaty also spells out specific requirements:

Overall, the Agreement addresses the needs of vulnerable persons and groups, including indigenous peoples, such as by requiring that they receive assistance so as to exercise their access rights under the Agreement. The Agreement also reflects a concern for the safety of environmental advocates by requiring each Party to, among other obligations, “recognize, protect and promote” the fundamental rights that allow these advocates to exercise their access rights. It also seeks to protect them from threats, attacks, and intimidation. 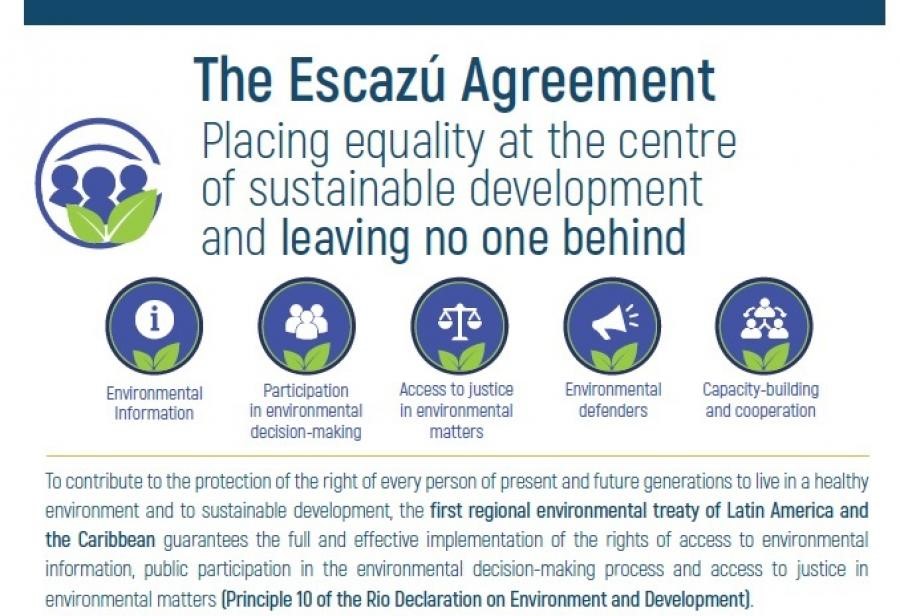 Which countries are Parties to the Escazú Agreement?

As of the date of this post, the following countries had ratified the treaty: Antigua and Barbuda, Argentina, Bolivia, Ecuador, Guyana, Mexico, Nicaragua, Panama, Saint Vincent and the Grenadines, Saint Kitts & Nevis, Saint Lucia, and Uruguay. The list may evolve rapidly, however. Twelve other countries have signed but not yet ratified the Agreement, and others are considering becoming Parties as well. An up-to-date list of Parties can be found here.

What is the relevance of the Escazú Agreement to the World Bank and Member countries?

Countries in LAC that are already Parties to the Escazú Agreement or considering acceding to the treaty should consider how to implement its provisions. Each Party is required to adopt the domestic measures necessary to implement the Agreement, but this does not mean starting from scratch.

Most countries already have laws that allow the public some form of access to environmental information, participation in environmental decisions, and access to justice. Countries should therefore consider how existing national legal frameworks align with the treaty, and consider whether adopting new laws or regulations would be necessary.

That can be a challenging undertaking. Fortunately, the Escazú Agreement recognizes that it may take time for some Parties to fully implement its provisions. It also contemplates capacity building activities to strengthen national laws, build the capacity of civil servants, and raise awareness among members of the public with the cooperation and support of other Parties and intergovernmental organizations like the World Bank. The treaty establishes a committee to support implementation and compliance, and a voluntary fund for those implementation efforts. The Agreement also calls for such activities as workshops, technical assistance, guidelines, and good practices and standards.

There may be scope for World Bank assistance to be directed at strengthening national systems in light of the Escazú Agreement. Through technical assistance and other operations, the Bank can inform and support countries’ reform efforts. In addition, under the Environmental and Social Framework, World Bank Member countries provide project-affected stakeholders meaningful access to information, opportunities to participate in the design and implementation of Bank-financed projects, and means to seek redress for project-related harms and concerns.

Key Environmental and Social Framework requirements align with the provisions of the Escazú Agreement—in particular, that disadvantaged and vulnerable groups should have the opportunity to participate in and benefit from projects, and that those who share views about projects should be protected from reprisals and retaliation.

Where can I learn more?

The Escazú Agreement has its own website, where you can find the text of the agreement in several languages. ECLAC also maintains an Observatory on Principle 10, which includes updated information and resources such as legislative and policy measures, jurisprudence, and other publications and guidance materials.

A full day of public, online celebrations is scheduled for today; join if you can at: https://www.cepal.org/en/events/day-celebrations-entry-force-escazu-agreement

[1] The following sections contain quotes to the provisions of the Escazú Agreement, which can be found here.