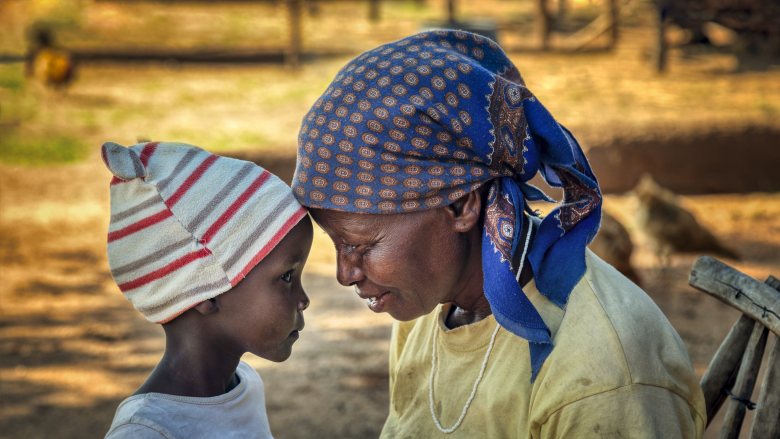 Image of a child with her grandmother in Southern Africa/ Shutterstock

, from coastal cities pummeled by stronger storms, to harvests blighted by locusts, droughts and floods.

. Whereas cyclones in the 1970s used to kill tens of thousands of people in places like Bangladesh, they now take far fewer lives thanks to better preparedness and investments in cyclone shelters, community based early warning systems and improved storm forecasting and tracking by satellite.

The World Bank’s disaster risk specialists help countries around the world prepare for catastrophes such as earthquakes and extreme weather events with support from the Global Facility for Disaster Reduction and Recovery (GFDRR). 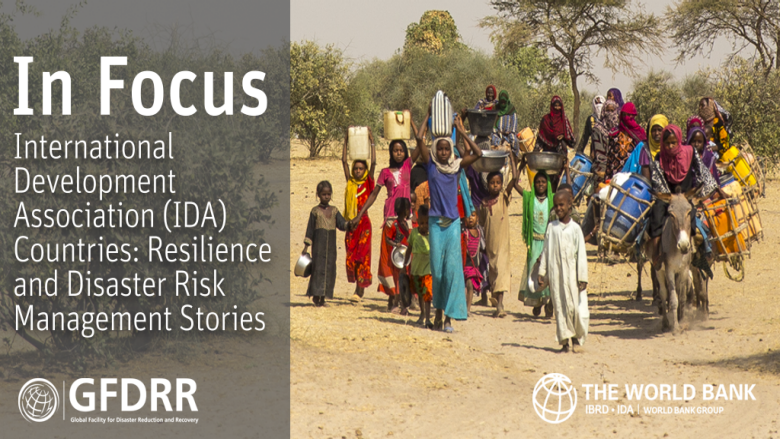 Much of that experience in recent years has focused on leveraging advances in digital technology to increase different aspects of resilience. Examples below cover shared datasets and maps in Bangladesh, drones and mobile devices in Tanzania, and digital representations of vulnerable shorelines and population centers in the Marshall Islands. Collectively, these tools increase the power of decision-makers to chart a better future in the face of increasingly challenging climatic conditions. 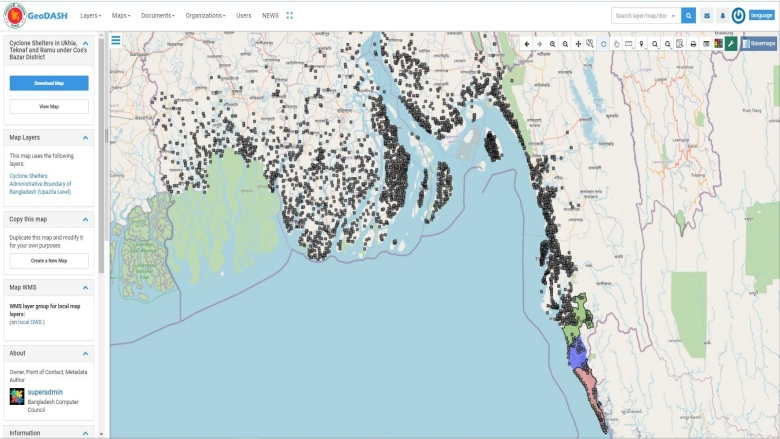 In Bangladesh, one of the climate vulnerable countries in the world, cyclones over the Bay of Bengal have already increased in frequency and are projected to become more intense. Mapping vulnerable areas using Geographic Information System (GIS) and making datasets available across agencies is leading to better informed decision-making.

While location data and maps were held previously by individual, non-networked agencies, they are now available for cross-referencing on a platform called GeoDASH, supported by GFDRR and transferred to the Bangladesh Computer Council in December 2015. As of April 2021, over 3,700 users representing 55 public, private, and civil society organizations have shared data, making available 740 datasets from road network maps and building footprints to the location of water, gas, and utilities in a secure platform. All of these datasets are available to the public in a widely usable format.

The platform has been used by the Directorate of Primary Education of Bangladesh to assess 35,000 schools with respect to the type of infrastructure, water and sanitation facilities, access to roads, and overall capacity during natural disasters. Bangladesh’s Local Government Engineering Department used geospatial layers to produce cyclone risk maps that will guide investment plans for cyclone shelters in both urban and rural areas of Bangladesh. GeoDASH was also instrumental in the design of the first phase of the IDA and CIF-funded Coastal Embankment Improvement Project, a project focused on improving 10 vulnerable coastal polders of Bangladesh with coastal embankments, hydraulic structures and protective works. And geospatial data analysis supported by the platform informs the ongoing Urban Resilience Project that is strengthening the capacity of government agencies to respond to emergency events and reduce the vulnerability of future building constructions to disasters in the cities of Dhaka and Sylhet. 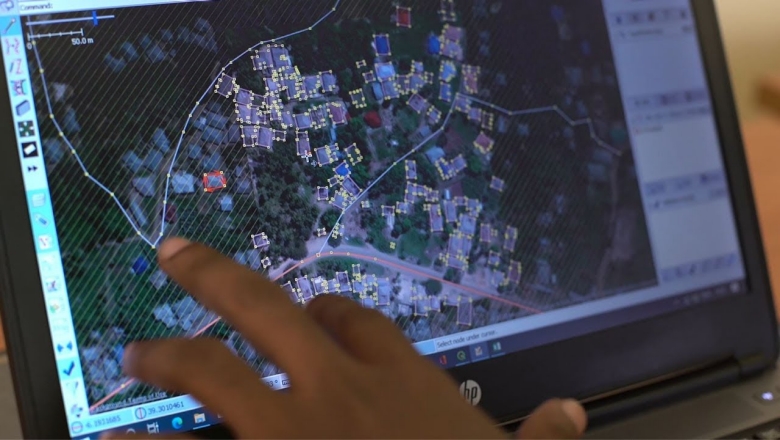 Using drones and micro-tasking in Tanzania

In Tanzania, extreme climate events frequently result in economic losses that exceed 1% of GDP and threaten the majority of Tanzanian’s livelihoods because of their high dependence on natural resources. Adaptation priorities, as identified in the country’s 2015 Nationally Determined Contribution, focused on agriculture and water resource management; coastal protection; alternative clean energy sources; sustainable tourism activities; and community awareness programs in public health. But rapid urbanization is shifting the disaster risk profile in Tanzania, as it is across Sub Saharan Africa, with urban settlements increasingly vulnerable to floods, cyclones and earthquakes.

Low-cost digital tools are helping bridge an important data gap as towns and cities continue to grow in unplanned, unsurveyed manners. In Dar es Salaam, for example, where informal settlements along the banks of the Msimbazi River are vulnerable to flooding during the rainy season, citizen scientists and drones were mobilized to help improve the accuracy of soil maps to better guide urban decision-making.

Using this approach, the Tanzania Urban Resilience Program,  a UK AID-funded initiative jointly implemented by the World Bank and the Government of Tanzania, was able to conduct flood modelling for the city at a fraction of the cost and with greater accuracy than traditional surveys.

The program has also created an innovative Resilience Academy, where students learn practical digital skills while working to make their countries safer from climate change. Using drones and household surveys, students mapped the whole island of Zanzibar for example:  by digitizing 500,000 buildings, their work increased the previous building register of only 163,000 dwellings.

This participatory approach was expanded in 2020 to tackle the challenge of mapping urban trees. At a time when the pandemic left many people unemployed, 50 young people – most of them between the ages of 19 and 25, were paid to locate trees via a cellphone app.  Since tree roots retain soils and tree canopies retain water and reduce flash floods, the proportion of urban tree cover in the river basin is a critical part of any flood-abating plan. The labor-intensive but simple task was well suited to micro-tasking, a type of work where big projects are broken down into small digital actions. A similar pilot was also conducted in Freetown, Sierra Leone, with positive results pointing to larger and possibly more rewarding and increasingly skillful employment possibilities in the future.

"By working with local people and communities to collect data we can be timely andmore responsive, we can lower costs, and ultimately ensure these data are actionable. This opens exciting avenues for participatory risk management that increases urban resilience in low income countries. It is particularly useful in settings that are unplanned and hence unmapped while growing at a fast pace. UN ECA estimates that in Africa only 2.9% of the continent is mapped at local scales, in contrast to over 87% of Europe. "
Edward Anderson
Senior Disaster Risk Management Specialist, World Bank 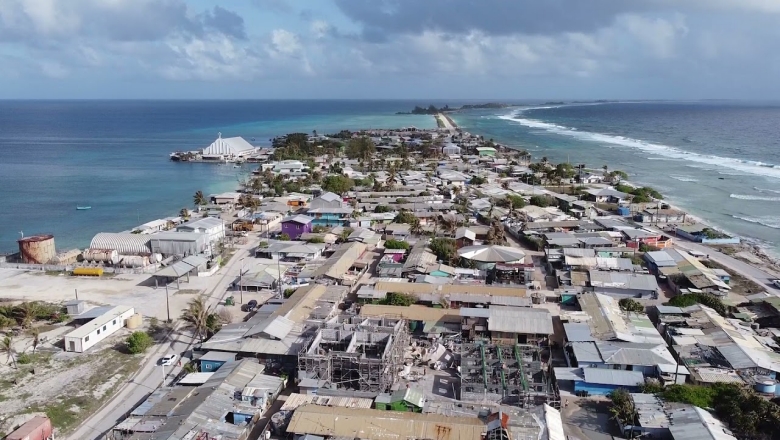 Imagine an island that is 200 meters wide and two meters above sea level. Where can people safely live on islands like these? The Marshall Islands, one of the world’s four all-atoll island countries, face a potential sea level rise as high as two meters within the next 100 years.

With rising sea levels posing an existential threat, the government of the Marshall Islands is keen to better understand the scale of the threat from climate change, to guide adaptation decisions and investments far into the future.

Ongoing technical assistance from the World Bank will help visualize different scenarios with a 100-year horizon, using layers of new data in a compelling way. An interactive StoryMap is being developed with various data sets (including all public and private buildings) to help convey recorded and projected sea level rise impacts. Work so far includes scenarios that effectively convey the impacts of possible sea level rises for the main islands of Majuro and Ebeye.

In support of the country’s National Adaptation Planning process, it is expected that these scenarios and visualizations will inform future investment decisions by the government and international donors.  This technical assistance presents a framework for assessing both incremental and transformational options such as raising and reclaiming land to increase safe areas for people to live, painting pictures of possible pathways and hope for the future.

The visualization tool is essential for a consultative and holistic approach to climate adaptation.

"Because it is so constrained, people’s attachment to land is very strong. In the Marshall Islands case, the land tenure system is extremely complex and extremely rich, so any adaptation option that looks at creating new safe places for people to live has to understand these types of situations and this context. Being able to visualize not only current impacts but future scenarios and options for adaptation became a key component of the project to equip the government with a very powerful tool for its own consultation and planning process."
Artessa Saldivar-Sali
Senior Municipal Engineer, World Bank