Childcare for Garment Factory Parents Is Investment in Human Capital 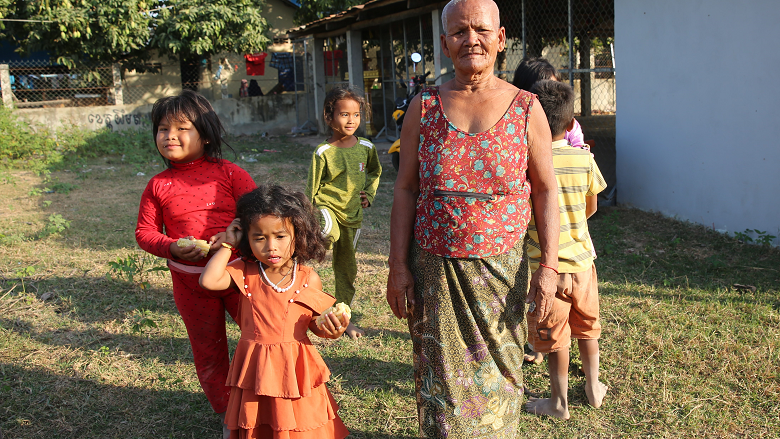 71-year-old Sok Kim walks slowly on her bare feet toward a group of visitors to her village, stooping to hold the hand of her youngest grandchild. This formidable old lady greets the large delegation with a broad smile.

“I hurried here to meet you all and thank you for the center you’re going to build here for our children,” she says, before turning round to check that the other four grandchildren with her are following.

Grandma Kim looks after eight grandchildren from 1 to 6 years old while her four children go to work at garment factories. Although the childcare center has yet to be built, she is confident this will happen soon.

“You know, every afternoon I see my grandchildren playing on the road or at the neighbors’ houses, and I shout at them to come inside. Then I close the gate, as I’m afraid they will be run over by cattle.” She laughs out loud but then takes a deep breath. “It’s hard work, and I can’t really take good care of them.”

Kim lives in Prey Chap village in Samrong Tong district, Kampong Speu province, Cambodia. The planned childcare facility is one of 22 such centers to be built under the Community-based Childcare for Garment Factory Workers project, which is supported by the Japan Social Development Fund, administered by the World Bank and implemented by a non-governmental organization, Planète Enfants & Développement.

The childcare centers are new designed for the young children of garment workers. Each center will be able to receive 25 children aged 3 to 36 months old. Three qualified and trained caregivers will be hired for each center. The caregivers receive mandatory training on child development, health and nutrition, and learning through play. Per the plan, the monthly childcare service fee will be around US$50 per-month-per-child and this fee will be shared by workers and their employers. The centers will open for six days per week to accommodate the worker’s working schedule and hours.

The project is supported by various government bodies including the Ministry of Education, Youth and Sport, the Ministry of Labor and Vocational Training, and provincial, district and commune administrations.

The Deputy Governor of Kampong Speu province, Long Bonareth, urged all concerned departments, districts and communes in her province to support in the project to ensure its smooth progress.

“If we want to build rich human resources, we should start by investing at these early ages. Childcare centers are good places to start,” she said. “These centers provide a good opportunity for children from less well-off families, particularly those of garment factories workers, to access a quality of care and education that is similar to those used by as well-off families.”

Long Bonareth noted that being able to use the services of trained childcare staff would help women have confidence in the hygiene and safety provided for their children and enable many to resume their careers after giving birth.

The International Finance Corporation’s Tackling Childcare research shows that  T To put it another way, providing access to childcare enables more women and men to participate in paid jobs.

Som Nady, an administration and human resources manager at the Cerie Garment Factory in Kampong Speu, says that his company welcomes the initiative. According to Nady, most new mothers quit their jobs or ask for extended maternity leave after giving birth, and even those that do return to work are often absent because they have no one to take care of their children.

“Resignations, requests for maternity leave extension and absences really affect our production chain,” he says. “When we have to recruit new workers, it takes at least one month to get them up to speed.”

When she goes to work, 31-year-old garment worker Srun Saren of Chom Bok village, also in Samrong Tong district, leaves her two children with her grandmother. Her grandmother is 75 years old, sells convenience goods in the village, and does not always have time to look after the children properly. Saren is now expecting a third child and plans to quit her job when the baby arrives as she will have nobody to care for the three children adequately.

When she learned that a daycare center is going to be built in her village, Saren was delighted. “I’m glad to hear that,” she smiled, “and I’ll be happy to contribute the necessary fees. This will help me a lot: my kids can learn and stay healthy, while I’ll be able to continue my work. I don’t want to stop working as I get good pay.”

Her village chief, Ly Lang, says that land has already been allocated for the building of the childcare center following discussion between the villagers, garment workers, an advisory committee, and the local authorities. The advisory committee was established at the community level to provide advice and direct support to community-based childcare operations. It comprises the commune chief, garment factory workers, factory managers and community members.

“This will be of great benefit to our garment workers and to the children of our village,” said Ly Lang. “We are ready to support the project”.

Back in Prey Chap village, Grandma Sok Kim laughs when asked if she will be lonely when all her grandchildren start at the childcare center. “I can always come to the center and look at them if I miss them,” she replies. “Don’t worry, I’ll be fine.”