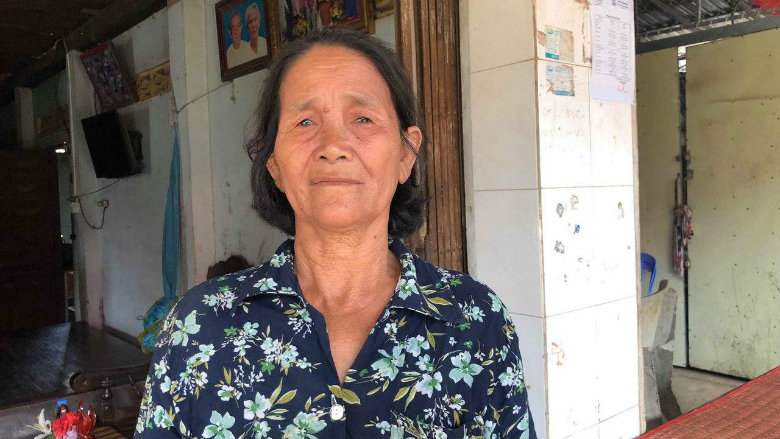 A 62-year-old Chhai Leng lives in Trapaing Veng village, Trapaing Kang Commune, Samrong Tong district of Kampong Speu province, Cambodia. She carries her five-month-old grandchild while keeping an eye on her four other grandchildren while they play with their friends.

Leng has five daughters and two sons. All of them were married and five of her daughters leave their young children with her to look after while they go to work at garment factories. Her grandchildren are between the ages of eight months and 10 years old. Leng always gets up at 4:00 am to make sure breakfast is ready for her five grandchildren when they arrive each morning. Her infant grandchild is fed with formula milk and the others are given porridge or rice with soy sauce and fried pork.

Each day Leng spends 5,000 riel (about $1.25) for snacks like candy, cookies or local cakes for her grandchildren. She doesn’t pay attention to food that is healthy or rich in nutrition.

Leng spends between 14 and 15 hours a day taking care of her five grandchildren, which leaves her little time to do other things.

“I don’t want to take this burden. It is very a hard job,” she paused. “But, if I don’t help my children, who else is going to help them? I really want to have some time to relax.”

Mother of two, Kang Somaly, 29, lives in Trapaing Kralanh village, Mohasaing commune, Phnom Srouch district, Kampong Spue province. She had to quit her job as garment worker because she didn’t have childcare for her four month-old and her 7 year old who attends primary school. While Kang is at home, she also takes care of her ailing 66-year-old mother.  She used to earn between $170 - $260 a month and now her household has to rely on only the income her husband earns as a driver—around $200 a month. The family’s income has become a big issue. Kang really wants to go back to work to support her children’s education and to cover the cost of her mother’s healthcare. She wishes there were childcare options in her village or nearby to take care of her baby so she could return to work.

Recently the World Bank, with financing from the Japan Social Development Fund, has provided a $2.7 million grant to the French NGO, Planète Enfants & Development (PE&D), to implement the Community-based Childcare for Garment Factory Workers Project.  This project will establish 22 childcare centers to provide community-based childcare services for children of garment factory workers between the ages of 3 and 36 months. Providing safe, reliable and affordable childcare will enable workers to stay employed or return to work sooner after maternity leave, reduce absenteeism due to child illness.

In addition to the benefits to the mother and other family caregivers, the childcare centers will contribute to each child’s development by focusing on cognitive growth, motor skills, social skills and early learning.  They will also provide the children with healthy meals for better nutrition and will monitor their development for better health outcomes.

Nathalie Dupont, Executive Director of PE&D shared her views on the project, said: “One of our highest priorities is to build the trust of the families we will be serving. The childcare centers will have quality equipment and learning material. Caretakers will be carefully trained. And each center will be monitored by an advisory committee including local leaders and the parents themselves. We will also support parents with educational activities on nutrition, positive parenting, budget management, early learning methods and child health. In the end, the project will be a success if the children are happy to go to the centers while parents feel confident going to work.”

This four-year project, which is just starting, is expected to benefit about 3,125 households, mostly from Kampong Speu province, which has more than 120 garment factories and provide wage employment for over 112,000 workers, 84% of whom are female. Other provinces will be included depending upon factory engagement in the project.

While most garment factories who provide childcare support for their workers do so in the form of small cash allowances, factories participating in this project would provide financing to the childcare centers to reduce the cost to the workers. Two international buyers, VF Corporation and Clarks Shoes are leading the way by committing to be project partners and actively encouraging their supplier factories to participate. Private sector participation which the International Finance Corporation (IFC), a member of World Bank Group, is facilitating, will be important to ensuring the sustainability of childcare centers and their expansion over time. Research from IFC has demonstrated business benefits of supporting childcare, in the form of reduced turnover, fewer days absent, and increased focus and productivity on the job.