The Future Starts in School: Preparing Brazilian Youth for Their Transition into Better Jobs 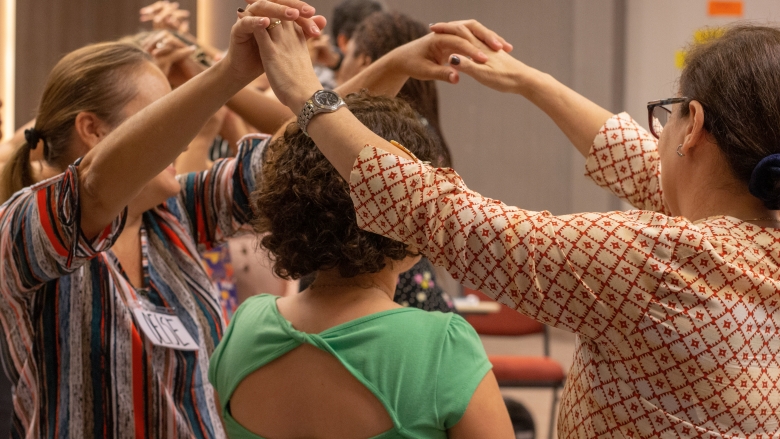 A World Bank study carried out in Pernambuco State in 2018 identified a number of factors contributing to the fact that 11 million young people – two-thirds of them women and girls – are neither working nor in school in Brazil. The study connected the high rates of youth out of school, out of work, and not in any job or training with barriers those youth face. The first is related to students’ impressions that continuing an education and finding a job is not perceived as important, valuable or feasible for them (particularly young women shared this perspective), and the second relates to students’ lack of knowledge or preparedness to take steps toward achieving their aspirations. How could students be motivated and supported to complete school, transition into work, and achieve?

The World Bank team followed up the study with a pilot project in the favelas and disadvantaged areas around northern Rio de Janeiro, aimed at developing a toolkit for teachers so they can better engage and connect with students and address the barriers identified in the study. After the first year, a review of the pilot indicates that as schools become more supportive communities, as shown during testing the teachers’ toolkit, the absenteeism trend begins to improve and students recognize the value of completing education as well as the importance of getting a good job.

A significant share of young people in Latin America are not in school or working. They’ve been nicknamed “NEETs” (not in education, employment or training) or “nem-nems” (meaning neither-nor in Portuguese). Young women (ages 15-29) are especially prone to not continuing into jobs, often aspiring to and assuming traditional roles caring for children at home. The World Bank partnered with the State Education Secretariat of Rio de Janeiro and Promundo, a non-governmental organization specializing in gender equality and related research and advocacy, to address the underlying reasons why the female share of NEETs is so high.

In 2018, Ana Luiza Machado and Miriam Muller from the Poverty and Equity Global Practice at the World Bank published a qualitative study entitled “If it’s already tough, imagine for me,” to better understand why women made up such a high proportion of NEETs in Brazil.

The research found these youth face common stumbling blocks as they become young adults. A fundamental barrier was posed to many in a  lack of aspirations and motivation to attend or return to school (rooted in social exclusion and traditional gender norms) , but there was also inaction even when youth had the motivation to find a job, due to a lack of information, tools, and resources to pursue their dreams. Thirdly, there were external factors, such as a lack of transport, limited or no childcare, and the toll of crime and violence in their neighborhoods.

“The pilot project was about taking our research to the next level and to effect a change in policy to address the issues we identified,” said Muller.

“By and large, what we discovered is that the rigid gender norms and the lack of economic opportunities conditioned how a young woman envisions her future, meaning what she is allowed to wish for or feels she is entitled to,” Muller said. “In our study, there seemed to be a ceiling in that the most women generally aspired to was one day having a small but clean house and maybe a husband who stays.”

“But schools also played a fundamental role in this dynamic: Our research showed that school wasn’t perceived as a place where many of those young people who would later be out of school and out of work felt comfortable, well-received, and heard. It was not a place of belonging for them.”

The study also looked at young women and men who, despite the odds, succeeded in school, continued their studies at the university level, and achieved. There was a common thread: Those who “made it” had strong support networks, and that wasn’t always a family member. Often, the biggest influence on the lives of the young people who succeeded was a teacher – someone who believed in them and planted the idea that they too could become something else, and that they have the right to pursue their dreams.

The Designing Futures project has one main concrete output, which is a 22-chapter  toolkit and training guide aimed at supporting educators’ daily plans, helping them foster open and frank dialogue with their students about more equitable relations between men and women, the world of work, and possibilities for continuing education. The booklet contains activities with guidelines that address the main reasons why young people become disengaged. The toolkit also helps to identify the main issues that are common among students in a class, allowing teachers to make a semester plan focusing on those most common challenges. The toolkit was designed to be used by both girls and boys and aimed to trigger debates and critical reflections on gender roles and how they may limit the opportunities of individuals.

Two high schools in the poorer areas of northern Rio were chosen by the State Education Secretariat for the pilot, with 250 first-year students participating. First-year high school students are most at risk for dropping out. The feedback was overwhelmingly positive, and there are currently discussions on how to broaden the scope of the intervention

“School has now become a place where the students feel at home, and they feel a sense of community. Attendance has improved since the beginning of the year, according to the teachers,” said Muller. “With the help of the intervention and the material provided in the toolkit, school becomes a place where kids feel heard.”

The teachers too are empowered and supported. Muller recounted how one teacher told her she used to spend hours in the principal’s office crying, because she didn’t know how to deal with aggression from the students in class. Having a protected space to talk through troubles or concerns has alleviated much of that, and generated comprehension from the students, the teacher said.

One Portuguese teacher who participated in the pilot said engagement and performance have both been improving. In a recent assignment, her students included her on a WhatsApp group for support, she provided feedback and the students handed in final drafts taking into account her feedback. Thus, their grades improved, she said.

The World Bank office in Brazil supported the pilot project with $49,000 over a two-year period, which included the development of the material in the first year with the involvement from teachers and the implementation of two rounds of testing and revision in a separate school for the second year. The LAC Gender Innovation Lab supported the pilot through technical assistance related to the process/qualitative evaluation. Due to COVID-19, only one round could be implemented in the 2019 academic year.

The NGO Promundo, having worked on other gender-related issues and advocacy in Brazil, led the development and design of the content and the organization of the intervention. The Education Secretariat of the State of Rio de Janeiro assisted in identifying the pilot schools and supported the toolkit’s testing with teachers and students. To deepen the debate on out-of-school and unemployed youth with educators and public school students, discussion meetings were held with 10 educators from two high schools in the Complexo da Maré favela in Rio in April 2019. These meetings also served as a basis for the development of the activities for the toolkit.

The public launch of the initial research, “If it’s tough, imagine for me,” which inspired the follow-up work, was broadcast in a panel format by Futura TV, a cable channel focused on education, in May 2018. The seminar was widely covered by the press, which generated more than 5,000 downloads of the report. Promundo was one of the panel participants and suggested entering into partnership to develop tools that could help students and teachers to overcome the barriers identified in the study.

The Designing Futures pilot project was met with great enthusiasm from the teachers, students and administrators who were involved in the work, as well as from the main partner, Promundo. While the testing and development made progress during the first half of the project year, the second half had the added complication of the COVID-19 crisis, so that most programming had to be suspended. However, initial discussions have focused on bringing the same type of intervention to the rural areas, which suffer even greater degrees of poverty and marginalization, which in turn has a disproportionate effect on women and girls. At a later point, with further honing of the resources and materials, such an approach could be taken up by different states in Brazil, and/or integrating the learning into the national training programs for teachers and school administrators.

“I do plan my future now. I won’t just wait for tomorrow. Now is now,” said one student who participated in the pilot.