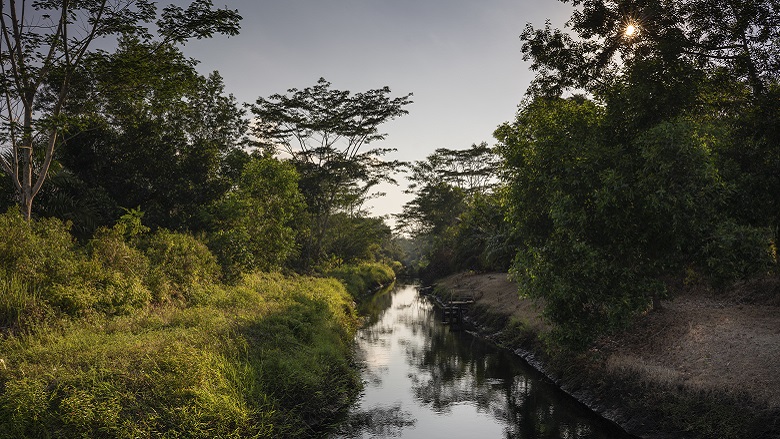 If you want to understand the impact of tropical forest loss in Indonesia, Sumatra is a good place to start.

that are home to majestic tigers, rhinos, orangutans and elephants, along with more than 15,000 plant species. Sumatra’s forest loss has helped make Indonesia one of the world’s largest emitters of greenhouse gases (GHG) resulting from land use and driven one of the highest rates of primary forest loss in the tropics.

In Sumatra, the stakes are particularly high for Jambi Province. This 5-million-hectare area is home to 2.1 million ha of ecologically important forest areas, including four national parks and the 100,000 ha Harapan rainforest. Forest loss and encroachment threaten Jambi’s forest resources. GHG emissions are increasing and already contributing to a changing climate in the area, with impacts on local livelihoods.

“Extreme weather patterns are making our harvest and rainy seasons less and less predictable,” says Akhmad Bestari, Head of Jambi’s Forestry Agency. “Over the past two years, we haven’t been able to grow duku, a staple fruit in the area, because soil conditions are either too dry or wet, which was not an issue before.”

But Bestari says the province’s drivers of deforestation don’t stop there. Mining and illegal logging also threaten Jambi’s forest resources, and more frequent forest fires linked to forest encroachment (including Indonesia’s devastating 2015 and 2019 fire crises) are an ongoing challenge in the area.

In Jambi, the national and provincial governments are working together across a wide range of sectors to improve sustainable land use. With $15 million in support from the World Bank’s BioCarbon Fund Initiative for Sustainable Forest Landscapes (ISFL)*, the goal in Jambi is to reduce emissions from unsustainable land use while promoting alternative livelihoods that help take pressure off the province’s primary forests and peatlands.

“Coffee and rubber are some good sustainable crop alternatives. If cultivated well, these can also generate even more money than palm oil. However, access to market for these commodities remains a challenge, and that’s one area that ISFL can help,” says Agus Rizal.

Akhmad Maushul, Head of Jambi’s Food Crops, Horticulture and Livestock Agency says the ISFL program will be instrumental in helping to properly manage land use in Jambi Province through agricultural land use mapping.

“There are 96,000 hectares of agricultural land in Jambi that have not been properly mapped. Once this mapping is completed, the provincial government will be able to improve land use regulation and halt illegal land conversions,” says Maushul.

To tackle these issues, an inter-agency task force has been set up to guide provincial-level policy and ISFL Jambi program implementation. Jambi’s provincial agencies for Forestry, Planning and Development, Agriculture, and Crops will be coordinating their efforts with academic institutions, the private sector, as well as NGOs and other development partners in the province, to work toward the same sustainable land use goals.

Jambi’s Planning and Development Board (BAPPEDA) is also actively participating in the inter-agency task force. BAPPEDA has a 20-year plan for Jambi that requires all development activities adhere to sustainability principles. Officials from BAPPEDA say the ISFL program is very much aligned with BAPPEDA’s goals to reforest and restore critical lands previously burned or exploited across the province.

“A cross-sectoral, intergovernmental program isn’t the easiest approach to take nor is it the quickest. It involves a tremendous amount of coordination, but it has by far the greatest potential to achieve significant and long-term emissions reductions,” says Dinesh Aryal, Senior Natural Resources Management Specialist at the World Bank.

Once emission reductions have been achieved by the ISFL program in Jambi, the province would also be able to access additional results-based financing from ISFL. Indonesia’s long-term goal is to scale up the initiative in Jambi and use it as a model for sustainable land use management across the country.

*The ISFL is a multilateral fund managed by the World Bank and supported by these donor governments: Germany’s Federal Ministry for Environment, Nature Conservation and Nuclear Safety (BMU); Norway’s International Climate and Forest Initiative (NICFI); Swiss Agency for Development and Cooperation (SDC); United Kingdom’s Department for Business, Energy and Industrial Strategy (BEIS) and Department for Environment, Food and Rural Affairs (DEFRA); and the United States Department of State (DOS).