Taking a hot shower may be something many take for granted, but for students in Khovd, one of the most remote provinces of Mongolia, it was a major challenge affecting their health, hygiene, and wellbeing.

“I lived in the dormitory without hot showers for two years. It was difficult, but no one really raised it as an issue before,” said Ts. Bolortuya, a student from Khovd University. “We didn’t like this fact at all, but somehow just accepted it and learned to live without [hot showers].”

Change started in 2019 when a group of students majoring in pedagogy came together to tackle this issue as part of a hackathon competition supported by the World Bank’s youth-focused Mainstreaming Social Accountability in Mongolia (MASAM) project.

According to the project’s baseline survey conducted in 2016, Mongolia’s “Generation Z” — youth aged 18-24 — were least likely to be engaged in public decision-making process. They were also least likely to provide their feedback on issues concerning themselves. The survey also highlighted a lack of knowledge on social accountability among the general population: people did not constructively engage in decision-making processes because they were not aware of concrete mechanisms and channels for raising their voices.

To address this issue and empower youth, the World Bank helped engage university students through a hackathon competition to take matters into their own hands. The hackathon provided a platform where the students could work in teams to identify the most pressing issues concerning their health and design creative solutions using social accountability tools.

“We selected health issues as the topic of our hackathon as students are often excluded from local health services due to their temporary residency and poor awareness of their rights,” said Amarbayasgalan Dorj, Task Team Leader of the MASAM project. “Also, a long-lived stereotype that youth are healthy in general and should not complain about sicknesses makes the young generation stay away from regular checkups or public health insurance.”

To ensure equity of participation and include the students studying outside the capital city, the competition covered students of five provinces in addition to Ulaanbaatar city.

About 300 students from more than 20 universities participated in the hackathon. They presented 108 project pitches to address their pressing health challenges. Twelve teams were selected from the hackathon and given seed funds to implement their projects. With support and guidance from the MASAM project, they went on to implement innovative initiatives in their own communities.

“Based on previous experience, we mostly used social media to engage youth, as they are Generation Z and [have been] used to the internet since a young age,” said Ms. G.Bumchimeg, CEO of Mongolian Economic Analysis and Research Center (MeARC), an organization that worked on day-to-day implementation of the youth project. 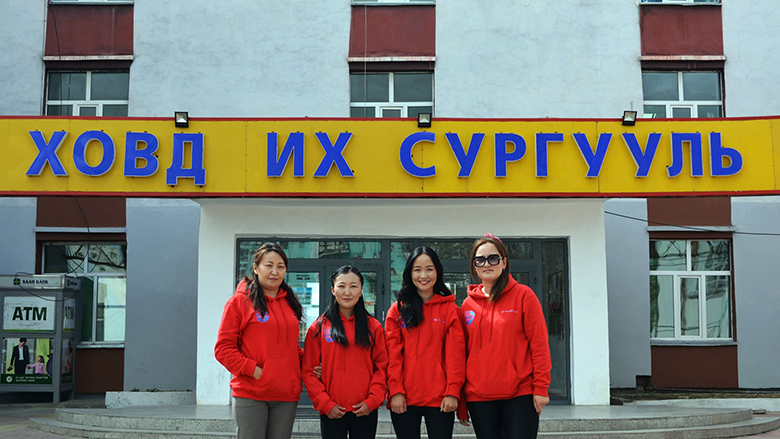 In Ulaanbaatar, one group of students tackled insomnia, a very common yet neglected health issue students face in their everyday lives. Another group introduced routine preventive testing for all students in their university.

“We realized that someone else is making decision and acting on behalf of us. Yet, it is doubtful if they truly know our issues. Thus, it is important to voice out our pressing issues to the decision makers and work together to find the solution,” said B. Byambasuren, a third-year student at the University of Finance and Economics, who implemented the insomnia project. “The project helped me realize that this is the way we can make change.”

In Khovd province, as a result of students taking up the issue of hot showers to the university board, the dormitory hot water network was repaired and put into full operation. The funding was provided from the university budget. There are still some issues remaining to be fixed, such as lack of proper ventilation in shower rooms. The students have further requested support from the Citizen’s Representative Assembly of the province and following up on this.

“MASAM’s Social Accountability through Youth subproject allowed the youth to get firsthand knowledge and application of social accountability tools,” said Andrei Mikhnev, World Bank Country Manager for Mongolia. “We are very encouraged to see youth take ownership of their health issues, find ways to raise the issues with relevant authorities, and follow up until they see positive results.”

Jointly funded by The Swiss Agency for Development Cooperation (SDC) and the World Bank, the MASAM project (2015 to 2019) was implemented in 10 aimags and 3 districts in Ulaanbaatar.