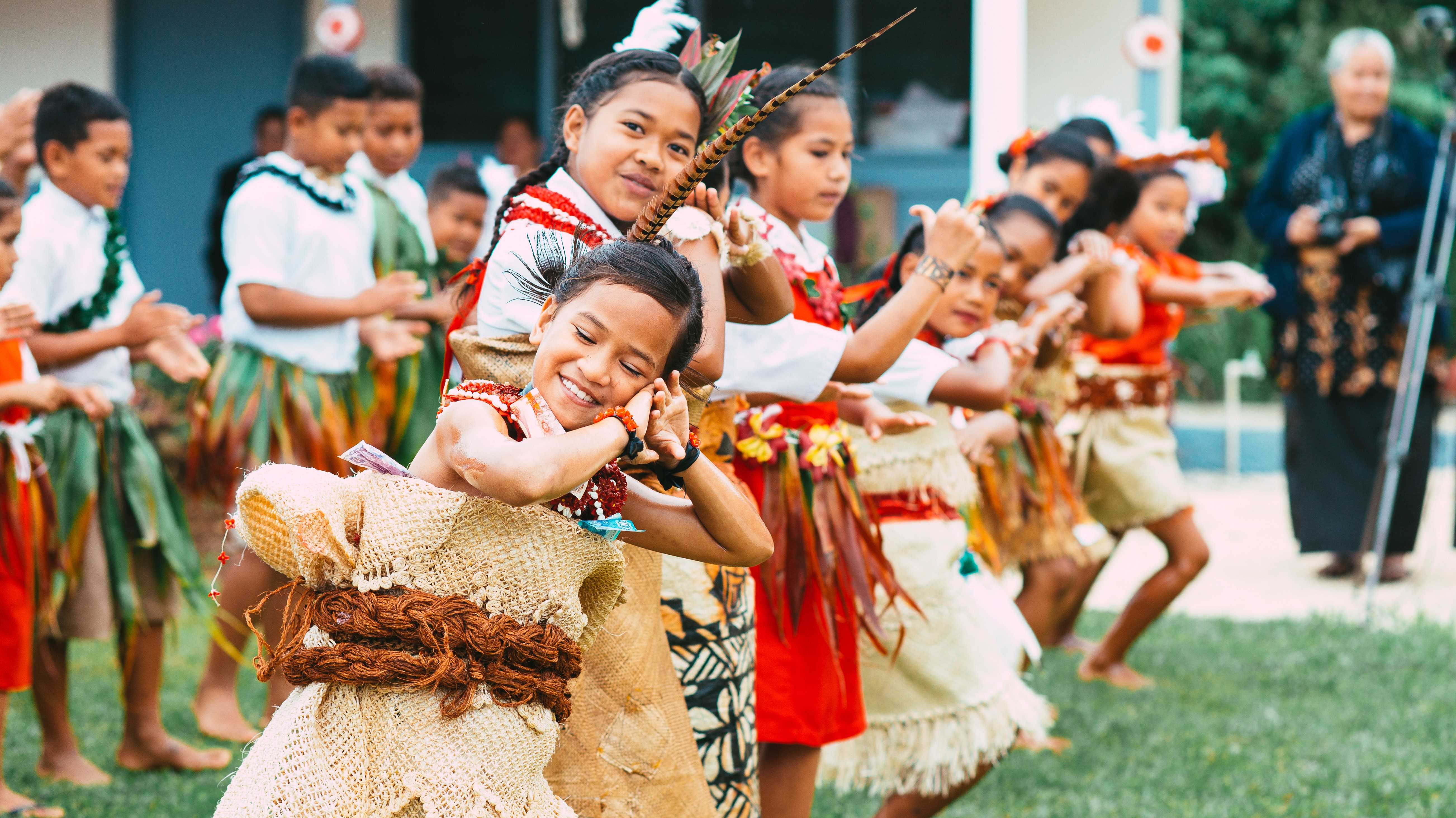 "My name is Tangikina, and I go to Government Primary School (GPS) Hoi. Our school got broken by the cyclone Gita but now we have a new school. I am very happy to be here and my new school is very beautiful. When I grow up, I want to be a teacher."
- Tangikina (closest to camera) performs a traditional Tongan dance with her classmates as part of celebrations for the commissioning of her school funded by the World Bank and the Australian Government.

Often called the ‘Friendly Islands’, the Kingdom of Tonga, in the South Pacific, is known for its generous and warm-hearted people and rich culture, kava ceremonies, vanilla exports, world class rugby, and being one of the best places in the world to witness migrating humpback whales.

Unfortunately, it is also known for being the country with the third highest risk to disasters in the world, given its extremely high exposure to cyclones, earthquakes, flooding and the impacts of sea level rise. When disasters – exacerbated by the effects of climate change – strike, the impacts can be devastating and widespread, affecting families’ livelihoods, healthcare and education.

In February 2018, Tonga was hit by Category Four Tropical Cyclone Gita, which brought with it 220 kilometer an hour winds. The impact of the cyclone was massive; sweeping across Tonga’s main island of Tongatapu, and ‘Eua island, in the country’s south, flattening homes and buildings, destroying schools, churches, and wiping out farms and livestock, leaving thousands of families’ livelihoods in tatters. The total estimated value of the damage caused by Cyclone Gita was approximately TOP 356.1 million (USD 164.1 million); close to 37.8 percent of Tonga’s Gross Domestic Product.

Through the support of the World Bank, the Government of Tonga, was able to receive urgent funding through for example, the Crisis Response Window as well as through the Pacific Catastrophe Risk Assessment and Finance Initiative (PCRAFI) disaster risk finance and insurance program, which rapidly delivered US$3.5 million in emergency funds to assist Cyclone Gita disaster response and recovery initiatives.

Schools were especially hard hit: with 109 of Tonga’s 150 schools – home to approximately 23,000 students – damaged or destroyed. In the days following Cyclone Gita, humanitarian partners provided immediate emergency education supplies and materials, including tents for makeshift classrooms. Yet as Tonga looked towards the longer-term recovery, the need for more permanent solutions for Tongan students was clear.

Following a World Bank-supported Post Disaster Rapid Assessment and a Disaster Recovery Framework for Cyclone Gita, the Government of Tonga sought the World Bank’s help to rebuild or repair schools and classrooms that had been damaged or destroyed.

Further assistance was also made available through the World Bank-funded Pacific Resilience Program (PREP).  PREP includes total funding of US$33.89million and seeks to strengthen Tonga’s resilience to natural disasters and climate change. The program began in 2015, but following the impacts of Tropical Cyclone Gita in 2018, the project received additional funding to support the reconstruction of schools impacted by the cyclone. This work has seen repairs and rebuilds of schools to higher resilience standards, to better defend them from future storms, cyclones and earthquakes.

"We can expect to be hit by more cyclones and other disasters in Tonga, so it’s important that our schools are built to be more disaster resilient to withstand future disasters – so that children can go to school and parents and communities can be reassured knowing that these classrooms are a safer and more conducive learning environment."
Natalia Palu Latu
World Bank Liaison Officer in Tonga 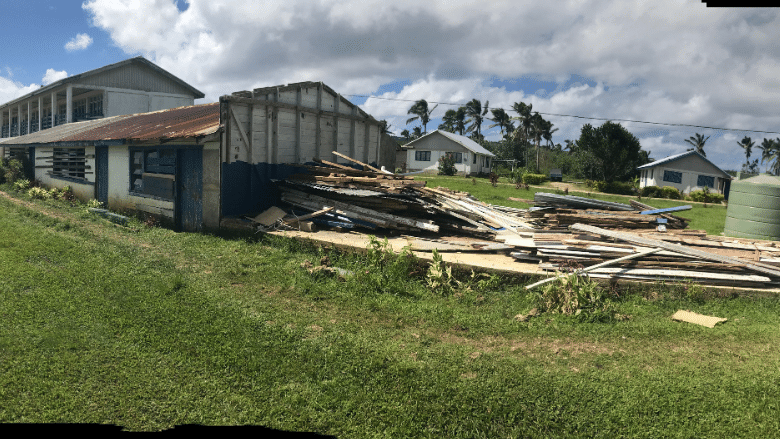 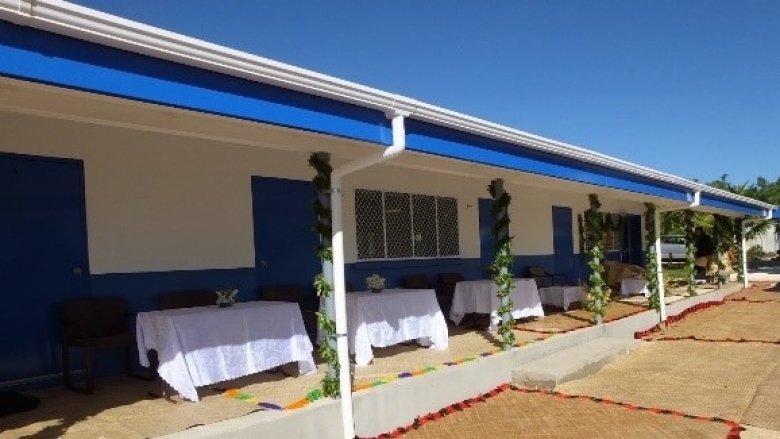 Then and now: Images of Tonga’s Hofangahau College, on the island of ‘Eua, in the immediate aftermath of 2018’s Category Four Tropical Cyclone Gita, and at the school’s recent re-opening.

Twenty-three schools with 44 school buildings and 112 classrooms were then identified across the islands of Tongatapu, Vava’u and ‘Eua as requiring repairs or reconstruction, with  US$13.81 million in World Bank funding delivered for schools’ repairs, retrofitting and reconstruction, alongside additional support from the Australian Government. This added substantially to the original project, which was improving the resilience of two schools in Vava’u, bringing the total of schools to be supported via the PREP to 25 schools.  Work for the project was prioritized according to size of the school, the damage sustained from Gita, with new and repaired school buildings and classrooms set to meet specific requirements at a standard that can withstand future disasters.

Since the project began, 16 schools with 27 school buildings and a total of 64 classrooms have now been completed, benefitting a total of 3,740 students. By the time the works are completed across Tonga by the end of 2020, approximately 9,000 students – almost forty percent of all Tongan students – will have benefited from the works.

“Cyclone Gita greatly affected our classrooms and we felt hopeless, but words cannot express how happy and appreciative we are for the blessing that we receive today. I believe that these new classrooms will improve the College’s performance, one hundred percent,” said Siu Pulu Palu, a teacher at Mo’unga ‘Olive College, in the far east of Tonga’s main island of Tongatapu.

“A good classroom atmosphere and a classroom that is safe and has better equipment, like having a whiteboard, will encourage students to do well in their studies. It will attract more students in the future as well. The students cannot wait to enter their new classrooms, in stronger schools and into brighter futures.”

PREP also works with regional institutions such as the Pacific Community (SPC) and the Pacific Islands Forum Secretariat (PIFS) to support other Pacific Island countries, including Marshall Islands, Samoa and Vanuatu, to strengthen disaster risk reduction capabilities at local, national and regional levels. PREP is funded through the International Development Association (IDA), the World Bank’s fund for the world’s most in-need countries, as well as key partners like the Australian Government Department of Foreign Affairs and Trade (DFAT).