Stemming the Plastics Tide in Indonesia: Policy, Investments, and Research 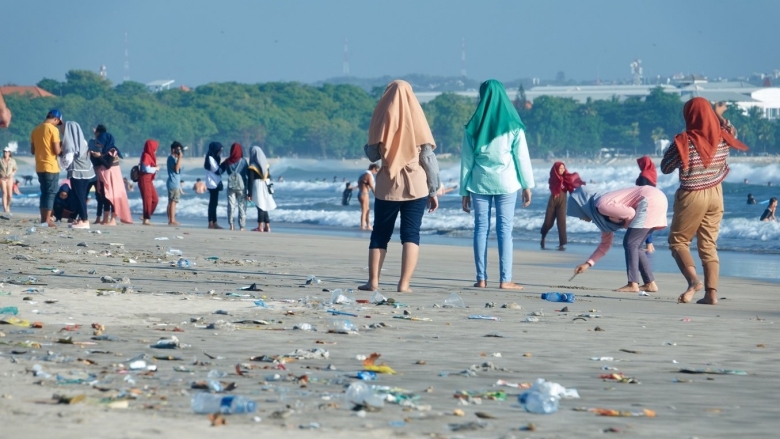 Locals stand amid plastic waste across Kuta Beach in the island of Bali.

With ocean plastics on the rise, Indonesia is engaged in its own fight against marine pollution. Jakarta—the country’s bustling, nine-million-person capital city—officiated a ban in July 2020 on single-use plastic bags in traditional markets, modern supermarkets, and minimarkets.

As COVID-19 exacerbates Indonesia’s ongoing battle with rising plastic consumption, cities are struggling to cope with the surge in online shopping, food delivery, and medical waste that is providing a seemingly endless supply of single-use plastic into urban waterways. In Jakarta, where landfills are almost at capacity, this new ban is one (necessary) step in a range of strategies that the government, private sector, and consumers need to adopt in order to combat plastic pollution.

As the world’s largest archipelagic nation, Indonesia’s rich marine resources form the backbone of its economy and identity.  With 70% of the population living in coastal areas, the ocean economy generates one quarter of the country’s GDP. . Pollution at this scale threatens to devastate fishing and tourism industries (risking over US$3 billion in annual tourism revenue) and damage the nation’s rich marine biodiversity and extensive mangrove, seagrass, and coral reef habitats.

“Through its National Action Plan, Indonesia is committed to reducing marine debris by 70% by 2025,” says Nani Hendiarti, Deputy Minister of Coordinating Ministry for Maritime Affairs and Investment. “This means bringing together multiple government agencies and stakeholder collaboration – with measurable targets to improve and adapt waste management through investment and policies across entire water catchment areas, coastal areas, and the ocean.”

Under the umbrella of the Indonesia Sustainable Oceans Program (ISOP), the World Bank is supporting a series of integrated investment projects, analytical work, and technical assistance activities that align with the government’s Oceans Policy and coastal development priorities.  The Oceans, Marine Debris and Coastal Multi-Donor Trust Fund (MDTF), funded by the governments of Norway and Denmark, is a key component of ISOP’s work and one example of how the Bank is supporting Indonesia’s marine debris agenda. Specific activities include: 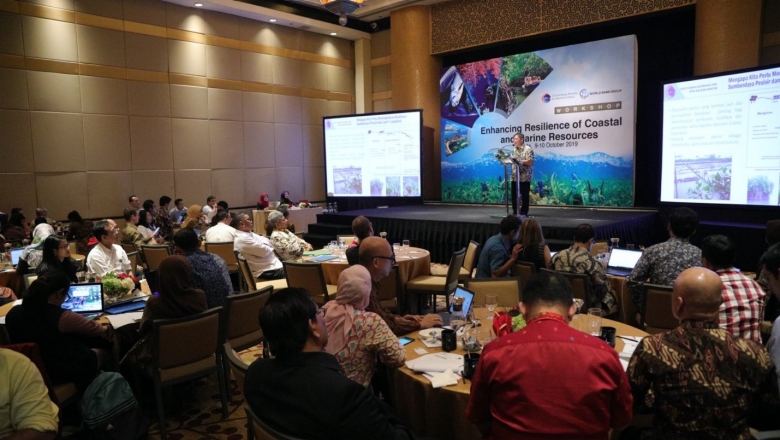 Representatives from the Indonesian government, development partners, NGOs, and the World Bank gather for a workshop co-hosted by the Bank and the Coordinating Ministry of Maritime Affairs and Investment. Credit: World Bank

Policy Support: ISOP is actively involved in the National Partnership for Action on Plastics (NPAP)—which brings together stakeholders committed to reducing marine debris—and supported the preparation of the NPAP Multistakeholder Action Plan launched in February 2020. As a co-chair of the Policy Task Force alongside the Coordinating Ministry of Economic Affairs, the Bank is providing analysis and facilitating high-level multi-stakeholder consultations to identify cost-efficient plastic policies—thus supporting existing actions such as plastic bag bans and plastic taxes.

“The World Bank is helping the government build stakeholder consensus on a series of bold policies to reduce plastic production, increase recycling programs, replace plastic with alternative materials, and improve waste management,” explains Ann Jeannette Glauber, Practice Manager for Environment, Natural Resources and the Blue Economy at the World Bank. “Designing policies is one thing, but building trust and commitment between everyone, from government, to business, to local people, will be critical in Indonesia’s success in curbing marine pollution.”

Research and Data: A lack of reliable data and concrete evidence on the sources and effects of marine debris inhibits effective coastal management and informed decision-making. ISOP is increasing analysis on the impact of ocean plastics to improve understanding on how best to address the issue.  Studies include a marine debris hotspot assessment, a baseline assessment of plastic entering the ocean, and tracking and modelling marine debris movement to help determine primary types of plastic pollution and inform reuse or recycling programs. Additionally, ISOP will soon launch a study to quantify and address the issue of “ghost nets” and fishing gear lost in the ocean. 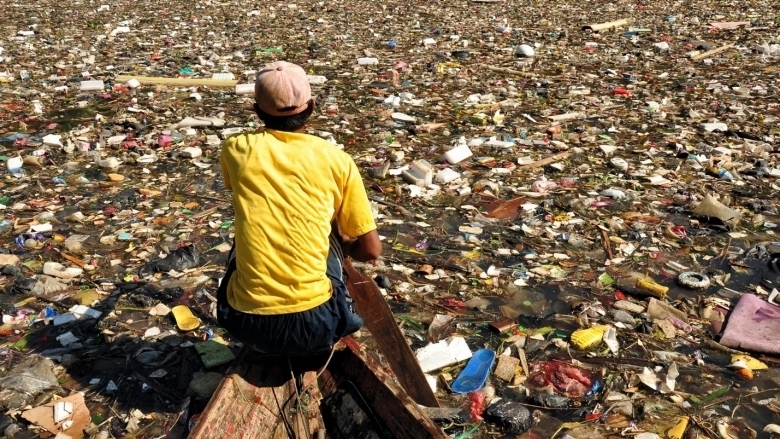 A man paddles through the infamous Citarum river in West Java, Indonesia.

Solid Waste Management:  —the Bank and the government of Indonesia made a total investment of US$326 million to halve the daily amount of waste running into the ocean by 2025.

Education and Outreach: ISOP recently conducted a behavior change study and created a Communications Playbook to guide effective outreach activities that improve community awareness and convince consumers to change how they use and dispose of plastic products. In 2019, ISOP brought together Indonesia’s most influential social media leaders at the Impactfluencer Forum to spread the message of marine pollution—effectively reaching millions of social media users around the country. With new plastic policies and bans coming into effect across the country, outreach campaigns help the public understand the reasoning behind these regulations that will be critical to bringing about lasting change. 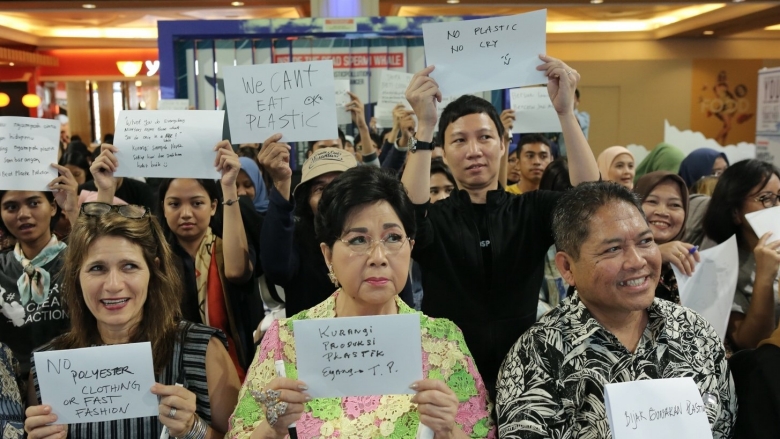 Working with Communities: Beyond strengthening policies and focusing on urban populations, ISOP’s forthcoming Oceans for Prosperity Program will focus on helping Indonesia’s thousands of fishing communities deal with the immediate impacts of plastic on their daily livelihoods. Plastic severely affects fish populations and the quality of fish caught, decreasing the sector’s productivity, threatening a US$ 26.9 billion-dollar industry (2.6% of GDP) of the world’s second-largest fisheries producers, and risking over seven million jobs. Oceans for Prosperity will fund ghost net retrieval, cost-effective clean-up technologies, and improve waste management in fishing ports.

By taking an integrated approach to project management, tackling marine plastic from various angles, and sharing knowledge, data and resources, the World Bank’s ISOP is supporting the government’s steady progress in freeing waterways and coastal areas from pollution so that Indonesia can turn the tide on marine plastics.