Hundreds of beautiful wood sculptures — from elephants, horses and birds to Buddha images and human characters — are on display at the Vorachith Wood Carving showroom in Phailom Village, an hour’s drive from Vientiane, capital of the Lao People’s Democratic Republic (Lao PDR). These sculptures bring life to reclaimed wood sourced from dead stumps or fallen trees and showcase the art of their creator, 44-year-old Vorachith Keoxayavong. 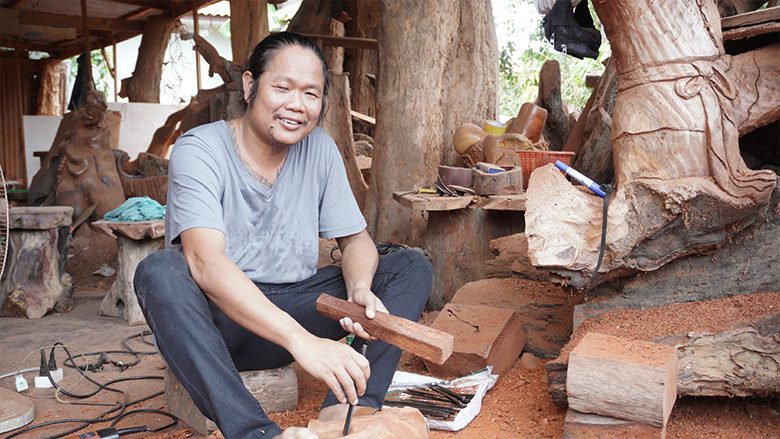 Mr. Vorachith is one of many sculptors in Ban Phailom, where turning dead wood into works of art has become a local specialty. “I’ve been sculpting wood since I was a kid,” he explains. “Phailom is a village of wood sculptors, where people have long practiced their skills and passed them down to their children.”

According to Mr. Vorachith, for his parents’ generation wood carving was a side job, a hobby that could earn a little extra money occasionally. However, Laos has in recent times been promoting small businesses as vital to economic growth. According to the Lao Economic Monitor of August 2019, small and medium-sized enterprises (SMEs) account for about 99 percent of all registered firms and over 80 percent of employment. However, they contribute less than 20 percent of the country’s GDP, compared with about 40 percent in Thailand, and 32 percent in Malaysia and the Philippines.

One of the reasons for the relatively slow growth of small firms in Lao PDR has been the difficulty of obtaining working capital at affordable rates. According to statistics from the Bank of the Lao PDR in 2016, only about 20 percent of SMEs were able to access bank loans. Lending for short- and medium-term projects usually comes with high interest rates, and many SMEs do not have the assets required by banks as collateral for loans.

To boost growth and innovation among SMEs and help them thrive as the backbone of the economy, the Ministry of Industry and Commerce requested World Bank funding. In 2014, the World Bank approved the SME Access to Finance Project, which now provides medium- and long-term funding sources to businesses across the country.

In 2013 the Phailom Woodcarvers’ Group, a group of 12 artisanal workshops, was awarded certification under the Lao government’s One District One Product scheme, which encourages local traditions on a commercial basis. The group provides jobs for over 200 villagers but until recently had struggled to gain a wide market that could help it further develop.

Vorachith Wood Carving is one of the group members, employing 23 people and producing sculptures, which are mostly sold to foreign tourists. According to Mr. Vorachit, he and the village’s other wood carvers needed business capital to grow. “These are craft products with no set market price,” he says. “The selling price depends on a client’s appreciation and satisfaction.” With business capital, the sculptors could show their products to a wider range of clients and so start to earn higher returns on their labor.

In April 2019, Vorachith took a four-year loan for 400 million kip ($44,000) from one of the four commercial banks participating in the project, at an interest rate of 7%. This enabled him to expand both his showroom and production area. “In the past, expanding was tough as we had to take out informal loans with very high interest rates. I feel much more at ease borrowing money from a bank,” he says.

By June 2020, 177 SMEs had accessed loans through the project, of which 77 were microenterprises with 1-5 employees, 96 were small (6-50 employees), and 4 were medium-sized enterprises (51-99 employees). Almost 60 percent of the firms are headed by women. Many types of business have taken advantage of the opportunity, including construction equipment suppliers, tailors, clothing shops, and electrical supply stores. 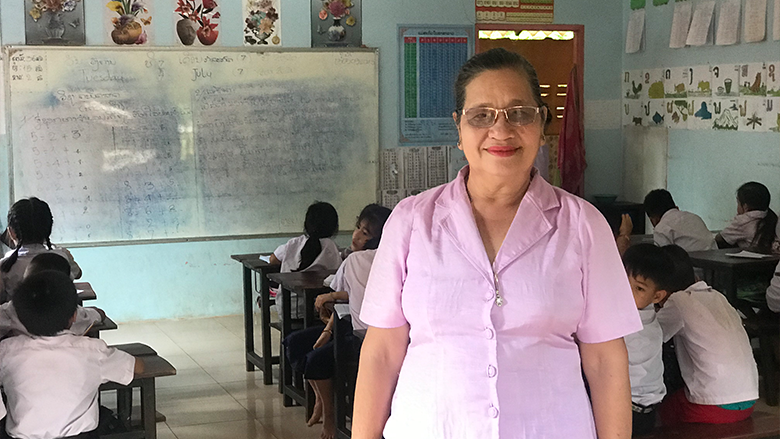 Sivilay Chaleunaloun, a teacher, took a loan of 120 million kip ($13,200) to expand a private school she set up after retiring from state schools. Her school now offers early childhood, kindergarten, and primary classes, employing 17 teachers. “This is the biggest loan I’ve ever taken,” says Mrs. Sivilay, “and it helps to improve the school by adding more classes and creating a better environment. This will bring more students and eventually more income.” 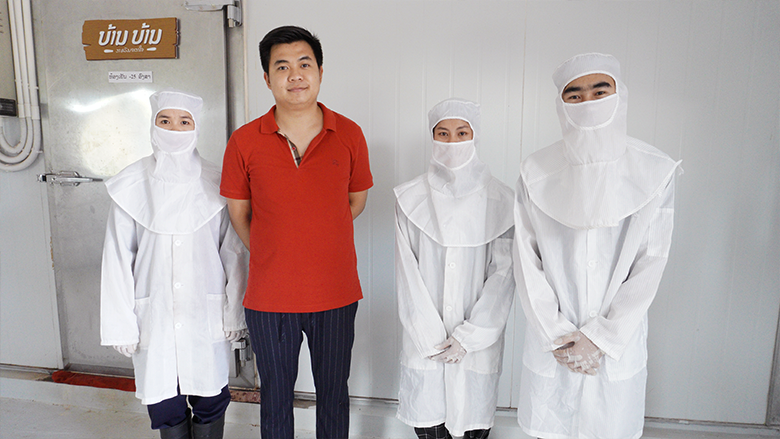 Mr. Anan Thongsavath, a young entrepreneur, had been selling homemade ice cream for four years in Vientiane but wanted to reach more consumers and lower his prices. He came up with the idea of making ice cream sticks and, with a project loan, created Ban Ban Ice Cream in 2019. Ban Ban has grown from 4 staff to 22 and has placed freezers at 220 outlets. According to Mr. Anan, the project loan has helped him to better manage cash flows and he is confident the business can grow faster.

Unfortunately, many of the recent gains made by small businesses in Lao PDR have been jeopardized by the effects of the COVID-19 pandemic. Lockdowns and restrictions introduced to protect people from the virus have had significant adverse effects on SMEs, including disrupted supply chains and a reduction in income. According to a survey by the Lao National Chamber of Commerce and Industry, more than three-quarters of respondents reported a drop of at least 20% in revenues during the first quarter of 2020, compared to the same period in 2019.

Travel restrictions have drastically reduced the influx of foreign tourism in Lao PDR, and Vorachit’s business has suffered significant losses. “Most of my customers are from neighboring countries, and I have had to cut staff salaries,” he says.

The World Bank is now working with the Lao government on potential ways to help small companies weather the effects of the pandemic and get their firms back on solid financial ground as restrictions are gradually lifted.

Entrepreneurs such as Mr. Vorachith may save their businesses and thousands of jobs as a result. “My factory provides jobs for 23 people from the village”, emphasizes Vorachith, “and these people have to take care of their family members. I cannot let this business die, but will continue to fulfil my dream, and to support my family and community.”