A recipe for a more equitable and efficient learning system 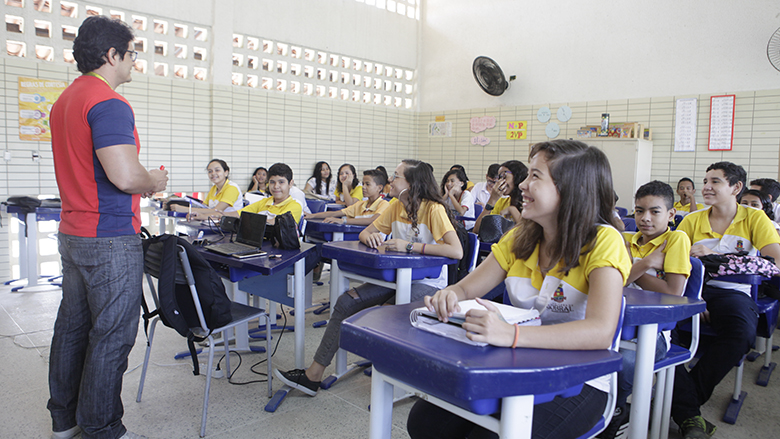 Several key changes were made. The amendment increased from 10% to 23% the amount in which the federal government contributes to the fund. It is estimated that the funding will increase to R$ 17.5 billion (US$ 350 million) in 2021 and reach R  39.3 billion (US$786 million) in 2026. Another change is that the resources are now transferred directly to the poorest municipalities – instead of states – turning education investments more equitable.

It also associates part of the national transfers linked to education outcomes and makes mandatory to all states to implement a results-based mechanism to incentivize education outcomes of their respective municipalities. This aspect of the reform was inspired by a pioneering experience in the Northeastern State of Ceará that has been proven as a good response to overcome learning poverty - the inability to read and understand a simple text at the age of ten.

Such constitutional amendment is particularly timing, even more in the context of the COVID-19 education crisis. Currently, around 48 million Brazilian students from public and private schools are deprived from presential classes. And only five of the Brazilian 27 states are providing internet access to the public school students. The new Fundeb model might help the states to close post-pandemic educational gaps.

There are good reasons to use the case of Ceará in Fundeb as a solid example of a successful educational system. In just over a decade, Ceará improved the quality of education much faster than any part of Brazil by implementing a set of reforms.

The state introduced a results-based financing model that included strong support to municipalities with lower technical capacity in order to achieve equitable and universal literacy by the end of grade 2. These reforms allowed the state to considerably improve learning levels of students in primary and lower secondary education with a high level of efficiency in the use of resources. The state had about 1.2 million students enrolled in municipal schools at primary and lower secondary levels at the time of the reforms began. Now it has about 900,000.

A vision from the experts

Many education experts coincided that the Ceará´s approach has proved to be efficient and replicable for the rest of the country and Latin American region.

“The municipalities of Ceará had the biggest increase in education quality, as measured by Brazil’s Basic Education Development Index (IDEB), between 2005 and 2017. Almost all of the 184 Ceará municipalities initially had very low levels of quality in teaching and very limited resources, investing about a third of the per student education spending of wealthier Brazilian states, such as São Paulo”, explained André Loureiro, Senior Economist and coordinator of the report The State of Ceara in Brazil is a Role Model for Reducing Learning Poverty , that brings an in-depth scrutiny at the state’s education reform.

“At a fundamental level, what municipal schools in Ceará have accomplished is firmly grounded in insights from the Science of Learning, which emphasize three key principles: first, that learning needs to happen with joy, rigor and purpose; second, that improvement requires readiness, opportunities and incentives to get better; and third, that sustained performance improvement requires constant and focused feedback. Sobral, first, and then Ceará in the following have embraced these principles in the day-to-day practices and interactions of students, teachers, principals and even district officials in classrooms and schools”, said Omar Arias, Manager for the World Bank Global Engagement and Knowledge.

Five pillars sustain the Ceará education model . The two core pillars are a system of incentives created by the state government for municipalities tied to better education outcomes; and technical support to municipal school networks struggling to improve learning goals, with a focus on enhancing teacher effectiveness.

These strategies were only possible with sustained political leadership, a robust and reliable monitoring and evaluation system in education to identify municipalities that needed more support,  and the delegation of primary and lower secondary schools to the municipal governments providing high degree of autonomy to design and implement their education policies (the three other pillars).

“All five pillars are critical and interdependent, including the financial incentives and technical assistance pillars,” said Emanuela Di Gropello , Education Practice Manager at the World Bank in Latin America.

The transformation was soon noticed. Students from Ceará have better literacy and numeracy scores in Brazil when graduating from primary education. “Today Ceará has the lowest rates of learning poverty in Brazil. Moreover, the outstanding educational results of Ceará students are well above what would be expected given the socioeconomic context in which they live and learn,” added Di Gropello.

In a time when the reformulation of the educational system is necessary due to the Covid-19 pandemic, the Ceará education model can provide a formidable  example to all countries that wish to rebuild better education systems than before by aiming to eradicate learning poverty and fostering human capital.