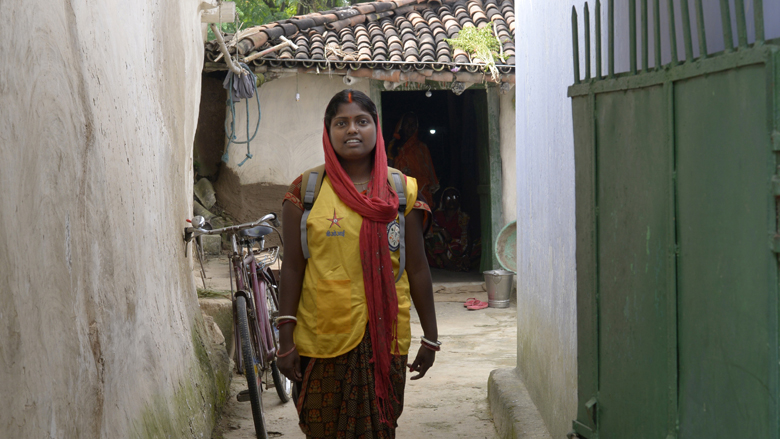 Bank sakhis– or bank correspondents have been trained to provide basic banking services in rural India.

In this remote village in Bihar’s Aurangabad district, Bandhini Kumari has never been so busy. Since the morning, women have been lining up outside her tiny roadside stall to withdraw the money the government is crediting into their bank accounts to help them tide over the Covid crisis.

As a bank sakhi – or female banker friend – Bandhini has been providing basic banking services in her village for the past two years. But she hasn’t seen such a rush before. “Even those who hardly ever operated their accounts are now coming forward to withdraw this money. I deal with 50-80 people every day,” she says.

Women like Bandhini have proved to be a lifeline in these extraordinary times. Without them, poor rural women would have found it extremely difficult to access the government’s relief package of Rs 500 per month that is being provided to them during the crisis. The government too would have found it daunting to reach relief money to 206 million women in far-flung corners of the country who are eligible for these benefits.

Since the onset of the pandemic, Bandhini wakes up at 4.30 every morning to finish the housework before setting out to meet the needs of her customers. She chalks out circles six feet apart to ensure they maintain social distancing, wears a mask and gloves, and sanitizes the devices she uses, including her micro-ATM machine, laptop and scanner.

While the average value of each transaction may have fallen – in line with the slowing down of the economy – nearly 750,000 transactions worth some $40 million were completed by some 6,000 bank sakhis in 12 Indian states in the month of February 2020 alone. This was 70,000 more than the month before.

The idea of banking agents - ‘barefoot bankers’ in a sense - was first mooted.

In 2014, the government launched the Pradhan Mantri Jan Dhan Yojana (PMJDY) - a nationwide drive to bring the poor and vulnerable into the banking fold. Given this massive push for financial inclusion, almost 400 million PMJDY bank accounts were opened by May 2020. More than half of these accounts belonged to women.

Initially, however, most of these accounts remained inactive. Less than 10 percent of India’s 650,000 villages had a branch of a bank, leaving account holders with no option but to walk for miles, or pay for transport to reach the nearest banking facility. What’s more, some customers were illiterate, while some could just about sign their names, making it a nightmare to complete the bank’s paperwork. On the other hand, most banking correspondents who visited their villages were men, and the women hesitated to deal with them. To add to that, the rates of attrition among male agents were high.

In 2015-16, India’s National Rural Livelihoods Mission (NRLM) – with support from the World Bank – sought to address the issue by piloting a new female-led model that employed self-help-group (SHG) women as banking correspondents in the villages. The pilot built on the success of the country’s 7 million plus women’s SHGs, which had emerged as significant grassroots institutions of the poor.

The advent of the biometric-based unique identification numbers (Aadhaar) gave a further boost to financial inclusion. “The linking of Aadhar UIDs with PMJDY bank accounts proved to be a game changer as customers can now carry out banking transactions through any BC agent, anywhere in the country,” explained Trivikram, National Mission Manager for Financial Inclusion, driving the government’s SHG-BC program under NRLM.

Moreover, the government can now channel benefits directly into the bank accounts of the poor, enabling widows to withdraw pensions, students to access scholarship money, and workers to receive earnings under cash for work programs etc. without stirring out of their homes.

"Exposure to the outside world has given me so much confidence. There is no looking back."
Bandhini
Bank Sakhi 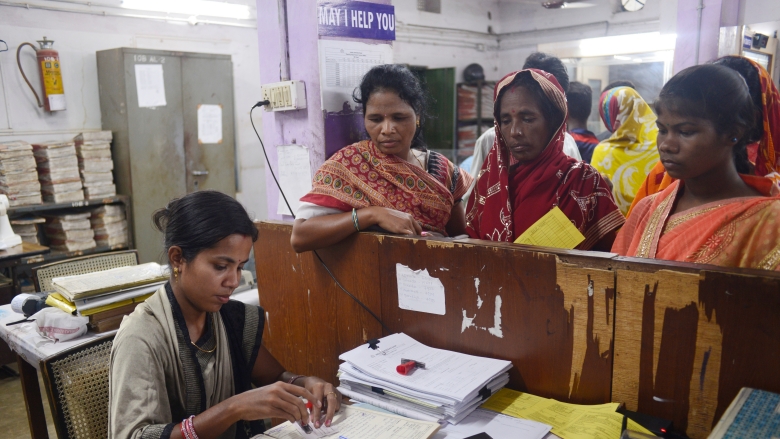 As members of local SHGs, bank sakhis enjoy the trust of their communities. Besides, they can visit women customers at their homes – something the men can’t do.

“The bank sakhis work well because they belong to the villages where they work,” added Alreena Pinto, who leads the data analytics for the World Bank program. “As members of local SHGs, they enjoy the trust of their communities. Besides, they can visit women customers at their homes – something the men can’t do.”

“Because we stay in the village, our customers can even withdraw money during festivals and holidays,” said Nisha Devi, a bank sakhi from Gumla district in Jharkhand. “They can save more easily too as they no longer have to go long distances to deposit small sums.” It is no surprise then that women banking correspondents are out-performing their male counterparts in many places.

The system has also opened up new opportunities for local women to earn. And

The employment of women banking correspondents has also had a significant social impact in rural India. The recognition and respect the bank sakhis receive, both at home and within their communities, is overturning patriarchal mindsets, breaking down the rigidities of the caste system, and giving the women a huge sense of empowerment.

“Exposure to the outside world has given me so much confidence,” says Bandhini, who has become a role model for local girls. “There is no looking back.”

Given the success of the pilot, the This will not only help digitize rural banking transactions but also create a host of rural women entrepreneurs!