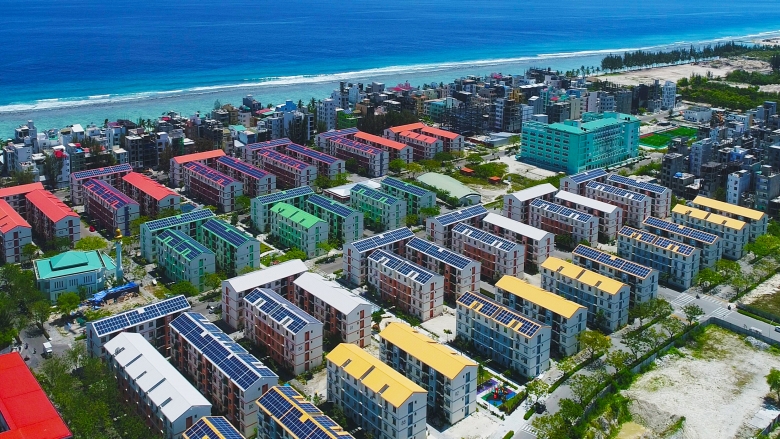 Scaling up renewable energy generation in Maldives can contribute to post COVID-19 economic recovery and create more jobs for Maldivians.

As in the rest of the world, the year 2020 is unlike anything the Maldives has ever seen before. The unprecedented economic crisis caused by the COVID-19 pandemic has highlighted the vulnerabilities of the country’s economic model. The high growth years, when rising tourism revenues, record volumes of foreign direct investment and sizeable external borrowings helped the country embark on large scale infrastructure projects, have come to an abrupt end.

Tourism, the mainstay of the island nation’s economy and a major source of livelihoods for both Maldivians and foreign workers, is at a standstill. Construction and fisheries – the other drivers of the economy - have not been spared either. Fishermen who sell their catch to resorts are scrambling to find alternative markets. Photographers can no longer find moments to capture and the guitars and drums of local musicians lie idle.

The World Bank’s Maldives Development Update (MDU) analyses recent developments and presents its outlook on the Maldivian economy. It finds that while the government is trying to soften the blow on businesses and workers through a fiscal package, the economic impact on the country is expected to be profound and the outlook uncertain.

Recovery depends on how fast the Maldives’ lucrative tourism industry bounces back. With borders expected to reopen to visitors in July, some tourism may return in time for the year-end high season. But recovery may be slower than after previous crises; the recent decline in tourist arrivals has been far greater than in the aftermath of the September 2001 terrorist attacks or the December 2004 Indian Ocean tsunami.

“A slow but steady recovery awaits the Maldives in the months and years ahead,” said Florian Blum, lead author of the MDU. In this regard, Pui Shen Yoong, co-author of the report, pointed out to the unique characteristics of the Maldives tourist industry that the island nation could turn to its advantage:

"Despite the uncertainty, the country’s ‘one-island, one-resort’ set up that facilitates social distancing can enhance its ability to recover from the crisis." 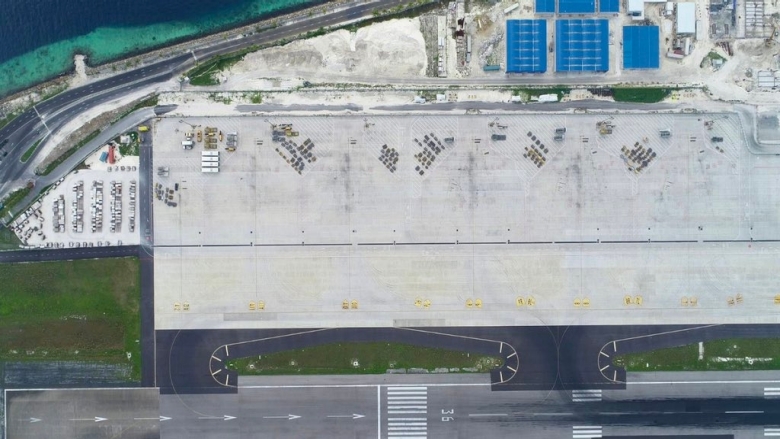 Vacant airport runway; tourism, the main driver of the Maldivian economy, has come to a halt.

The .  It says that the current pandemic will end, but global warming and climate change will still loom large on the horizon. These are likely to create further disasters that not only destroy livelihoods and property, but also lead to warmer seas that cause coral bleaching and kill marine life, threatening the foundations of the crucial tourist industry and the nation’s very survival.

The report examines the high cost of providing electricity to the archipelago’s 200 or so inhabited islands. While the Maldives is to be credited for becoming the first South Asian country to achieve universal electrification – a feather in the cap for one of the world’s most geographically dispersed countries – the country has paid a heavy price to accomplish this.

Today, the Maldives is almost completely dependent on fossil fuels - mostly diesel – to power the independent electricity grids on its islands. The burning of fossil fuels has not only become a major source of pollution but also generates 94 percent of the country’s emissions, contributing to a carbon footprint that is significantly higher than the South Asian average. What’s more, the import of these fuels accounts for almost a fifth of the country’s imports, burning a hole in the country’s budget. And while the Maldivian people have access to electricity, power tariffs in the country are among the highest in the region, even with government subsidies.

Given the country’s ever-increasing demand for electricity, the government is aiming to raise the share of renewable energy in the national energy mix by 20 percent by 2023 and ramp it up to 70 percent by 2030.

Corresponding with the government’s targets, the MDU presents two scenarios. It points out that investments of up to $300 million will be needed to realize the government’s first target for 2023, with a further investment of $1 billion to achieve the 2030 target. Despite these high investment costs, the report suggests that by 2043, benefits can outweigh costs. And, apart from reducing air pollution and carbon emissions, a , especially for women.

#Maldives depends on tourism for revenues, making them more vulnerable to #COVID19 than any other in South Asia. The new @WorldBank Maldives Development Update looks at how the economy has been affected – and how it is expected to recover: https://t.co/MK2sQ8z6ot #MDU2020 pic.twitter.com/WLINfrvyRR

The report emphasizes that the high investment costs to finance a renewable energy transition need not be met by the government alone. Instead, clever policy design can generate win-win situations that encourage private investment in solar panels through power purchase agreements and feed-in-tariffs. Such arrangements present the private sector with a lucrative and comparatively low-risk opportunity for investment, leveraging private capital for cheaper and more environmentally friendly energy generation.

“As the Maldives moves from the ‘relief’ to the ‘recovery’ stage of policy measures, ,” explained Florian Blum. “Clean energy investments may also help the Maldivian economy rebound more strongly.”