As Haiti Braces for the COVID-19 Pandemic, Water, Sanitation, and Hygiene Are More Important Than Ever

With support from the World Bank-financed Sustainable Rural and Small Towns Water and Sanitation Project, the Regional Water Supply and Sanitation Office (OREPA) in Haiti launched a large-scale public awareness campaign, which promoted good handwashing behavior, hygiene, physical distancing, and the use of face masks using posters, videos, social media messages, radio announcements, and recordings broadcasted from cars and motorbikes.Special thanks to our volunteers who helped produce this animation to raise awareness around protection again COVID-19 in Haiti and other countries around the world.

In the 10 years since the devastating earthquake struck Haiti, the country battled a cholera epidemic, which is now under control, with no cases since January 2019. Now, with the coronavirus (COVID-19) beginning to spread, Haiti is bracing for a new pandemic.

Haiti’s first confirmed case of COVID-19 came on March 19, prompting the government to declare a state of emergency. Two months later, the transmission is still in the early stages with the number of confirmed cases just passing 1000, compared to other countries. However, with a weak health system and millions of people lacking access to clean water, urgent action, closely coordinated with the health sector, is needed to bolster water, sanitation, and hygiene (WASH) services to help prevent further spread. 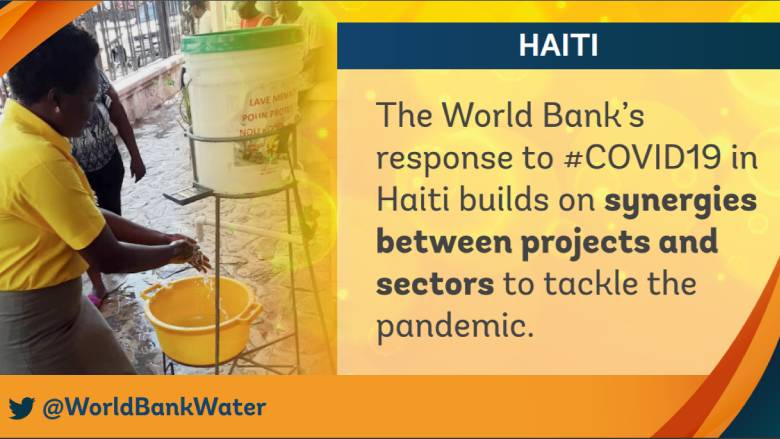 In terms of water and sanitation infrastructure, Haiti is the most underserved country in the Americas.  The situation became even more critical after the 2010 earthquake destroyed much of the existing infrastructure.  Between 1990 and 2015, the share of the population with access to potable water decreased from 62% to 52%.  Today, more than half of the country’s rural population still lacks access to drinkable water, while only about one-third of Haitians have access to basic sanitation. Since handwashing with soap is one of the most effective weapons against the novel coronavirus, a focus on WASH is essential.

See more of the campaign materials.

In partnership with UNICEF, on March 25, the project financed two programs to install 390 handwashing stations at critical locations, including in markets, orphanages, prisons, and health care centers. Work is ongoing to bring improved access to water, sanitation, and hygiene facilities to women, children, and vulnerable populations in three poor communes, Terre-Neuve, Anse Rouge, and Lascahobas. Over 68,000 people will gain access to sanitation facilities, while 9,250 people will benefit from safe drinking water thanks to improved infrastructure. 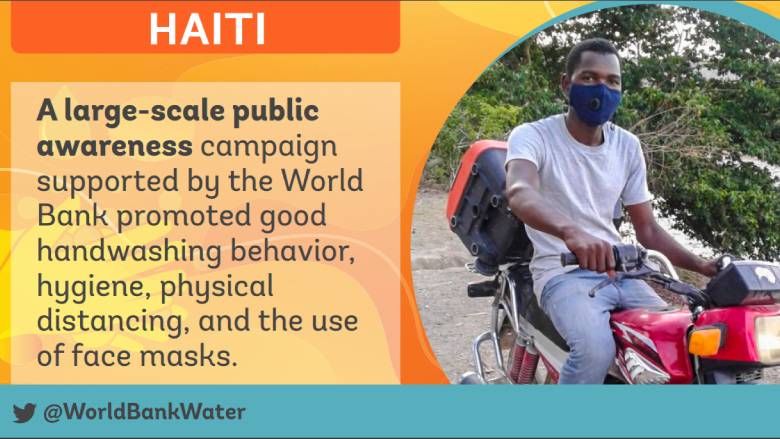 All too often in Haiti, WASH services are lacking even in the places where people go to seek medical treatment. Hence soap, sanitizing materials, and face masks have been distributed to frontline workers across the country. Meanwhile, construction and rehabilitation of WASH infrastructure in health centers, a COVID-19 screening center near the border with the Dominican Republic, and treatment zones have been a priority, with work focusing on 30 health centers, 10 hospitals, and two laboratories. In the areas hit hardest by the pandemic, four additional rapid response teams have been mobilized to ensure contact tracing and step up awareness-raising campaigns. 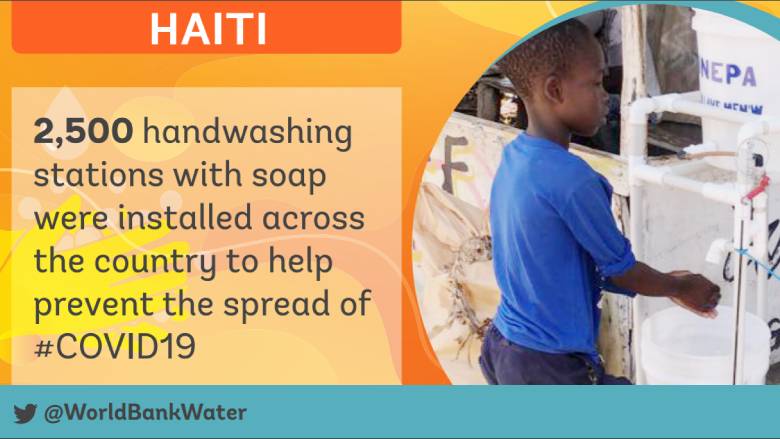 On April 2, the World Bank approved a US$20 million grant for the Haiti COVID-19 Emergency Recovery and Response Project, which aims to limit the transmission of the virus through detection, infection control in health care facilities, and access to the best possible care for people who become ill.

Looking forward, it will be important not only to help the country through the current situation but also to build a foundation to help sustain WASH access in the future. To support ongoing data collection on WASH services and locations of handwashing points across Haiti, a database has been created in close collaboration with DINEPA and OREPA. 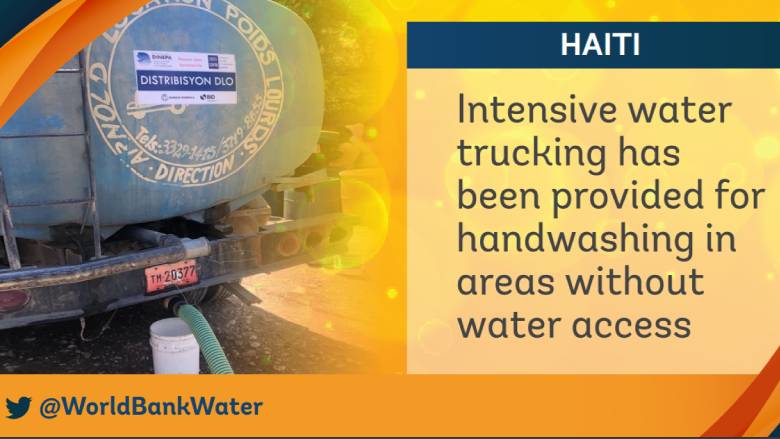 The challenges and hardships imposed by COVID-19 have required stronger than ever collaboration between the health and water sectors to upgrade water and sanitation facilities across the country.  The hope is that this move will help contain the pandemic  and improve the health and living conditions of Haitians going forward.

The Global Water Security and Sanitation Partnership (GWSP) is supporting Haiti as a priority country, where some of its most innovative interventions and approaches are tested, refined and scaled-up.