Skip to Main Navigation
This page in:_
FEATURE STORY March 22, 2020 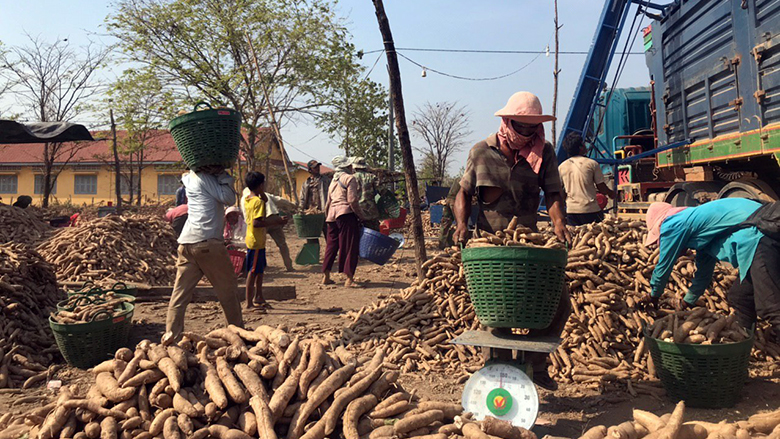 A 39-year-old farmer, Thy Thea, expressed his appreciation to have a farming contract with a private company for his organic products. This year, he harvested 32 tons (worth about US$3,000) of his organic cassava that he grows between his organic cashew nut trees on his two hectares of farm land. He also expects to gain more from his cashew trees, which will be harvested soon.

“I have no worry about markets for my organic products,” Thea said, referring to a farming contract that his Agricultural Cooperative (AC) has signed with the Cambodian Agriculture Cooperative Corporation, Plc. (CACC). “When our product is ready to harvest, the company comes to our village and buys it. Unlike before, we had to bring it on our own to middle businessmen located far away from our village.”

Thea’s neighbor, Ieng Phang, 40, earned more than US$3,300 from her 34 tons of organic cassava this year. Because of better earnings this year, she has signed a new contract to grow organic cassava again next season. She observed that more families in her community want to join the scheme.

“I encourage my neighbors to join the agriculture cooperative because we can earn more and our health is safe,” she said.

"I encourage my neighbors to join the agriculture cooperative because we can earn more and our health is safe."
Ieng Phang
a 40-year-old farmer

Thea and Phang are members of Agriculture Cooperative in Tipo Commune in Kampong Thom province. They are among the formerly landless and land-poor families who received land and livelihood support from the Land Allocation for Social and Economic Development Project II (LASED II). The project is supported by the World Bank and German International Cooperation (GIZ).

That Phalit, Deputy Program Manager of GIZ, said that to get private companies to sign farm contracts for organic products, GIZ helps the cooperatives get organically certified from the Control Union Certifications Production Standards and Regulation of the European Union and the U.S. National Organic Program.

A villager in Da commune, a LASED II project site in Kratie province, Khun Malis, 31, harvested more than eight tons of her organic cassava from her nearly one hectare of farm land. Through the agricultural cooperative, she can sell her yield at double the price she used to get from middlemen buyers.

She added that a guaranteed price and improved cassava productivity have attracted more families to join the cooperative. This year, number of members has increased from 25 families to 72 families and many more families will soon join.

The production of organic cassava for this year has not reached the target, even though more and more families are joining the cooperatives. What’s needed to boost output, according to Kann Kunthy, Managing Director of CCAC who signed the farm contracts with cooperatives under the LASED II project, is improved soil and seed and better coordination among cooperative members.

Dr. Dok Doma, Project Director of LASED II, is committed to supporting and strengthening the cooperatives in order to improve organic cassava productivity and encourage even more project beneficiaries to join the scheme.  “Now we have put more efforts to help them increase their organic productivity by providing farming technics, including climate-smart agricultural practices, and providing revolving fund so they can use it to improve seed and soil.” he said.