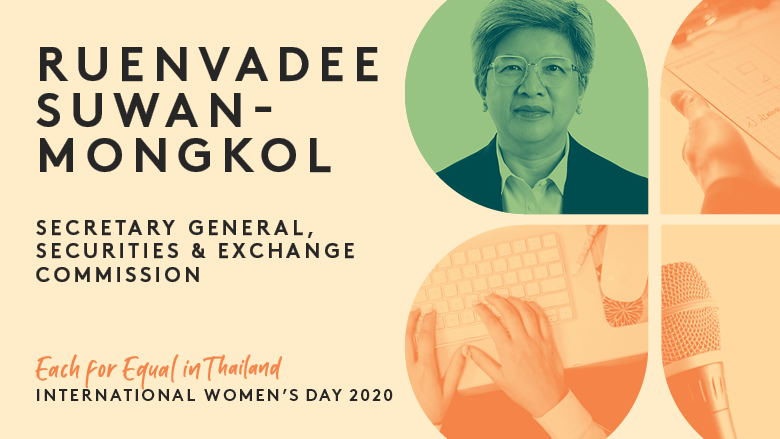 For International Women’s Day 2020, we’re getting to know the pioneering women across East Asia who are breaking barriers and creating change for the decade ahead. Ruenvadee Suwanmongkol's trust, dedication, teamwork, and respect were key in her over 30 years of career in the public and private sectors. Named ‘The Best Working Women in 2017’. Meet Ruenvadee.

My name is Ruenvadee Suwanmongkol.  I grew up in a warm close-knit family and community from Pattani Province, one of the deep south provinces in Thailand.  Thanks to my open-minded parents, I was given an opportunity to freely choose to learn and to work in the area that I prefer, since they cherished education and told me that it would be my greatest asset in the future.

The most important lessons my parents imprinted on me, and were an excellent example themselves, is to be humble, caring, honest, and public-minded. They sent my sister and I to Rajinibon School, a secondary school in Bangkok, which emphasizes both academic and traditional value of Thai culture. I was taught to not be afraid of experimenting, trying and failing. I feel very privileged to be a child of my parents who shaped me into who I am now. I am deeply grateful to them.

In terms of my career, I have been taking various responsibilities during my 30 years of work both in public and private sectors. I have realized that the key factors to success are trust, adaptation to change, dedication, commitment, contribution, teamwork, proactiveness, trial and error, and respect.

Being a woman, I have worked as hard as a male colleague and never feel any disadvantage. I feel that as a woman, I can give a more human touch, especially care and concern to my teams and colleagues.
I am very honored that when I was a Director-General at the Department of Legal Enforcement at the Ministry of Justice, the Ministry of Labor named me “The Best Working Women 2017” from the public sector on International Women’s Day.

My parents have inspired me the most.

How do you see Thai Women Breaking Barriers?  What does that mean to you?

Thailand is an open society.  In the history, there were many great Thai heroines who helped defend their cities and developed the country.  A Thai idiom says, “The husband is the fore leg of the elephant, the wife is the hind leg.”  This saying confirms the recognition of the Thai woman as the hind legs of the elephant, which are used for acceleration while the front legs are used more for braking.

In terms of a legal recognition of gender equality, the first Constitution of the Kingdom of Thailand 1933, Thai women were given the same voting right as men.  Thailand, then, was one of the first Asian countries to give women the right to vote.  The current Constitution prescribes clearly that men and women shall enjoy equal rights.

We recognize the increasing role of Thai women in the workforce and economy.  According to research from Grant Thornton International (2019), women in Thailand hold 33% of all CEO and Managing Director jobs in the private sector, which is double the world average and higher than any other country in Southeast Asia.

In the area of capital markets, the progress we have made for the role of Thai women is strong and substantial. Over the past years, we have witnessed an increasing number of female directors of listed companies.  According to the 2019 Corporate Governance Report, out of 677 listed companies, there were 6,603 directors in total, and 20% or 1,313 of them are women.  In addition, there were 17.5 million female workers in Thailand’s labor force – an increase from 17.1 million in 2017.  The gender gap between male and female has also decreased from 10% to 8%.

I am very pleased to see this increase in the role of Thai women in the work force.  For myself, I was appointed as the first woman as the Secretary-General of the Thai Securities and Exchange Commission (SEC) since its inception in 1992.

“Do not fear failure but rather fear not trying.” By Roy T. Bennett

Where do you see Thailand and women in 25 years?

Thailand will achieve the Sustainable Development Goals (SDGs), and Goal 5 on Gender Equality in particular.  To achieve SDG 5 Thailand has incorporated the universal values under the Convention on the Elimination of All Forms of Discrimination Against Women (CEDAW) and the Beijing Declaration and Platform of Action into its Women Development Strategy (2017-2021). This strategy aims to “create social equality without discrimination for women to have good quality of life, be safe and secure.” An action plan is being implemented to empower, increase participation and improve livelihoods of all Thai women.

I do hope that Thai women will be given wider access to economic resources and financial services and capital market for funding the businesses.  Also, financial literacy and digital literacy shall be provided to both girls and Thai women so that they will be equipped to use digital tools and other technologies for better efficiency and effectiveness.  Girls and women with poor digital literacy skills will be the hardest hit and will struggle to find jobs as technology advances.

I am certain that in 25 years, we will see a stronger foundation and more achievements contributed by both private and public sectors. Collective action and shared responsibility are key elements to accelerate gender equality.

What do you think is needed in Thailand for more equality between men and women? (#EachForEqual)

In my opinion, it is the strong collaboration from both public and private sectors to implement the Women Development Strategy, the 20-year National Strategy, and the Sustainable Development Goals.  Government or public sector cannot do it alone. To give an example, the Ministry of Social Development and Human Security just organized a Declaration of Commitment Ceremony to promote gender equality and eliminate discrimination with 24 public and private sector entities and universities as signatories.  I was so pleased to attend on behalf of the SEC and see this strong commitment to promote gender equality and eliminate discrimination at the SEC.

If you could use one word to describe women in Thailand what would it be?

What is your big hope for Thai women in the future?

My big hope is that Thai women will be able to cope with new challenges and adjust or adapt themselves in an uncertain and fast-changing world marked by strong technology disruption.