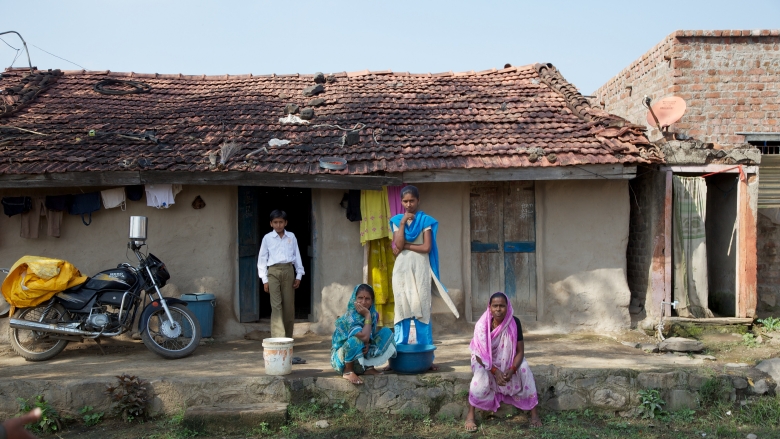 A family from Bhagurdi village in Maharashtra, India

A steady, safe, well-paid job is the best protection against economic hardship.  But when this ideal situation is not possible, social protection programs help people become more resilient to the risks they face. Of late, there is growing enthusiasm for basic income support as a core tool for social protection in India. But income transfers cannot prepare or insure people against all shocks. Typically, a comprehensive social protection system requires three types of instruments to work together:

When social protection schemes were created in India after independence, most of the country was reeling from a period of famine, de-industrialization and multiple deprivations. Half the population was chronically poor, the country had an aggregate food deficit, financial and banking networks were under-developed, growth rates were weak and technology available for program administration was rudimentary. Therefore, India’s policy makers focused almost exclusively on anti-poverty, protective instruments. But that India no longer exists, and the country’s social protection system needs to evolve and catch up with the needs of its new demography and risk profile.

Three stylized facts are important to guide this evolution:

"It’s critical that programs help those vulnerable to poverty to anticipate and manage risks and shocks better through portable tools prevent them from falling back into poverty– health insurance, social insurance (in case of death, accident and other calamities) and pensions."

For example, in 2016, a traditional safety net such as the Public Distribution System (PDS) expended sixteen billion dollars, the life and accident insurance programs spent less than sixteen million dollars together. While there has been a marked expansion in social insurance programs and coverage, revised expenditure estimates for 2018-2019 show that programs such as the PDS still constitute 38% of social protection spending in the country, compared to less than 1% of the social protection budget being spent on health insurance.

It’s critical that programs help those vulnerable to poverty to anticipate and manage risks and shocks better, not only attempt to provide aid to relieve deprivations experienced by the poor. Portability is key to ensure migrants receive support while they try to build new lives in new places, as state governments often use residency criteria to target benefits.

Recent policies have taken steps in the right direction. The boost in crop insurance, new pension plans for the elderly, new contributory pension schemes for those who have the wherewithal to save, and larger coverage of health insurance programs will help India re-balance its social protection architecture to match the needs of the rising numbers of its vulnerable people.

Given the huge diversity in the economic profile of India’s states, a variety of approaches will be called for. For instance, the needs of the rising middle-class with access to private insurance markets in Delhi and Maharashtra will differ markedly from the needs of poorer states such as Uttar Pradesh and Bihar. Delhi should be enabled to spend its centrally allocated social protection resources differently from Uttar Pradesh. In states where many poor and vulnerable households are still not able to save enough to insure themselves against crises or times of high prices, social assistance will remain a core intervention.  In low income states, traditional anti-poverty programs such as PDS or MGNREGS, if implemented well, can serve twin goals of protection and prevention by ensuring India’s vulnerable don’t become poor and that the poor live with dignity during times of drought or food price inflation. Effective safety nets can dramatically reduce the number of poor and the likelihood that poverty will be transmitted from one generation to the next.  Strengthening their delivery systems is key, while allowing state governments to choose the optimal mix of preventive and protective programs to suit their state’s needs within an umbrella social protection budget.

If insurance coverage is adequate and expands, many families would not need to rely on safety net transfers in the face of old age or health crises which would otherwise push households into long term poverty and debt traps. Thus, an increased emphasis on interventions that help anticipate risks should be expected, particularly in medium- and high-growth states.

In 2019, India is no longer a largely chronically poor country but a more unequal and vulnerable country with pockets of deep poverty. India’s future shared prosperity will depend to a large extent on how its social protection system evolves and catches up with its diversity and demography.