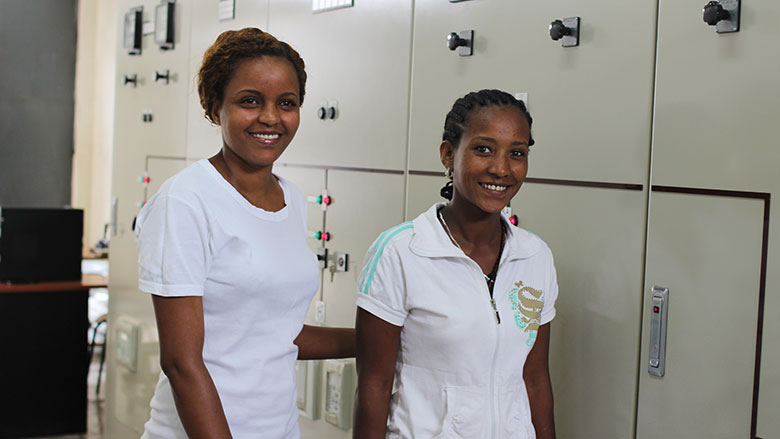 The Ethiopia Electrification Program aims to create more equitable energy institutions, starting with helping the Ethiopia Electric Utility (EEU) achieve a better balance of men and women among leadership and in its workforce.

ADDIS ABABA, May 3, 2019 – With the appointment of Sahle-Work Zewde as first female president, and the creation of a gender-balanced cabinet, Ethiopia is attracting global attention for efforts to promote gender equality. This is against a backdrop of some of the lowest gender equality performance indicators in Sub-Saharan Africa. Gaps between men and women are especially prevalent in infrastructure sectors such as energy, where the roles and responsibilities of women and girls in the household, market, and community can affect their access, control, and use of electricity services.

This involves shifting from ad-hoc and disconnected interventions to a programmatic approach with investments in technical staff, and an earmarked budget to support gender equality across the entire energy sector.

The $375 million Ethiopia Electrification Program (ELEAP) is one of the largest and most ambitious electrification programs the World Bank has undertaken in Africa. The program focuses on creating more equitable energy institutions, starting with helping the Ethiopia Electric Utility (EEU) achieve a better balance between men and women among leadership and in its workforce. Currently women make up just 20% of the workforce, and even less in technical roles.

“It is an historic moment for Ethiopia, for the Ethiopia Electric Utility as well as the World Bank,” said EEU Chief Executive Officer Ato Shiferaw Telila. “The gaps in management roles and decision-making cannot remain.”

The coordinated approach between the Bank Group and Ethiopia includes deep engagement with energy experts, as well as with new actors such as the private sector, financial institutions and civil society, to identify exactly where gender gaps are most significant and what solutions may be possible.

“The World Bank has been able to provide a neutral space for new stakeholders to gather to talk about gender equality. With the exciting changes happening in the energy sector overall, we knew we had a unique opportunity to go beyond just discussing the issue by implementing tangible interventions,” said Inka Schomer, World Bank Group Gender Lead Ethiopia Energy Portfolio and Operations Officer.

The Ethiopian government and the World Bank have not just looked at electricity access and utility employee gender balance, but also at gaps between men and women in access to finance to purchase solar panels, and at indicators like literacy, gender-based violence rates and women’s representation in academia. A nationwide assessment conducted by the Ministry of Women, Children and Youth Affairs found almost one in two women (49.6%) reported having experienced at least one type of violence in their workplace; UNESCO data shows women comprise just 10% of academic staff in Ethiopia.

The new data led to clear commitments and actions to be embedded in the National Electrification Program (NEP) launched in November 2017 and new engagement areas targeted in NEP 2.0 launched in March 2019 at the Africa Energy Forum Off-the Grid Summit.

These include the establishment of high-level decision-making bodies to make sure gender equality is championed by key decision-makers and department heads and not just the priority of the Women, Children and Youth Affairs Directorate at EEU.

Leadership skills training is being offered to key female staff and focal points to tackle underlying gender norms about women speaking up in public, and to create buy-in for reform. This year, new focus is being placed on off-grid value-chains including by fostering female solar technicians and supporting women-led businesses to break into the off-grid market.

Childcare was identified as an impediment to female workforce participation, so childcare facilities are being established in one-fifth of the utility’s offices. Career development and support for Science, Technology, Engineering and Mathematics (STEM) education (including full scholarships for up to 88 female employees) is being provided, with a goal of women holding 30% of all jobs over the next five years.

Recent progress includes the adoption of a sexual harassment policy, codes of conduct for staff and contractors, a grievance redress mechanism with detailed procedures to enable reporting of cases, and the communications material to alert staff to policy changes and the new commitment to address gender-based violence.

Targeted actions are supported through technical assistance from ESMAP Africa Gender and Energy Program and the State and Peacebuilding Fund Gender-Based Violence grant, which has leveraged allocation of dedicated client executed funds.