Skip to Main Navigation
This page in:_
FEATURE STORY March 7, 2019 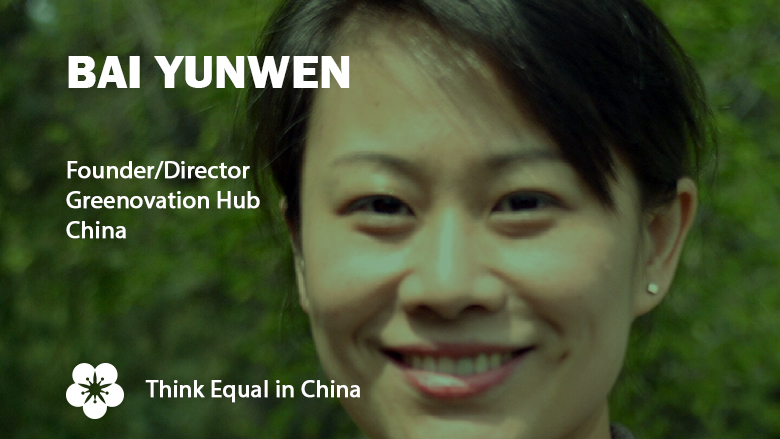 On International Women’s Day 2019, we are sharing stories of women doing inspiring work across China. Their diverse contributions highlight the transformative power of women in the country. Bai Yunwen is founder and Director of Greenovation Hub, a Chinese independent think-tank organization focused on environmental governance in a global context.

I am the founder of a private environmental think-tank in China. I worked for international environmental organizations and foundations for many years. I don't have great ambitions. But I believe that action will bring change and I will persist in my little dreams. Ten years ago, after witnessing the twists and turns at the Copenhagen Climate Change Conference, I couldn’t be more disappointed with the climate negotiations, and made up my mind to do my part in the post-Copenhagen period. So, two years later, with the skills and experience I gained in international institutions, I co-founded the Greenovation Hub, an environmental nongovernmental organization that’s based in China with a global perspective, engaged in domestic environmental public policy research and promoting dialogue around global climate and environmental issues. In 2015, I was on site and had the most exciting experience when the Paris Agreement was reached. Greenovation has entered its eighth year now.

I get up on time and in a good mood. My work gives me the opportunity to see new things and learn new information every day; the colleagues I work with in the office are also very interesting and we have a relaxed working atmosphere. Of course, it is also essential to choose some energizing music as your alarm. For me, the music in Mars Rescue is a good choice.

The television documentary series "Animal World" narrated (in Chinese) by Zhao Zhongxiang opened a door for me to understand nature. My deep love for nature and strong interest in the animal world is the reason why I chose to work in the environmental field after graduation. For this reason, my first job was to investigate illegal trade in wild animal products. This job made me realize that the solution to environmental problems cannot depend on environmental awareness campaigns and technologies alone. We need to develop an ecological balance between man and nature in a new economic system. An environmental issue is associated with socio-economics, politics, religion and culture. Climate change is an all-encompassing issue. Today, I am working like a student returning to school, shocked by new knowledge every day. There is no end to learning.

Last year, I became a mother, which motivates me more to move forward in this field. I hope that one day when my daughter grows up, I can tell her with certainty: "Mom has worked hard for you to see the blue sky today."

While women have always been on the verge of traditional science and the political sphere, they are “trailblazers” in environmental protection. The book “Silent Spring” is beautifully written and also scientific. It discusses the harm of DDT to people and the environment and launched the modern environmental movement. Its author Rachel Carson is a female marine biologist. Also, Dr. Jane Goodall, who studied animal behavior, went deep into the African jungle and spent more than 30 years with chimpanzees. She made an outstanding contribution to the protection of chimpanzees and the understanding of ourselves as human beings.

Women have a more direct connection with the environment than men. In the traditional social division of labor, women are the main agricultural producers participating in farming and food production, as well as the main users of natural resources. As women are also responsible for the daily life of the family, environmental pollution and water shortages will directly affect women's daily life. All these connections make women more aware of land, water and forests, more respectful and protective of natural resources, and they pay more attention to the protection of the future of nature and the environment.

I just want to say that women have an inherent advantage in this field. Once they have made up their minds, they will work hard on the ground. But don't forget work-life balance and look up at the sky from time to time.

We do not inherit the Earth from our ancestors; we borrow it from our Children.

The crux of many social and environmental problems is a lack of consciousness of social citizenship. Our economy has developed rapidly, but civic awareness has not developed at the same time, and civil society has stalled. People lack respect for others and for culture, respect for the environment and respect for the human personality. In such an environment, various social contradictions and conflicts continue to emerge.

The prevalence of consumerism also hinders sustainable social development. We need a new development model that meets the needs of the present generation without threatening the ability to meet the needs of future generations. But the endless shopping carnival and the convenience of ordering food online has filled our lives with excessive and irrational consumption, affecting the values and behavior of young people. This is bound to increase our excessive exploitation of natural resources and harm the ecological environment. Restraining consumption and materialism for the country’s sustainable development is a systemic issue that requires paradigm shifts in the concept of development. Today, “ecological civilization” has been upgraded to an unprecedented strategic level in China. But how to implement political commitments and ideas is key to solving sustainable development challenges.

With regard to climate change, in the six years between the Copenhagen climate change conference in 2009 and the successful Paris summit in 2015, China’s position on international climate negotiations has changed dramatically, from questioning whether a legally-binding international framework is needed to a strong supporter and leader in the search for bilateral and multilateral approaches to addressing climate change. China has been promoting the concept of “ecological civilization.” In the next 25 years, this concept will not only affect the global climate governance agenda but also play an important role in global clean energy transformation, transportation electrification and low-carbon urban development.

Currently, as the laws and policies that truly guarantee gender equality have limited effect, women need more self-awareness and action. First, we need to form cognition and build consensus in discussions on gender equality in the workplace. The frequent occurrence of sexual harassment in the workplace in 2018 was an extreme manifestation of gender inequality. However, there are many other seemingly “moderate” issues in gender inequality in the workplace. For example, there are very few female speakers at conferences; media reports cite more views and comments from male than female experts; and women are missing in company management. Though not in the form of violence, such issues will systematically restrict women’s career development, and consequently reinforce the male dominance in the social structure. Opposing sexual harassment is only the beginning. Women’s demand for gender equality should not stop at getting protection. They should also actively increase their voice and power to affect decision-making in the workplace, so that we can participate more actively and fully in the process to pursue gender equality and reshape power structures. In addition to our own efforts, the government should incorporate gender considerations into economic policymaking; and companies should list gender equality as a corporate strategic goal from top to bottom, formulate corresponding safeguard policies, and shape progressive corporate culture. In this regard, we can learn from the practices of multilateral financial institutions such as the World Bank and ADB.

Hope. Recently I attended a conference on globalization and women's rights in Malaysia. Most of the participants were women, and they called each other “sisters.” These participants were women’s rights activists from various parts of Asia who promote gender equality and strive for women's rights in various ways. They work hard and use their spiritual strength to promote the social and economic status for themselves and women around the world. I remember one of the sisters said: "Although we still need 170 years to eliminate the gender gap in the global economy, having women sit in the boardrooms of major companies around the world and play a leading role in the international political arena must be something we will be able to see in our lifetimes."