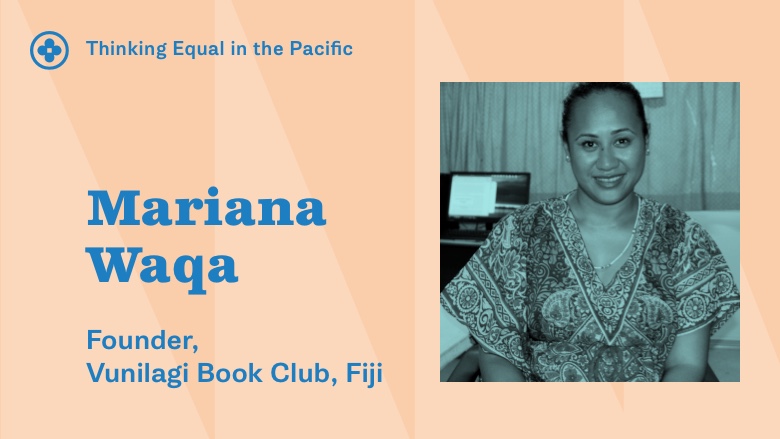 For International Women’s Day 2019, get to know some of the women driving change and increasing equality across the Pacific Islands and Papua New Guinea. Mariana Waqa is the founder of Vunilagi Book Club, a small non-profit organization set up on the outskirts of the Fijian capital, Suva, to encourage reading and literacy in some of Fiji’s most marginalized communities.

Could you tell us about yourself?

I moved to Fiji in 2017 so I could learn and understand the Pacific context from the everyday grass-roots experience of the people here. I grew up in Australia and had recently completed a degree in Theology. That year I volunteered for the Methodist Church of Fiji and was asked to survey Nanuku squatter settlement. I surveyed the settlement for seven weeks with a team, and during that time I saw many children were illiterate. At first it shocked me; but I began to think of how I could contribute to a solution. I came up with the idea of a small book club which would promote literacy to children.

I started reading sessions in Nanuku and named it the Vunilagi Book Club. Vunilagi means ‘horizon’, and I felt this captured the spirit of moving forward and ensuring that a generation of young readers and leaders are raised for the future.

It’s now 2019 and the club has evolved in so many ways. The children now arrive early so they can help set up the books or sit quietly and read or look at the pictures in a small group while talking amongst themselves. They’ve begun to understand the importance of reading and how it gives them knowledge, takes them places, and exercises their imagination. In the famous words of Dr. Seuss (who’s a club favourite!): “The more that you read, the more things you will know. The more that you learn, the more places you’ll go!”

Vunilagi donated over a thousand books to six different rural villages in 2018 and we now have a pool of around 30 volunteers, who come from different backgrounds: university lecturers, students, retirees, and those from church and politics.

Last year our first Poetry Competition was held – at Naivicula District School, in Tailevu North, near Suva – and the children wrote some amazing poems! Oftentimes in our culture children are not encouraged to speak up, share opinions or express themselves a lot, so poetry is an avenue for them to do that.

My faith in God motivates me to be courageous when I don’t feel very brave,  and helps me to learn from my mistakes. I am also motivated by those who have gone before me here in Fiji. I am not the first, and I won’t be the last Fijian to look at my country, and say to myself: “Here is a problem that affects my people, now how can I contribute work towards a solution?”

Where do you see Vunilagi Book Club going?

I would like Vunilagi Book Club to be officially registered as an organization. The future lies in collaboration and partnership with other amazing groups and peoples who have similar visions towards a more educated and socially conscious society here in Fiji. I would like to partner up with libraries, teachers and community leaders; those who are passionate about childhood development in their communities.

Reading and education: what role does this play for women and girls?

It’s an absolute necessity, especially in countries where there is a very strong patriarchal culture and system, such as here in Fiji. Once people – especially women – are literate; it means they can begin to form their own opinions and thoughts.

This includes studying and even critically analyzing their culture and the parts of it which suppress or are unjust towards women. Culture is dynamic, and therefore susceptible to change or reform; so if both girls (and boys) read and read widely, they’ll have the mindset to make changes that champion the dignified treatment of women in this country.

In your view, what do you see as being possible for Fiji, and for the Pacific more generally?

My hope is for Fiji to be a more tolerant society when it comes to holding differences of opinions or thought. I wait for a Fiji where critical thought and thinking is encouraged rather than suppressed, attacked, or censored.

One of my goals is to eventually obtain a PhD in some area of Theology or Biblical Studies. The Bible is a fascinating piece of literature that encompasses so many themes for me; ethics, politics, science, history etc. And despite of its critics, one cannot deny the influence (both good and bad) the Bible has had throughout the world in the last two millenniums.

What change would you like to see, to bring greater equality in Fiji?

In a country like Fiji, many people are in survival mode. They prioritize feeding their families and paying their rent over topics such as ‘equality’. They are then unlikely to invest time to it, unless it has an immediate effect on their lives and families.

Education is therefore the most effective tool for gender equality in Fiji but it must be presented in a way that people can connect it as something beneficial to their daily lives.

**The World Bank works to support early childhood learning in the Pacific, including through the Pacific Early Age Readiness and Learning Program, and recently approved a Multi-sectoral Early Childhood Development Project in the Republic of the Marshall Islands.