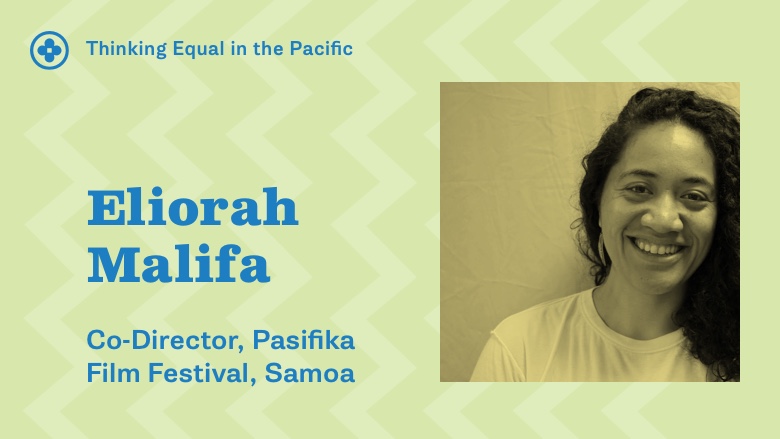 For International Women’s Day 2019, get to know some of the women driving change and increasing equality across the Pacific Islands and Papua New Guinea. Eliorah Malifa is the Co-Director of the Pasifika Film Festival, which showcases the diverse work and talents of Pacific storytellers through filmmaking. In 2019, the festival expanded to the Northern Hemisphere for the first time – to Salt Lake City, Utah, in the United States.

I’m an arts worker/coordinator. I am passionate about facilitating opportunities for artists, especially diverse artists and storytellers. I am co-Director of Pasifika Film Festival alongside Kalo Fainu. Outside of that, I have worked with Australia Council for the Arts on festivals and arts projects, Information & Cultural Exchange on screen culture programs and other cultural programming.

I always wanted to work in a creative sphere, so I undertook a Masters degree in Media Arts and Communication. There is where I met my co-Director in Pasifika Film Fest and when I started working in the arts. In a way it was all a bit coincidental and serendipitous!

If there is something you want to do creatively, just do it. It may seem easier said than done, but often, with creative projects, if you continue to 'strategise' and try and think things through, things either won’t happen or they won’t happen very fast. Alternatively, if it’s a lack of experience that stops you, the arts sector is a fairly forgiving industry for making mistakes and learning on the go.

If we are talking specifically about working in arts production, or arts management, the best advice I would give is that you have to be passionate about it. A lot of countries in our region have thriving arts and culture sectors, but the funding they receive is not great. If you’re at university you should try and get some experience while you’re studying. [This will help] to get an understanding of what it’s like to be in production mode and working to a tight ship because of budgets.

What do you see as the biggest issues facing the Pacific right now and how can they be addressed?

That one is kind of easy: climate change. As developing nations, we have a range of issues with the economy, customary land rights, youth unemployment et cetera, but the one glaring and most publicized issue at the moment is definitely climate change and rising sea levels. It's really evident for us.

A question is: how do you make people on the other side of the world see that all the stuff they create, or the stuff they spray into the atmosphere, has caused the sea outside my family’s house in Samoa to come right up to the wall out back, where we used to be able to walk for a good 10 meters before touching water? Or to make them understand that the number of cyclones we have experienced in the Pacific in the last 10 years is not 'regular'?

We can do our own bit, which we have begun to. Samoa has banned plastic bags and started using renewable energy, for example.

Where do you see Samoa and the Pacific in 25 years?

I would love to see a Pacific film industry: creating jobs for the youth, contributing to the regional economy, with offshore film and television projects being able to source crew on island no matter where they are shooting: Hawaii, Guam, Solomon Islands, Samoa, Fiji or elsewhere).

What change would you like to see that could bring greater gender equality in the Pacific?

Domestic violence is an issue in Samoa, as it is across the whole of the Pacific.

To combat this, I think the greatest action that could be taken is education. Both of perpetrators and those being abused, to understand what options are available to them, why sometimes this type of abuse takes place (mental, historical, physical trauma), as well as the affect that this type of abuse has on future generations.