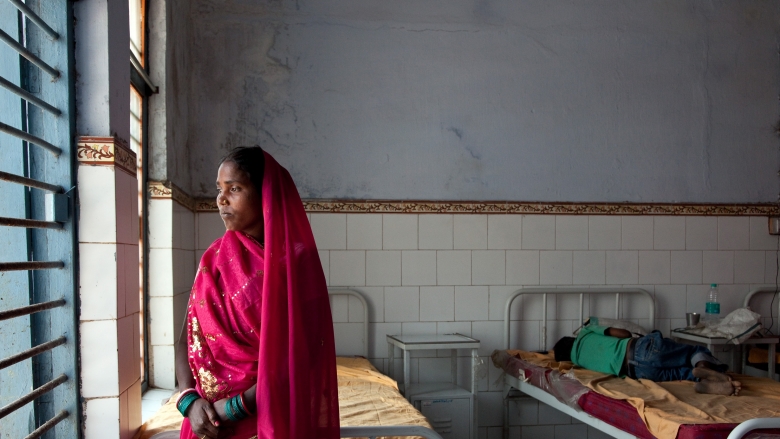 A woman at the Chapra District Hospital, Chapra Bihar. In India, average cost of hospitalization is Rs 24000. Health shocks push over 4% Indian households into poverty each year.

The expansion of insurance coverage through the Ayushman Bharat - Pradhan Mantri Jan Arogya Yojana (PMJAY) has the potential to be a major milestone on the road to achieving universal health coverage and a minimum social protection floor in India. The need is real: out-of-pocket expenditures due to health crises are a leading cause of indebtedness in the country, and health shocks push over four per cent of Indian households into poverty each year. These realities are inconsistent with the aspirations of a middle-income, middle-class society.

PMJAY, launched on September 23rd 2018, aims to provide the poorest 40 per cent of the population (about 100 million families) with health insurance covering over 1300 secondary and tertiary care packages at public and empanelled private hospitals, up to an annual limit of 5 lakh rupees. It builds on a decade of experience implementing government sponsored health insurance schemes in India.  Rashtriya Swasthya Bima Yojana (RSBY) was launched in 2008 to provide health insurance coverage to Below Poverty Line (BPL) families. Over 20 states also introduced their own health insurance schemes. At their best, these schemes can expand access to private hospitals using public money, empower government hospitals to improve the quality of their services, and protect the poor and vulnerable from the costs of hospitalization. At their worst, the transactional nature of insurance and the complex web of stakeholders can overwhelm state oversight capacity, resulting in beneficiaries in name only, widespread fraud, and minimal impact on health and financial protection. India has experienced both.

There is a long list of issues related to health system development raised by PMJAY, but here we focus specifically on the potential (and limits) of PMJAY to enhance financial protection. We offer five observations.

"India’s Out-Of-Pocket share of 62% of total health expenditures is among the top ten in the world. The main reason is not insufficient revenues, but rather because less than 5% of government spending is allocated to health, much less than the lower middle-income country average. "

First, while the intent to target the poorest 40 per cent is laudable, it should be recognized that a far larger share of the population is in need of a safety net to protect against health-induced financial shocks. India has moved from being mostly poor to mostly vulnerable. In fact, according to the National Sample Survey 2011 (the most recent available), the difference in monthly per capita expenditure by a household at the 40th percentile of the population and another at the 80th percentile is only about Rs 1,000.  This is dwarfed by the . For this reason, significantly higher coverage will ultimately be required to ensure financial protection for all.  In fact a small number of states is aiming for universal coverage already.

Of course higher population coverage will mean a more costly program. This trade-off would have been easier to navigate if PMJAY had offered a more modest benefit package with fewer high-end procedures.  But expanding coverage will have the added advantage of making beneficiary identification much easier and reduce the risk of exclusion errors. Future options include extending eligibility to all ration cardholders, adopting exclusion instead of inclusion criteria (such as eligibility for all except formal sector workers), or going universal.  These approaches would be simpler to administer than the current route of relying on the Socio-Economic Census (SEC) database for identification.  Experience from other programs suggests that it is not easy to operationalize SEC, especially in densely-populated urban environments.

Second, PMJAY cannot be expected to be the primary vehicle for reducing the health system’s overall reliance on out-of-pocket payments.  This is because total OOP is at least twenty times higher than the likely PMJAY budget, and it is mostly spent on drugs and outpatient care, which are not covered. At the current juncture, leaving these out of the benefit package makes sense on many levels. They do not impose the same one-time financial shock on a household as a hospitalization episode, even if they add up to more on an annual, population-wide basis.  Empanelling outpatient providers and drug sellers would also be prohibitively complex, with huge scope for fraud and over-use.  And since a large share of drug spending is self-treatment by a population that is substituting for inadequate medical care, any solution must focus on improving the quality of care on offer.  This is easier said than done, but other reform initiatives under the umbrella of Ayushman Bharat – including the establishment of 150,000 health and wellness centers – could make an important contribution to this agenda.

Third, PMJAY beneficiaries must be empowered.  This was a weak point of RSBY. Awareness campaigns to inform beneficiaries of their entitlements, including how and where to access services, will be essential to ensure they get the care they need on a cashless basis. Robust grievance redress mechanisms to help resolve patient complaints will also be important.

Fourth, while states are rightly in the driver’s seat for PMJAY implementation, there are areas where the Center should take the lead.  Among the most important is to ensure portability of coverage across state lines, a key feature of the scheme.  This offers huge potential, especially to migrant populations and those residing in states with fewer hospitals offering high-quality care.  But operationalizing this will require a centrally-managed modality for beneficiary identification, pre-authorization, and claims management for cross-border patients.

Lastly, in the long-run, India’s governments (the Center but especially states) will have to spend far more on health than they have in the past if financial protection against health shocks is to be assured.  Globally there is a clear relationship – the more countries spend on health via the public purse, the lower the reliance on impoverishing and inequitable out-of-pocket spending by households. India’s OOP share of 62 per cent of total health expenditures is among the top ten in the world.  The main reason is not insufficient revenues, but rather because less than five per cent of government spending is allocated to health, much less than the lower middle-income country average. Reversing this pattern cannot be done overnight, but the first step is to start building a health system – not just a scheme – that is able to spend additional resources effectively. Achieving this would go a long way towards truly establishing health insurance programs as a core pillar of India’s social safety net.