JINJA, January 30, 2018 – Spared the congestion of the Uganda’s capital Kampala, Jinja, a town in the east, has a more leisurely beat to it. The predominant art deco buildings all over the town reinforce its modern feel. The town also has a wild side. It lies on the Nile; whose downstream wild white-water rapids are a draw for rafters and kayakers, earning Jinja the reputation as East Africa’s adventure capital.

Until 2016, the road to Jinja from Kampala was part of the adventure. Its potholes were a menace to motorists and cyclists and making it nearly impassable.

Today, the drive into Jinja is smooth and comfortable. Reconstruction of 2.22km Nalufenya-Clive Road West concluded in October 2016. The redesigned road is wider, has a working drainage system, traffic signs, and bus stops. At night, it is lit by solar-powered streetlights.

The improvements were made under the Uganda Support to Municipal Infrastructure Development Program (USMID), implemented by the Ministry of Lands, Housing and Urban Development and financed by a $150 million loan from the International Development Association (IDA). The first phase of the program was approved in 2013 and will run to the end of 2018.

USMID is being implemented in 14 municipalities across the country to expand infrastructure and improve service delivery. Eligible infrastructure includes roads, waste management, water and sewerage extension to peri-urban areas, and local economic infrastructure such as markets and slaughterhouses, and bus, taxi, and lorry parks.

So far in Jinja, a total of 77.56km of equivalent two-lane roads with associated road infrastructure have been improved, including

It has also constructed three taxi parks with 328 lock-up shops and 143 parking lots for vehicles and a Lorry park.

USMID is a welcome intervention, according to Jofram Waidhuba, the deputy town clerk of Jinja Municipal Council. “For the first-time urban councils have had a giant intervention in infrastructure,” he said.

Jinja town’s three divisions have 80km of tarmac roads, most of which are in a poor state, and 90km of murram roads that require upgrading. But its annual road budget of just over Shs1.2bn ($328,760) can only reconstruct 1.5km of road – excluding drainage reconstruction, road signs, and streetlight installation.

“With just the Shs1.2bn, we need 80 years to reconstruct Jinja town’s tarmac roads,” Waidhuba said, noting that local politicians demand that it is spread across the three Jinja Municipality divisions – Central Division, Walukuba/Masese Division, and Mpumudde/Kimaka/Nalufenya Division. “The result is very thin results on the ground.” 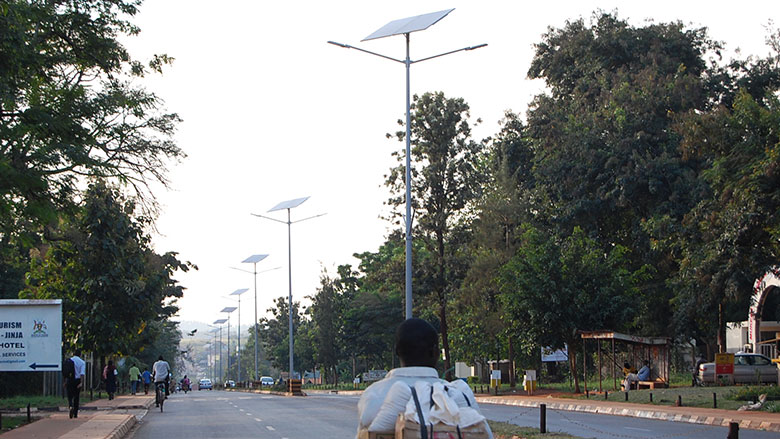 USMID has also helped the municipalities enhance their revenue sources, according to Isaac Mutenyo, the program’s coordinator.

“We discovered that many municipalities and other local governments have many revenue sources, but use inadequate methods to collect this revenue,” he said.

An inventory of possible revenue sources showed that many municipalities did not collect property rates or ground rents, Mutenyo said. Today, they all now have property rates and revenue source registers. Revenue from those sources could be spent on improving infrastructure and other essential services.

The new roads will also save money in the long run, said Mutenyo, as they were designed to last for 20 years, minimising need for repairs for the foreseeable future. The newly-installed street lights also use solar power rather than the more expensive hydropower.

While these measures will lead to a “substantial” increase in municipality revenues, they are still not enough to ensure that the new infrastructure is well-maintained. Government support - which was 90% of total municipal funding in 2013 - has reduced overtime.

Government leaders expect the Bank’s funding to attract investment from other donors and the private sector, as well as lead to an increase in central government funding, as urban areas expand and national tax revenue increases.

“The business environment has improved significantly in our municipality. Our hotels are always full, farmers can transport their produce to the market easily, and businesses are staying open for longer hours because of the good roads and street lights,” said David Kyasanku, Town Clerk of Hoima Municipality in Western Uganda. “This has increased our revenue collection, and as a town council we are delivering better services to our people.”