Skip to Main Navigation
This page in:_
FEATURE STORY January 15, 2019

Coping with Risks in Yemen While Providing Hope

Approximately 16 million people currently lack access to safe water and sanitation, and some 18 million lack access to basic healthcare. Over one million cases of cholera have been confirmed since the epidemic erupted last year.

Lack of progress on addressing water and sanitation challenges threatens to undermine the efforts of Yemeni institutions and the international community to prevent the spread of the cholera epidemic in Yemen. In the last four years, Yemen's water and sanitation infrastructure has suffered significant damages due to the ongoing war, the lack of energy, poor maintenance, and more than three years of unpaid salaries of civil servant staff.  Approximately 16 million people currently lack access to safe water and sanitation, and some 18 million lack access to basic healthcare. Over one million cases of cholera have been confirmed since the epidemic erupted last year.

The World Bank has worked tirelessly with UNICEF and WHO to ensure a timely response to the prevailing cholera outbreak through the Emergency Health and Nutrition Project in Yemen. This IDA funded grant provided improved water services in cholera-affected areas to 1.6 million people and rehabilitated water and sanitation facilities in health centers, schools and communal gathering places. Water treatment has been provided through bulk chlorination of water sources, piped networks and private water trucks.  Hygiene kits have also been distributed to schools and homes, and in cholera-affected areas, 1.85 million people have been provided with improved access to sanitation.

Despite all efforts, the scene in Yemen remains challenging. Yemenis face a range of threats every day, from the ongoing conflict to skyrocketing prices of basic commodities and lack of basic services. These threats can be fatal. This is especially true in isolated regions such as the Maswar district of Amran governorate where roads are rough, and cholera is prevalent. 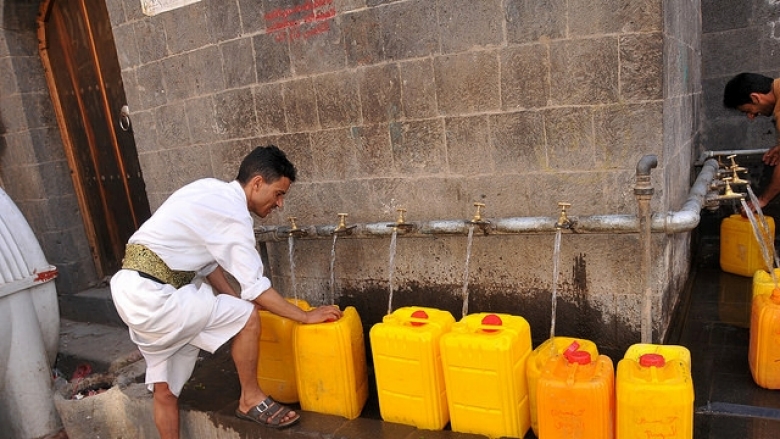 Yasser Al-Azani, from Beit Al-Azani village in Maswar, barely escaped succumbing to cholera, which he caught from drinking polluted water from unprotected sources in the village. He didn’t know that he could die from drinking this water.

Yasser felt severe pain in his stomach. Luckily, his mother was able to get some villagers to help her take Yasser, the sole breadwinner of the family, to the nearest health center.

"When Yasser falls sick,” said Zahra Sadeq, Yasser’s mother, “we become worried because the s family depends on him. This time I was afraid that he might die of cholera.”

Yasser was admitted to the health center and received initial treatment.

One of the Rapid Response Teams (RRT), trained through the IDA project, visited the village for follow up treatments for cholera.

“When we saw Yasser in the health center, he was thin and exhausted. He was all skin and bones,” said Mohammed, a member of the RRT.

Yasser said that people in the village used to drink water from unprotected wells and other unsafe sources. They didn’t know they were exposing themselves to potentially fatal infections.

"We used not to worry about hygiene in the village. We used to drink water from everywhere, even if it wasn’t safe. We weren’t aware about chlorine and how to use it. However, when the Rapid Response Health teams visited our village, they taught us the importance of drinking safe water and using chlorine to disinfect water,” said Yasser.

In partnership with the World Bank, UNICEF has so far trained 850 Rapid Response Teams that now belong to the General Authority of Rural Waters Supply Project (GARWSP). The training was part of the Emergency Health and Nutrition Project, and it aims to train two-person teams (one male and one female) to respond to the cholera outbreak in many districts throughout Yemen. After Yasser’s admission to the health center, the RRT visited the village, but they encountered problems due to the lack of access roads to the village. The team had to stop the cars in the neaby Al- Maghraba village and proceed to Beit Al-Azani village on foot.

Two hours after the team arrived in Yasser’s village, they visited Yasser’s house and 25 surrounding houses.

“The team members distributed the necessary supplies to residents and taught us how to avoid cholera and also how to use chlorine to disinfect water containers,” explained Yasser.

The RRT members distributed hygiene kits and chlorine to all residents in the village and provided guidance on hygiene and cholera prevention.

"They walk for about two hours in rough roads. The health team members also walk the same distance to reach the village and disinfect water sources," he said.

The water and sanitation activities are part of the Emergency Health and Nutrition Project that has helped treat over 664,000 out of the one million suspected cholera cases. This has contributed to reduce the cholera fatality rate from 2.3% to 0.21%. In addition, around 700,000 m people have been vaccinated with oral cholera vaccines in the high-risk districts. The project supports hospital and health workers and has funded 2,900 health facilities to preserve the capacity of the health sector.