Engaging with Social Change through the Visual Medium 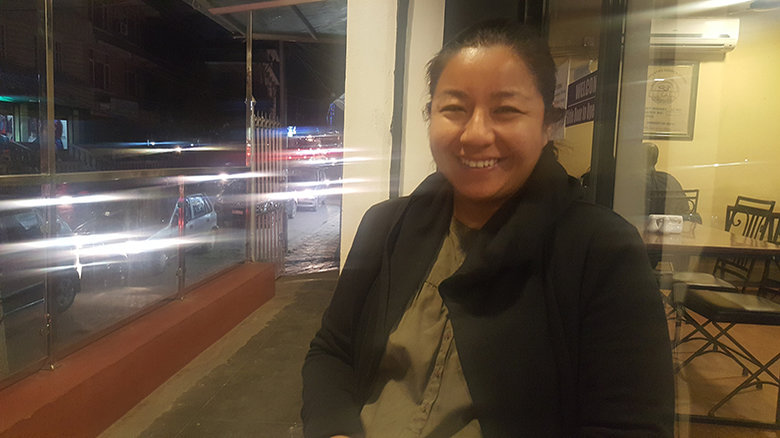 NayanTara Gurung Kakshapati started working as a volunteer at the Family Planning Association of Nepal (FPAN) as a teenager while still in high-school. Growing up as a middle-class city kid, this experience was vital in shaping her understanding of realities of life outside Kathmandu, especially for women. During her four years with FPAN, she learned about the specific challenges in reproductive health work and the wider context of development work in Nepal. “I was young and idealistic and sadly NGO politics left me scarred,” she recalls. NayanTara went on to study history, politics and visual arts in the US, and continued her engagement with social issues in various ways.

Soon after college, she undertook a short internship with Equal Access, an international non-profit organization that worked through community radio in various developing countries, including Nepal. NayanTara spent the summer of 2005 listening to hundreds of hours of community radio programs in Nepali to help Equal Access write a new proposal. Dozens of episodes of programs like ‘Sathi Sanga Manka Kura’ later, NayanTara remembers thinking “What am I doing here, sitting in this office in San Fransisco?” “There was so much happening back home that I wanted to engage with,” she says.

She returned to Nepal in early 2006. Soon after, she was invited by a journalist friend to attend a Maoist press conference. She jumped at the opportunity, despite the ‘dangers’ involved in the offer. She remembers walking for six hours somewhere in the hills of Dhading to reach a village where a Maoist cultural program was in full swing. She photographed the revolutionary song and dance, and interviewed young Maoist cadres who looked at her as curiously as she looked at them. That evening, the press conference took place in a tiny room above a cow-shed for a motely mix of Nepali and international media and the final ceasefire that ended Nepal’s ten-year armed conflict was announced. This was the first of NayanTara’s many unexpected encounters with Nepal’s rapid political transitions. In April 2006 she found herself rebelling against curfew and running through the streets of Kathmandu to witness, document and participate in the second People’s movement that overthrew the Nepali monarchy.

NayanTara began to realize that she had perhaps found her own way to engage with Nepali politics and social issues- through storytelling, research and pedagogy, using visuals as her primary medium. “Truth is highly subjective, even in the visual medium. “Seeing” has a certain way of making people think about what is happening around them.” she says. With the objective of bringing together photographers and other visual storytellers to nurture unique voices that document and engage with social change in Nepal, NayanTara co-founded photo.circle in 2007.

In 2010, NayanTara co-founded Nepal Picture Library which strives to create a broad and inclusive visual archive of Nepali social and cultural history. Since its inception in 2011, the archive has collected over 100,000 photographs and other material, and initiated various research and pedagogical initiatives.

In 2015, NayanTara co-founded Photo Kathmandu, an international photography festival that takes place every two years. The festival is a platform that creates conversations between the city, its public, its past, and its dreams and aspirations. Each year, it covers a different socio-political theme. For its third edition this year, Photo Kathmandu focused on gender, patriarchy, power, identity and sexuality.

“We need to create alternative safe spaces to discuss these issues. Maybe critical discourse and open conversation is the first step towards change?” NayanTara states.

Practice what you preach

NayanTara believes that “change begins at home”. This year, she has developed a code of conduct for Photo Kathmandu that will be carried forth in all photo.circle initiatives. The code of conduct states a zero tolerance policy towards ‘any/all harassment and/or intimidation of a sexual, physical, verbal, emotional or any other nature based on gender, sexual orientation, age, appearance, marital status, religion, ability or any other excuse’. This year, the festival withdrew its invitation to a famous award-winning photographer who had several complaints of sexual harassment surface against him. NayanTara says, “We are very serious about our zero tolerance policy. We will stand by this code of conduct regardless of personal and professional relationships.”

NayanTara’s work uses photography, film and the visual arts as prompts and tools for research, learning and advocacy. As in the past, this year too Photo Kathmandu offered school and college students and teachers a variety of learning opportunities through its arts and education program. “The way young people engaged with critical themes such as sexual violence, LGBTQI rights, and feminist history has been really heartening to see. They are our future mothers, fathers and policy makers so we hope to impact their politics urgently,” NayanTara says. She also facilitates workshops for media professionals, teachers, and other special interest groups, engaging them on these themes through visual storytelling. “Putting together resources to expand these projects is not easy, given that this work overlaps and falls between traditional frameworks of development work, academia and the arts. But the attempt is to try to find a way to think outside the box and find innovative ways to engage with social change.” she says.