Creating An Identity of Her Own 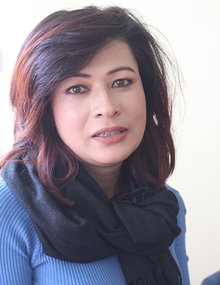 Born as Kailash Shrestha, the youngest son in a family of five in Kathmandu, Bhumika Shrestha is now a 30 year-old transgender woman. Growing up, unlike other boys her age, Bhumika loved to play with dolls and wear makeup. Her family didn’t make it a big issue because she was still a child. Bhumika’s mother even painted her nails and lined her eyes with kohl, obliging Bhumika’s request.

Bhumika never knew she might different from other boys until she started being bullied by her class mates when was 11. “I was taunted because of the way I walked and spoke,” Bhumika recalls. “I dreaded going to school because the boys used to shout names and call me chakka (a derogatory term for a homosexual) on my way to and from school.” This confused and frustrated her. “Nobody told me what was wrong with me. I felt normal. Even though I looked like a boy, I always felt like a girl but for me that wasn’t a problem,” she says.

Bhumika continued to face challenges as she grew older. When she was in grade six, her family’s financial situation deteriorated, and she was transferred from her private school to a government school. In her private school there used to be common toilets, however the government school had separate toilets for the genders. She remembers not wanting to use the toilet because the boys in her school used to bully her. Since she couldn’t use the girls' toilet she stopped drinking water at school in an attempt to avoid using the toilet during the day. On days when this wasn’t possible, she went back home to relieve herself. She attributes the kidney stone that she has now to that time. She doesn’t remember a day when she did not cry, and recalls, “I used to wish that I didn’t have to wake up the next morning. I lived in constant fear of bullying and harassment.” When she was in grade eight, she lost her father, and was also pressurized by teachers to leave the school. In grade 10 she left the school, before she could take her School Leaving Certificate examination.

Even though her education had stopped, Bhumika felt relieved to be out of school. “All of a sudden I felt I was free to do anything,” Bhumika says. She started wearing makeup in public, which made her feel happy and beautiful. Her family was very supportive, although her mother and siblings tried to advise her to tone down her makeup to discourage further harassment.

When she was 16, she was approached by Pinky Gurung, a transgender activist from Blue Diamond Society (BDS), an advocacy group for gay rights. When Pinky revealed her identity as a transgender, Bhumika felt comfortable speaking with her and sharing her feelings. Bhumika then started to attend BDS meetings. This made her realize that she was not alone, that it was acceptable to be ‘different’, and that she should not be ashamed of who she was.

After coming out, she said she felt “complete” and that people started to accept her. Since then, she has since been advocating for the rights of the transgender community. “We were never treated like human beings. We did not want to be born like this,” she says, “We were only asking for equal rights, which the Constitution of Nepal has granted us." She still, however, considers that Nepal is leading the South Asia region in terms of addressing LGBTI (lesbian, gay, bisexual, transgender, and intersex) issues. She believes that if anybody wants to ‘come out’, there should be an environment in which they can do so. Bhumika says, “Living a lie throughout your life can be very damaging to both the soul and the society."

Given the experiences she had during her own school years, Bhumika feels that interventions should begin in schools. “We need to bring awareness to teachers and students, because negative experiences can have traumatic effect on an adolescent,” she says, “Many students feel suicidal because they can’t face the trauma. This can permanently damage a child.”

Bhumika has started regular awareness-raising programs in seven government schools in Kathmandu and Nepalgunj, and plans to expand these programs to more schools in the future.

"Living a lie throughout your life can be very damaging to both the soul and the society."
Bhumika Shrestha
Transgender Activist
Api