A Woman of Substance 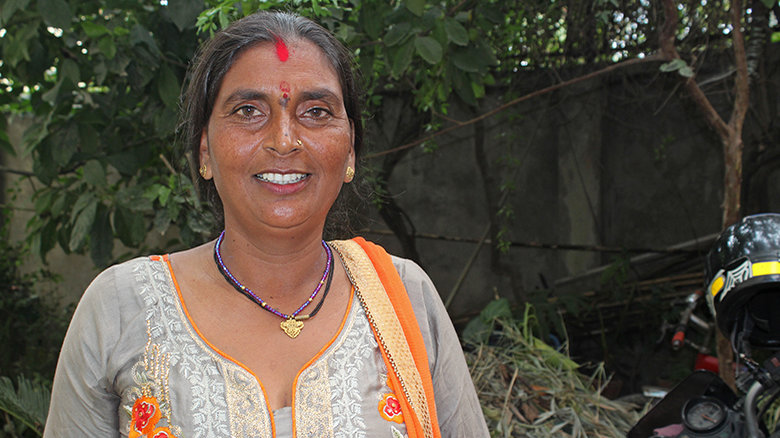 Forty-two year-old entrepreneur and women’s advocate Ramkali Devi Thakur (Lohar) of Mithila in the Central Nepal district of Dhanusha, was married off at 11 years. Ramkali stayed home following the marriage, given that she was still young, and moved in with her husband’s family when she was 18. Ramkali spoke of the trauma of not being able to produce any children for four years after moving in, and the fear she had when her in-laws started to look for a new bride for her husband. Her mother-in-law and other women in the family called  her “barren”, and her in-laws even asked her to stay in another house.

Ramkali’s life became more difficult as her husband, who ran a blacksmith business, wasn’t earning enough. She says, “I felt that I should not stay idle at home and should also help him with work.” She continues, “It was difficult to convince my husband, but after much persuasion, he agreed.” She also considered that working with her husband would help her become financially independent. However, joining her husband in his blacksmithery was frowned upon. “Heating pieces of wrought iron and hammering it was considered a man’s job,” Ramkali says, “It used to be seen as a curse if women followed suit.”

Becoming a role model in the community

In her spare time, Ramkali attended training classes at ReFLECT, a platform to empower women to fight back injustices. The training was helpful as it taught her how to voice her opinions. Through her work, Ramkali gradually become recognized and appreciated in the community. “Men would praise me and would encourage their wives and mothers to join them in their own professions,” she says.

When she became a mother to four children, there was no stigma attached to her anymore. Her mother-in-law and seven sisters-in-law have also since joined the blacksmith business and their income has improved remarkably. Ramkali explains, “In my community, I had to show everyone that there is no shame in earning by working.”

Working to prevent violence against women

Ramkali has also been working to promote women’s rights and to end violence against women in her community. She has become a strong voice in her community, as men listen to her views and people come to her to settle cases of domestic violence.

According to Ramkali, the attitude of men has to change to end gender-based violence in society. She also considers that women need to be financially empowered to enable them to have their voice heard. She is an active member of Swabalamban Cooperative and encourages women to save whatever they have in the cooperative. Ramkali has also formed eight such cooperative groups where women can easily deposit their money and can get credit. However, as alcohol is one of the major causes of domestic violence, Ramkali has established that women who open alcohol shops or local breweries at home are prevented from participating in the cooperative. “Instead, I encourage them to establish other businesses, and I link them with NGOs which provide skill-based training and market support,” she explains.

Ramkali was fortunate to have received credit under a low-interest rate loan from Poverty Alleviation Fund to support her in establishing the cooperative, and feels that other women should receive similar support.

Ramkali has also brought health services closer to her community through the cooperative - which has supported the establishment of a community hospital. Now, pregnant women are able to have free health check-ups, and have the opportunity to make regular visits to the community hospital which is served by a doctor and a nurse. She has also introduced the provision of giving NRs. 500 ($1 = NRs. 113) to each woman who gives birth at the hospital. “This was previously only applicable to those who give birth in government hospitals, but I have ensured that women who give birth in this community hospital also have this incentive,” she claims proudly.

Ramkali promotes the empowerment of women through her role as President of Mahila Adhikar Manch–an NGO which works as a community mediator. The Manch has recently provided driving training to women, and as a result, there are now four women rickshaw drivers in Ramkali’s municipality.

"In my community, I had to show everyone that there is no shame in earning by working"
Ramkali Devi Thakur
Social Worker
Api