Azerbaijan: Just-in-time support for the economy 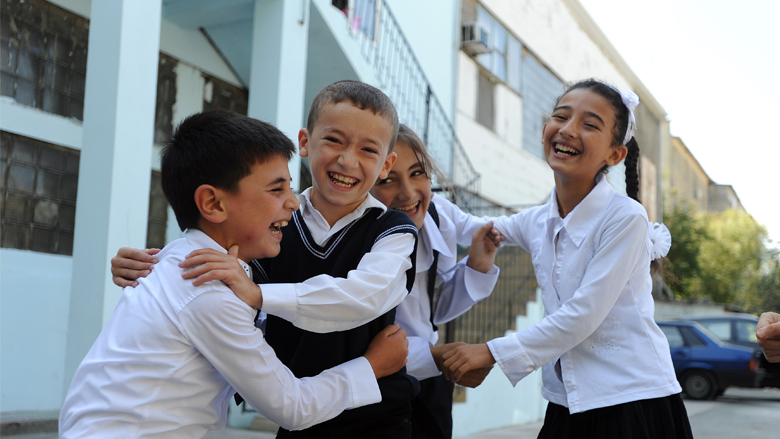 Over the last two decades, oil has been the defining factor for Azerbaijan; not only for its economic growth but also for its development. During the first ten years of the millennium, Azerbaijan experienced an explosion in wealth. As oil GDP, comprising half of the sectoral share of the economy, grew by an average of 21 percent1 per year, fueled by global upsurge of oil prices2 and increased production3. Total GDP grew more than tenfold: from US$6 bn to US$66 bn4.  This was accompanied by rapid decline in poverty, from 49.6% to 7.6%5, increase in real wages, and middle-class growth6.

However, after the decline in global oil prices in 2014, nearly by half, the reduction of oil revenue caused a domino effect in the economy. The double devaluation of the Azerbaijani manat in 2015 erased half of the manat’s value against US dollar. and subsequent fiscal adjustment together with ongoing banking sector distress led to a 3.8% contraction in GDP (2016). This was accompanied with the rising of traditionally low levels of government debt (from 8.5% in 2014 to 22% in early 2018) primarily due to devaluation of manat.

On December sixth, 2016, Azerbaijani President Ilham Aliyev has signed a decree approving the “Strategic roadmaps for the national economy and main economic sectors.” The decree for reforms spanned across 11 sectors, from tourism to agriculture, and aimed to decrease the over-reliance to the oil and gas sector.

Under very tight deadlines, Azerbaijani ministry of finance started working on a roadmap, that would reform the economy which had been impaired by a number of negative shocks such as lower oil prices, weak regional growth, currency devaluations in Azerbaijan’s main trading partners, and a contraction in hydrocarbon production. As a long-term partner of the World Bank Group (WBG), they reached out for support in developing a public finance strategy for the medium term at the beginning of 2016. To be able to broach such a broad project, different teams within WBG worked together closely to provide just-in-time support and to cover various facets of the macro-fiscal framework. Government Debt and Risk Management (GDRM) Program, a World Bank Treasury initiative targeting middle income countries funded by countries funded by the Swiss State Secretariat for Economic Affairs (SECO) worked on the debt management portion of the issue. The Macroeconomics, Trade and Investment Global Practice advised on macroeconomic and fiscal framework and debt sustainability analysis.

The ministry of finance and WBG joint teams had a thorough review of the macro-fiscal and borrowing conditions and honed in three interlinked issues:

With that in mind, the teams tested different borrowing strategies to cover the 2017-2021 period under baseline and different shock scenarios, analyzing debt sustainability, and the composition of the public debt portfolio weighing it against the national risk tolerance. They also recommended several measures to better enable the debt management operations: revising and submitting the Debt Management Law to parliament; improving the reporting system; improving the coordination between the ministry of finance; the central bank and the Sovereign Oil Fund; developing a credit risk assessment capacity in the ministry and improving the IT system, and eventually looking at developing a domestic debt market.

In December 2017 Azerbaijan ministry of finance shared the debt management strategy, with the President’s office. The proposed strategy comprised a macroeconomic policy framework, a borrowing plan, and associated institutional and legal reforms. In August 2018, President Aliyev enacted and published the “Medium to long term debt management strategy for Azerbaijan Republic’s public debt”. The strategy outlines the main directions of the government borrowing during 2018-2025 based on sound analysis. It puts a limit of 30% of GDP for the public debt in the medium term, with a moderation to 20% of GDP by 2025. The authorities also envisage gradual rise in domestic debt, to develop the local currency government bond market. To reflect the changing macroeconomic outlook and financial conditions, the strategy document will be updated every two years.

“As World Bank, our mission is ending extreme poverty and building shared prosperity,” said Elena Bondarenko, the Macroeconomics and Fiscal Management team member. “It is our privilege to provide just-in-time support to our member countries when they most need it. Especially if we can help build resilience to the economy before further shocks cause major damage.”. “The work doesn’t stop here,” said GDRM Program Task Team Leader Cigdem Aslan. “The GDRM Program will continue its support through the implementation phase of the recommendation and help build capacity for the development of the domestic market for government securities.”