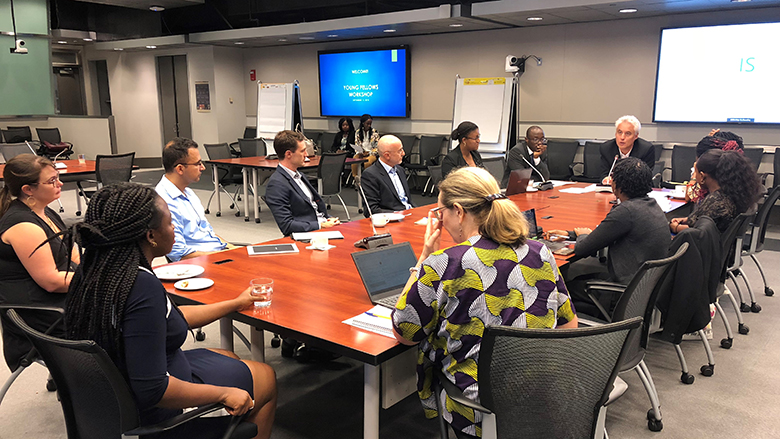 As forced displacement emerges as an important development challenge, ten young fellows from eight countries in Africa are conducting innovative analysis at the World Bank and UNHCR that aims to improve the response to these crises.

This unique group of post-doctoral scholars was selected through a competitive process as part of a partnership program between the UK Department for International Development (DFID), the World Bank Group and UNHCR to build the evidence base on forced displacement. Seven out of ten fellows are women.

Soazic Elise Wang Sonne, a PhD candidate from Cameroon, participated in a recent workshop where the fellows presented initial findings from their research.

Elise has been researching the long-term impact of hosting refugees on second generation health outcomes in Tanzania. She is looking at datasets from three refugee camps in Tanzania.

“I still remember how devastated I became when I saw a homeless Chadian family with little children,” said Elise, recounting her experience as a teenager. The family was one of thousands that were forcibly displaced, fleeing the first and second Chadian civil war.

She was not able to extend her help to the family then, but that experience nurtured her curiosity to study how shocks experienced by parents might impact the health of their children in the long term. After completing graduate studies, she decided to pursue a PhD researching the intergenerational effects of conflict on second generation health outcomes.

Through this fellowship, she hopes to inform policy makers about the magnitude of the long-term effects of hosting refugees and internally displaced persons (IDPs) on the health of the second generation of children.

Ismael Issifou, who received a PhD in Economics, has been working on understanding asylum decisions by countries receiving displaced people. According to his analysis, characterizing the geographical orientation of asylum-seekers is useful to assess their chances of being granted refugee status as the number of applications increases.

“If we know the countries’ trends on granting refugee status, asylum-seekers can seek refuge based on these trends and they may be able to choose the country of asylum,” said Ismael.

“There is a real shortage of researchers specializing in forced displacement, which is a major bottleneck to improving our understanding. The research topics that the fellows are working on are very innovative, and will contribute to filling this gap,” said World Bank lead economist Paolo Verme, who manages the program.

The fellows are expected to complete the first paper by December and the second paper by June next year. They plan to work on the following research topics, and their papers will be published and shared broadly: