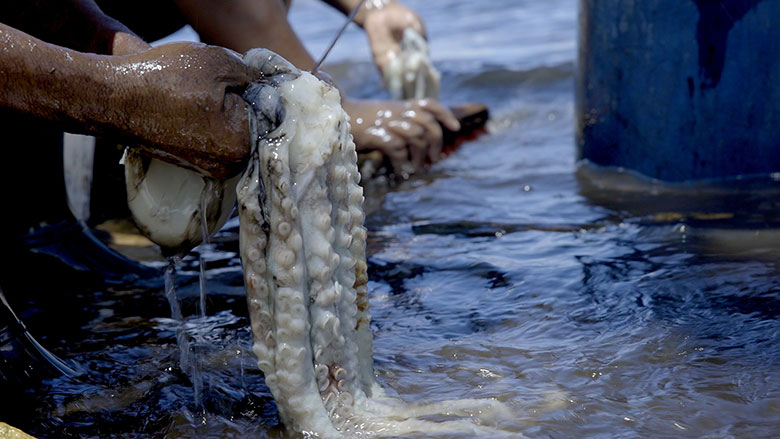 WASHINGTON, September 17, 2018 – When the tide is at its lowest point on Zanzibar’s beaches, women and men bring spears and sacks to the beach to hunt for octopus hiding in shallow waters and lush reefs. Later, they turn the rubbery delicacies inside out and hang them to dry. Recently, this ancient art has boosted incomes as tourists to the Tanzanian archipelago consume these creatures in greater numbers.

This year, octopus fishing communities closed their fisheries for three months in a bid to save dwindling stocks. In Ndooni Village, the fishers were delighted to catch 361 kilograms of octopus the first day they reopened in April, compared to 10-20 kilo on an average day before the closure. Similar practices have been implemented successfully on the island of Rodrigues (part of Mauritius), and in Mozambique’s Quirimbas Archipelago.

“There is real joy when fishing communities see the difference in catch after the closure,” said Daniel Mira-Salama, World Bank Sr. Environmental Specialist. “Understanding the biological cycle of the species and tailoring the fishing effort are fundamental concepts the community needs to take the lead in the sustainable management of their most important natural assets.”

The global octopus catch peaked in 2007, falling by 10% in the decade since. Similar downward trends can be found in Tanzania, Comoros, Seychelles, Kenya and Mozambique.

With support from the World Bank, the $220-million South West Indian Ocean Fisheries Governance and Shared Growth Program (SWIOFish) launched in 2015, with a goal to increase the economic, social and environmental benefit of coastal communities. With the support of coastal communities, the project has helped develop awareness campaigns, training in safety at sea, scientific research, fisheries information systems, and better institutions.

In Tanzania, SWIOFish also supported the purchase and installation of a vessel monitoring system by the Deep Sea Fishing Authority to better detect cases of unreported, unregulated and illegal fishing, such as blast fishing.

Blast fishing is the illegal practice of using explosives to stun or kill schools of fish. By 2015, blast fishing had increased dramatically in mainland Tanzania. The boom in construction and mining had allowed for cheap access to dynamite, and fishers made bottle bombs with kerosene and fertilizer. More than half of the world’s reefs are also threatened by these destructive fishing practices, according to Reef Resilience Network. Entire areas of reef and ecosystems have been destroyed by blast fishing, which is used to ensure a quick catch of fish, while killing hundreds at a time.

Through SWIOFish, the scourge of blast fishing has been dramatically reduced through community-led education, public awareness campaigns and enforcement.

“Blast fishing incidences have been reduced by over 90% in nearshore waters of mainland Tanzania since the early part of 2018, following concerted action by relevant authorities over the previous 18 to 24 months,” said Emmanuel Bulayi, Director of the Department of Fisheries Development at the Ministry of Livestock and Fisheries in Tanzania.

Mozambique’s 2,700-kilometer coastline is the third longest of continental Africa. Rich with marine life, fisheries are considered a sustainable source of financing for rural fishing communities. On the other hand, Mozambique has massive potential for land-based fish farming (aquaculture), particularly for tilapia, which would significantly increase overall fishing production, local communities’ access to protein, and revenue opportunities.

With support from SWIOFish, the Fisheries for Climate Resilience (FishCC), a pilot project implemented in concert with the NGO Rare, strengthens fishers’ rights to their fishing grounds. This includes closures of key breeding areas, much like the octopus example in Tanzania.

Located within the Ponta Do Ouro Partial Marine Reserve in the southern end of Maputo Bay, Machangulo fishing communities have observed worrying trends of diminishing catch and smaller fish. FishCC has helped to create two Fishing Community Councils and is currently supporting the preparation of their fishing management plans. The project will also provide financing to fishing associations to install an ice production machine for better storage while introducing fish farming on a pilot basis. SWIOFish Mozambique is also supporting investment in strategic infrastructure.

To help fishers acquire the skills needed to develop their businesses, the SWIOfish program in Mozambique has help improve community financial skills by establishing and managing local saving and credit groups, a first step in linking fishers, particularly women, to markets and value chains. These groups save some of their earnings and borrow from fellow community members to grow their nascent businesses.

“Helping women build their capacity and knowledge in the business of fishing, from their work as harvesters and processors to price-setters, business owners and entrepreneurs, is one of our priorities,” said Andre Aquino, World Bank Senior Natural Resource Management Specialist. “These savings and credit groups are improving livelihoods of women and families.”