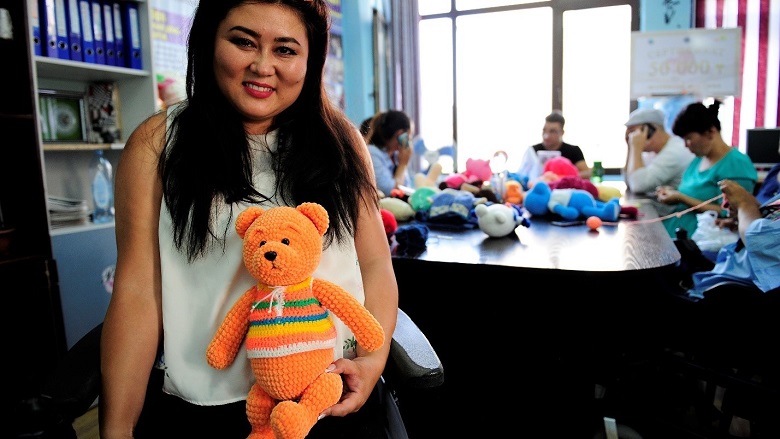 Lyazzat Salikova, nonprofit leader and inspirer of the soft-toy making club for youth with disabilities.

Lyazzat Salikova, a wheelchair-bound young woman, spent most of her life confined to her house. She was surrounded by a loving family, yet increasingly felt the need to move out and start an independent life, one which held true meaning for her.

On her thirtieth birthday, Lyazzat decided to start her new journey, which included getting her first job.

Seven years, and several jobs and university degrees later, Lyazzat now leads a non-profit in her hometown – Kapchagai, a city in south eastern Kazakhstan – where she advocates for the rights of young people with disabilities.

One of her latest projects – a soft toy-making club for youth with disabilities – is having a profound impact. The club provides young people with disabilities not only with a source of income and new skills, but also friends and a feeling that their lives can be meaningful too.

The soft toy-making club started as a group of volunteers, and has now evolved into a small but thriving local business in Kapshagai. It employs more than 10 young people with disabilities. The toys they produce are being sold across Kazakhstan. And this, according to the group, is just the beginning.

The group of youth led by Lyazzat won a grant from the Youth Corps Program in Kazakhstan, supported by the Ministry of Education & Science and the World Bank. The program aims to support vulnerable youth in developing and implementing community projects. Lyazzat’s non-profit received US$3,000 to support the soft toy-making club. She set up the club in just one month and over 10 people volunteered to join her. 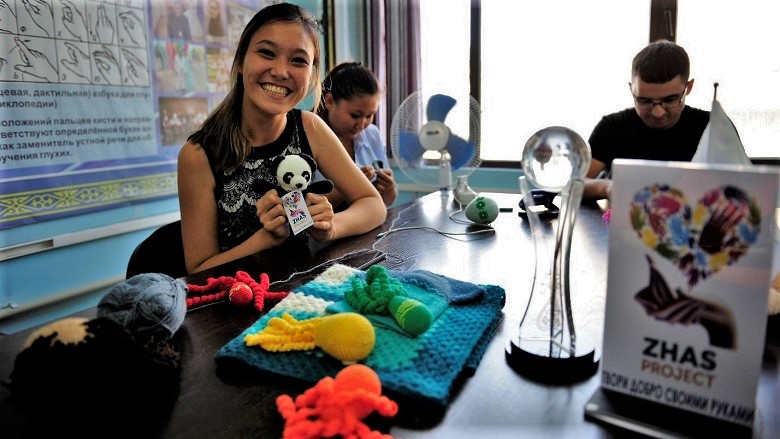 Amina Abdrakhmanova, a young member of the club. The project is part of the Youth Corps Program in Kazakhstan, supported by the Ministry of Education & Science and the World Bank. The program aims to support vulnerable youth in developing and implementing community projects.

"Others call us people with disabilities, but we call ourselves people with unlimited abilities,” says Lyazzat. “This project has opened up new prospects for many of us. It has become a second home for many of our members, and brought meaning to their lives. It was not easy to learn how to knit – many of us have difficulties with moving our hands – but through our community, we can support and encourage each other to keep on going.”

With resources the non-profit received through the Youth Corp Program, Lyazzat and her team were able to organize training courses on design and knitting techniques for the young people. They also received training on business management, budgeting and other important entrepreneurship skills. In the first five months of the project, Lyazzat and her team produced over 100 toys and children’s clothes, which were donated to maternity hospitals and oncology centers. 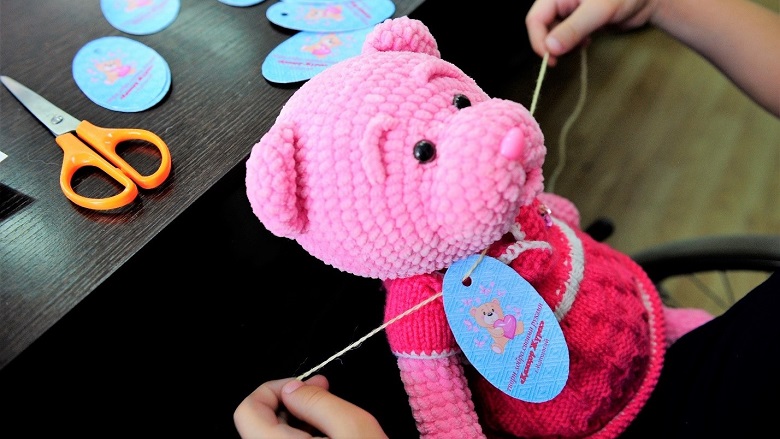 The soft toy-making club is providing young people with disabilities not only with a source of income and new skills, but also friends and a feeling that their lives can be meaningful.

“The club changed everything for me,” says Ainura, a 25-year-old member of the club. “Before I would just sit at home. I would sleep until three o’clock in the afternoon, because there was no reason for me to wake up. Nothing to do. With my diagnosis (epilepsy) I could not find a job after finishing high school, so my parents provided everything for me. But it’s difficult when you have nothing to do. Now that I have a job I have become more organized: I wake up early and go to work every day. I take care of all the paperwork for the soft toy making club and I also have other responsibilities. We do interesting projects, and I’m excited about our prospects.”

"Providing people with opportunities for a fulfilling life is a very important task, and this project is a bright example of how young people with disabilities can realize their potential, once given the opportunity,” says Lilia Burunciuc, World Bank Regional Director for Central Asia.

Building on their initial success, the team opened their first online store, started participating in city fairs, and took an active part in regional competitions. This has yielded great results: interest in their products is increasing, they are invited to every city fair by local administrations, and they receive around 80–100 orders every month. The average cost of each toy, made from eco-friendly materials, is between US$15 and US$30. 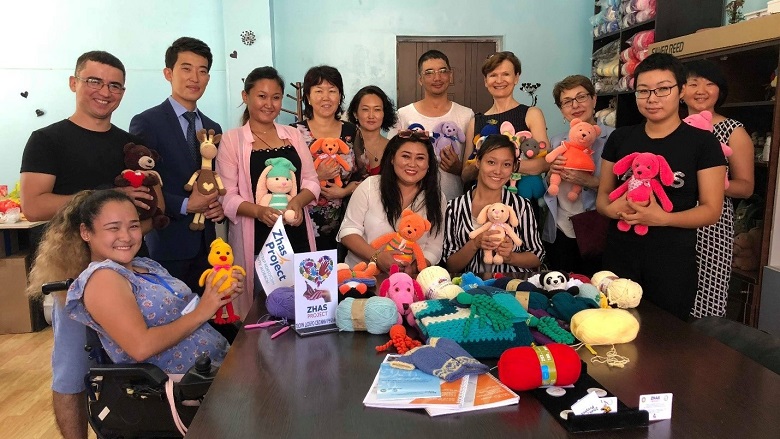 The club members together with Lilia Burunciuc, World Bank Regional Director for Central Asia. The soft toy-making club that started as a group of volunteers, has now evolved into a small but thriving local business in the town of Kapshagai.

Lyazzat and her team plan to expand the business further: the next stage is to open a workshop for knitted garments, where the main employees will also be young people with disabilities. They want to produce high-quality clothes in Kapshagai, for sale across the whole country.

Behind this business endeavor is another big dream.

“We want to establish a disability scholarship fund,” says Lyazzat “Although there are some opportunities available for youth with disabilities, these are not enough. We would like to make it possible for more young people to enjoy the full benefits of college education. I myself was lucky to get two degrees, and I know exactly what doors it can open. I want this to be the case for every young person with a disability in Kazakhstan.”

The Youth Corps Program aims to involve more young people, especially from vulnerable groups, in the activities of their local community, and to help them develop vital skills. Since 2017, more than 2,000 young people, who are not engaged in regular work or study, have taken part in various social and entrepreneurial initiatives. By the year 2020, the Program hopes to provide opportunities to more than 8,500 young people across Kazakhstan.